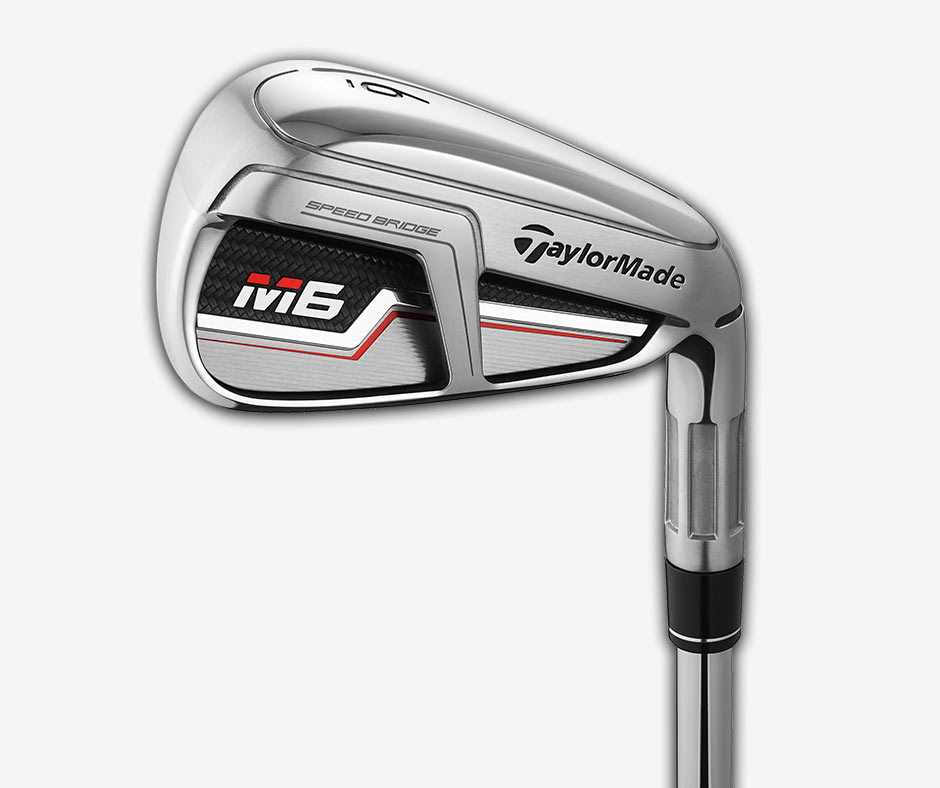 With a slightly larger club head, TaylorMade M6 irons are the more user friendly irons of the M-series family.

Featuring a thicker topline, wider sole and more offset compared to the M5 irons, the larger TaylorMade M6 irons should inspire confidence as they are even more forgiving than their M5 colleagues.

A high MOI (moment of inertia) makes them extremely stable and forgiving at impact yet it doesn't detract from their ability to maximise distance through every iron in the set.

While more forgiving irons often have an impact sound like an empty tin can being thrown down the road, the addition of the Speed Bridge provides the M6 with a genuinely pure impact sound to rival any iron on the market, and the soft feel that all golfers crave.

With the option of steel shafts (KBS Max 85) and men’s and women’s graphite shafts (Fujikura Atmos Orange and TaylorMade Tuned Performance 45, respectively), TaylorMade M6 irons are an option for golfers who prefer to keep it simple - those who don't need ball flight shaping, just long and forgiving irons that can make the game enjoyable again.

The new Speed Bridge runs the length of the back cavity and links the irons’ topline with the rear bar. It beefs up the strength and rigidity of the topline to direct previously wasted energy back to the ball at impact, which means extra distance becomes a welcome reality.

The Speed Bridge is also responsible for enhancing the feel of the new irons. It connects to the topline of the M5 and M6 irons at the very point where peak vibration occurs, in order to suppress it and provide the elusive soft-yet-solid feel that is so sought after by golfers.

OPTIMISED FOR FORGIVENESS AND PLAYABILITY

As high-performance game improvement irons go, they don’t get any more advanced than the new TaylorMade M5 and M6 irons.

TaylorMade designers have also incorporated a new, more flexible Speed Pocket on the M5 and M6 long irons (4-7) that was only possible through the addition of the Speed Bridge. The new Speed Pocket cuts deep through the sole to expand its flexibility and subsequently increase ball speeds and forgiveness, particularly on strikes coming out low on the irons’ ultra-thin face.

And the Speed Bridge has been perfectly matched with a new damping system called HYBRAR that is positioned behind the club face inside the M5 and M6 irons.

The HYBRAR system kills unwanted vibrations faster than an Uber driver on New Year's Eve and, together with the badges on the back of the M5 and M6 irons, improves feel and refines the irons’ strike acoustics. Even the adhesive used in the HYBRAR damping system has been selected for its ability to preserve the feel and aural characteristics that make TaylorMade M5 and M6 irons category leaders.

The slice of HYBRAR polymer also shores up TaylorMade’s famed Inverted Cone club face, which works hard to improve even the worst miscues by expanding the sweet spot of the irons.

Both irons also have a lower centre of gravity (CG) than the M3 and M4 irons they are replacing by saving weight high up on the club heads - through a fluted hosel and a topline with a 360 degree undercut - and repositioning it low in the club head for an easy-to-hit, high-launching ball flight.