The TaylorMade Spider web grows even larger with the release of four Spider Putters in 2021.

But adding to the Spider web of intrigue is the introduction of a new Pure Roll2 insert (on the Spider EX) and an expanded selection of hosels that provides a greater range of toe hang and face-balanced performance options.

The tinkering also extends to a customised True Path alignment system for each of the new putters, and a new fluted shaft that improves feel.

It’s all aimed at giving more players than ever the opportunity to experience the unerring stability, unrivalled consistency and unequalled performance of a TaylorMade Spider putter.

TaylorMade did some strategic planning before employing their True Path alignment system on the new Spider putter range.

They wanted to create a colour scheme that was best for focusing a player’s eye so they came up with … drumroll please … an entirely white colour scheme.

Set uniquely atop each of the four new Spider putters, the new True Path system provides visual acuity and feedback on both target line and stroke path for more accurate putting - and will boost confidence out on the greens. 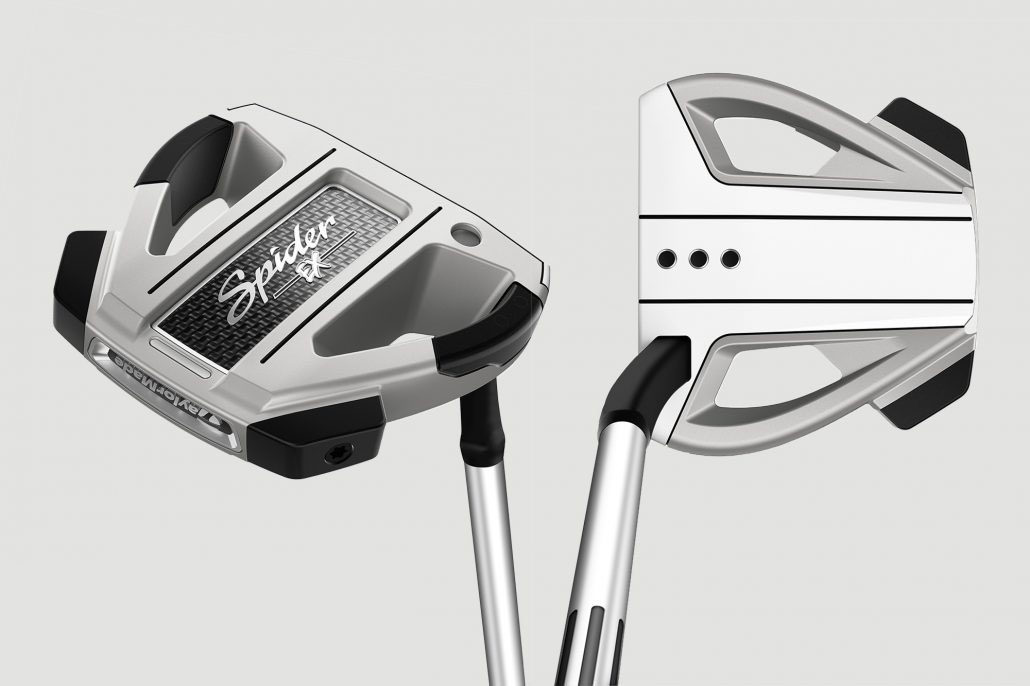 The TaylorMade Spider EX putter is a completely new model, taking the form of the Spider X putter but upscaling it slightly and rounding off the rear section.

The Fluted Feel shaft features a softer tip that improves feel without affecting the stability of the Spider EX.

And speaking of feel, the EX receives a new co-moulded Pure Roll 2 insert, which combines a urethane surround with eight aluminium beams (set at a 45° angle) to improve roll, feel and consistency and it links with the new True Path alignment system running through the centre of the putter.

The Spider EX is fitted with a SuperStroke Pistol grip and is available in three colour schemes: Platinum/White, Navy Blue/White and Ghost White.

A short slant neck, flow neck and single bend hosel are available on the Spider EX, with the slant and flow neck providing toe hang (28° and 20°, respectively) while the single bend is face balanced. 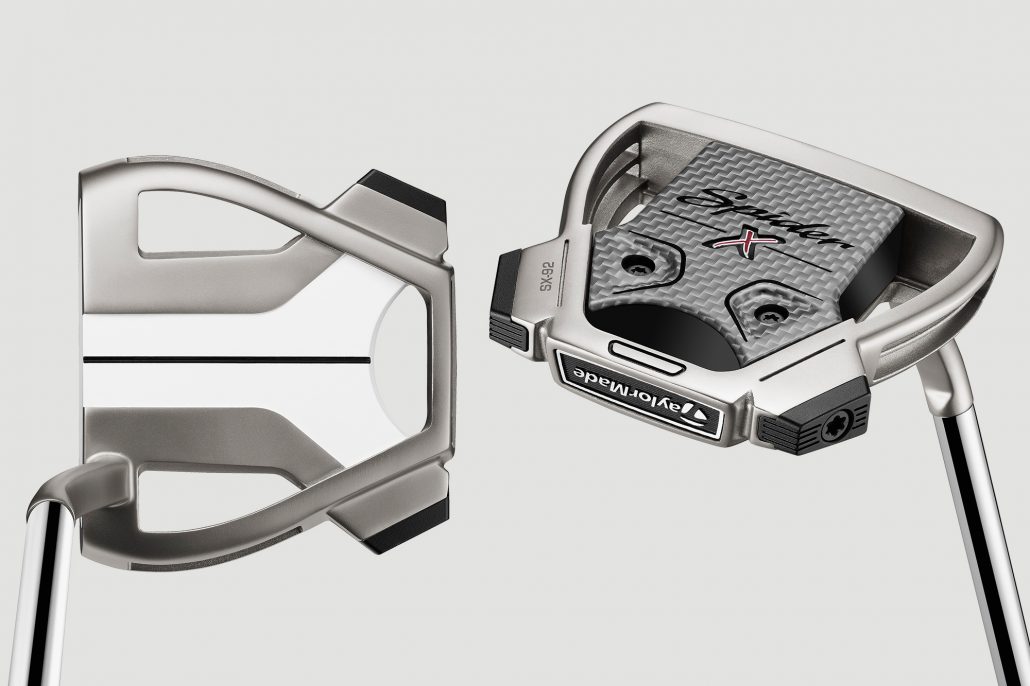 The TaylorMade Spider X, a more compact version of the original Spider, is a fairly new addition to the franchise – it was first released in 2019 - but has quickly become the most popular and successful model in the Spider franchise.

As such, TaylorMade haven’t changed much in the 2021 Spider X, apart from offering it in a bare metal version – the Hydro Blast.

Hydro Blast refers to the finishing process used on the putter, with the aluminium body receiving a blast of high-pressure water to create a smooth, uncoated surface.

Surprisingly, the Spider X isn’t too hard on the eyes in the full glare of the sun, with a matt finish absorbing, rather than reflecting the light.

And in case you were wondering about a raw finish and potential rust, the Spider X Hydro Blast’s aluminium won’t corrode like an unpainted steel surface would.

The Spider X Hydro Blast is available in a single bend (face balanced) and flow neck (21° toe hang) and is fitted with the original Pure Roll insert, a stepless KBS shaft and a Super Stroke pistol grip. 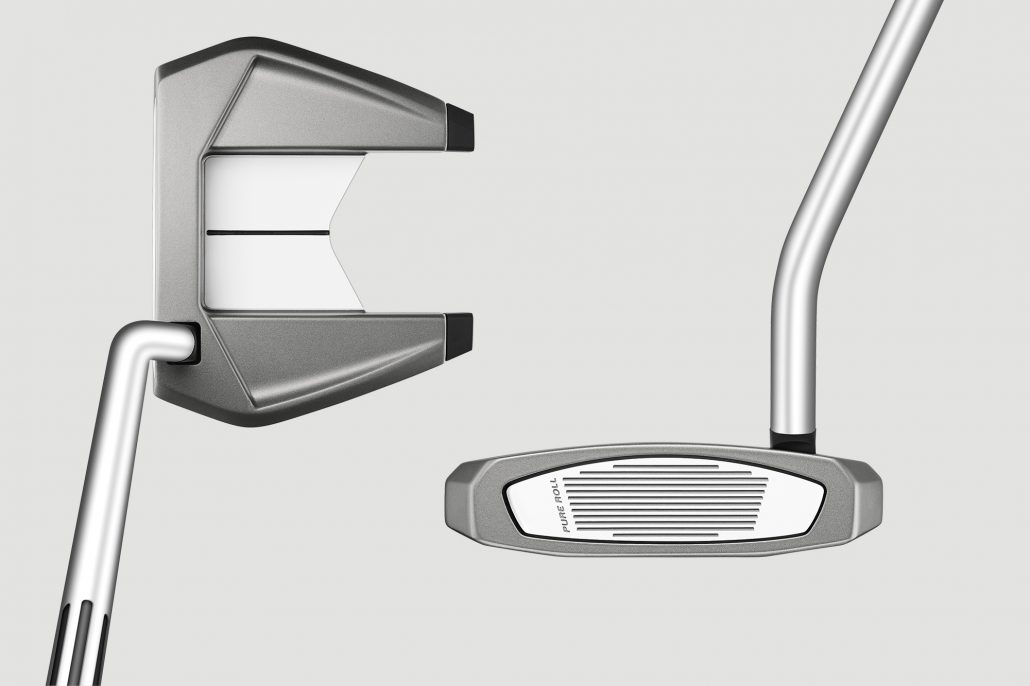 A new putter for 2021, the TaylorMade Spider SR is a close relation to the Spider S but diverges in a couple of key areas.

Slightly more compact in size, the rear tungsten bar that appears on the S has been removed, replaced with large weights on the wings instead.

And the Spider SR’s True Path alignment is shifted to the rear cavity, rather than the top line position in the Spider S.

SR stands for ‘stability refined’ which is what the SR is all about. It is one of the most stable and forgiving models in the Spider line-up and also features the new “fluted feel” shaft that enhances feel and response, along with the original TaylorMade Pure Roll insert.

The Spider SR is available in a single bend shaft (face-balance) or an L-shaped hosel (22° toe hang) configuration and is fitted with a Super Stroke pistol grip. 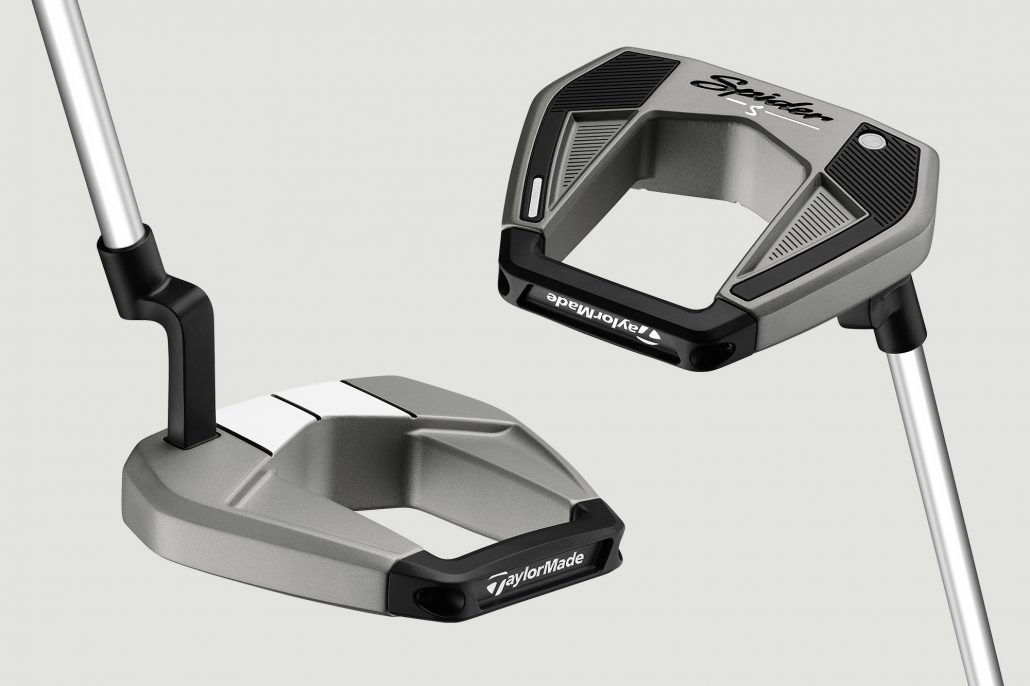 Introduced in 2020 the TaylorMade Spider S deviated from the vaunted Spider design by featuring a squarish fang/wing at the rear of the putter.

The design maximised forgiveness chiefly through a huge tungsten weight bar running along the back.

In fact, the Spider S is the most forgiving arachnid in the Spider line-up and, as such, TaylorMade didn’t touch a thing design-wise.

But the Spider S gets an alignment alteration with the inclusion of a True Path alignment system that has been inspired by archery, the Olympic sport where perfect aim and accuracy is the only way to win.

Best described as an arrow which sits on the topline inside the “fang”, the new aiming aid is the width of a ball and will help players find the centre of the ball at both address and impact.

Like the Spider EX, it gets the feel-inducing Fluted Shaft and the Super Stroke pistol grip, but has the original Pure Roll insert aboard.

Hosel options include the face-balanced single bend shaft or an L-neck hosel (22° of toe hang) which suits strokes that rotate the face open and closed.