US OPEN UPDATE 20/06/22: England's Matt Fitzpatrick completed a Brookline double after winning the US Open by a stroke from Will Zalatoris and Scottie Scheffler.

Playing in the final group on Sunday, Fitzpatrick parred the last hole to post a six-under total then had to wait until Zalatoris missed a birdie putt from 14 feet, which would've forced a two-hole playoff.

It was Fitzpatrick's first major win and it came at the same course, The Country Club at Brookline, near Boston, where he won the 2013 US Amateur.

The year’s third major is upon us and it’s the one known for being the toughest tournament in the world to win.

Here’s what’s happening at this year’s US Open: 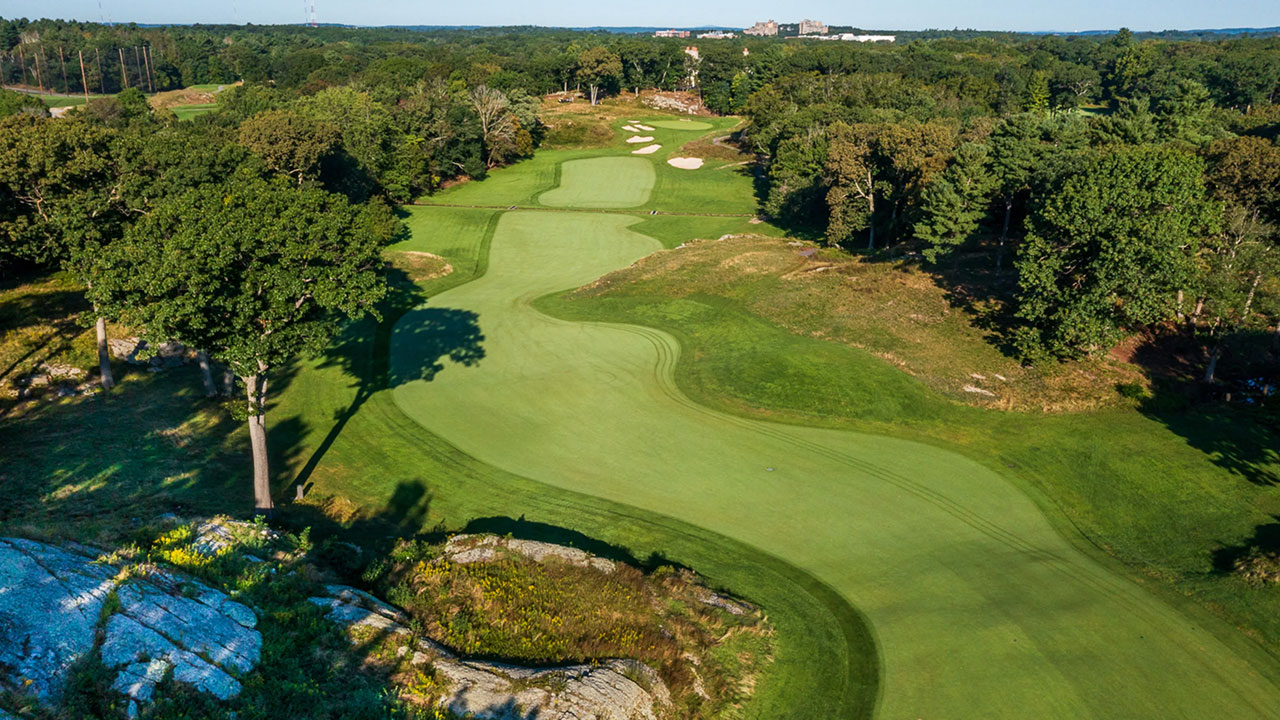 The Country Club in Brookline, Massachusetts, is one of the oldest golf clubs in America and offers a classic layout that will set up well in US Open trim.

Its first six holes were completed in the late 1800s, with more and more holes added in the ensuing years.

There are now 27 holes on the property, and this year’s Open takes in the best 18, which have undergone a renovation by renowned architect Gil Hanse.

The course last hosted a US Open in 1988, which was won by Curtis Strange, but it’s probably better known as the venue of the infamous Battle Of Brookline Ryder Cup in 1999 – a contest remembered for the US team’s massive final day comeback to beat Europe and some staggeringly unsportsmanlike behaviour by some of the US team and the local fans. 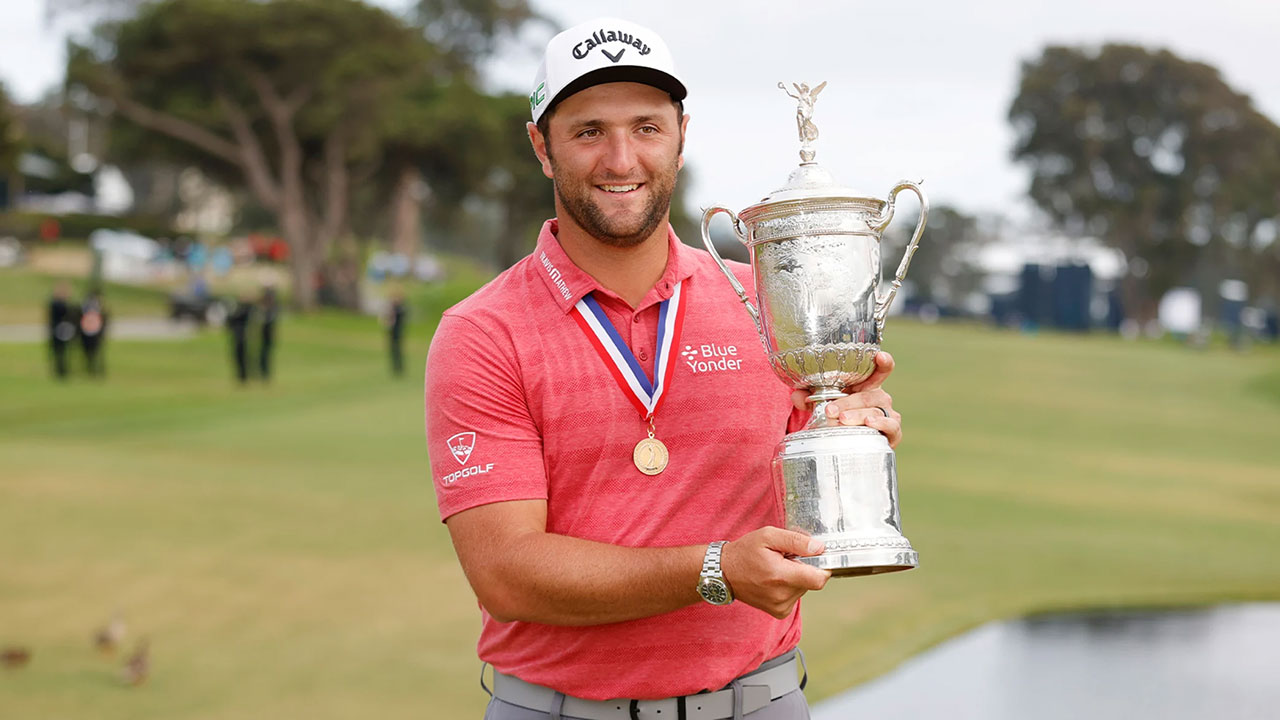 At last year’s US Open, Jon Rahm finally accomplished what most observers of the game thought was a given when he turned pro back in 2016.

He won his first major at Torrey Pines, and there seems to be no reason why he can’t become the first back-to-back winner of the US Open since Brooks Koepka in 2017-18.

Rahm just loves the fight and the Spanish superstar has the perfect mix of brilliance and downright grit that always makes him a threat when the majors come around.

He won the Mexico Open in May, his first win since Torrey Pines, but a top 10 at the Memorial at his last start has him heading in the right direction coming into Brookline.

Of the seven Australians in the field at Brookline, it’s clear Cameron Smith is the pick of the bunch.

The Queenslander hasn’t won since his massive Player’s Championship victory in March but is clearly Australia’s best hope of becoming the first US Open winner since Geoff Ogilvy in 2006.

Cam started well at the PGA Championship but couldn’t sustain it, with an ugly third round highlighted by a wild drive that hit fellow competitor Aaron Wise on the head while he was waiting to play on an adjacent fairway.

Smith still finished tied 13th, the same result he had last time out at the Memorial, and if he can break even with his driver over four rounds, his bulletproof short game should keep him right in it.

You could kind of see this one coming after witnessing Tiger withdraw from the PGA Championship after the third round.

Tiger’s limp was pronounced throughout the tournament but it was hard not to notice him struggling mightily to walk around Southern Hills in the third round, where he shot his third-worst ever score in a major.

It’s a blow to the impressive comeback the 15-time major winner was mounting after making his first appearance in over a year at the Masters following his LA car crash.

But while Woods focuses on his rehab and getting his body right rather than playing at Brookline, he’s determined to line up at the 150th British Open at St Andrews in July.

THE MOST DEMOCRATIC MAJOR

The US Open’s qualifying series gives everyone a chance at earning a spot in the national open.

It’s known as the most democratic of golf’s four majors, with a large proportion of the field gaining their spot via a series of regional qualifying tournaments.

Anyone with a maximum handicap of 1.4 can enter and this year, 8800 amateurs and pros teed it up in local 18-hole qualifiers, with 530 making it through to final qualifying.

Those 530 players took on what’s known as the longest day in golf, with nine sites in the US and Canada hosting 36-hole final qualifying tournaments on Monday, June 6.

Sixty-five players ultimately progressed out of final qualifying and into the 156-man field at Brookline.

The last qualifier to win the US Open was Lucas Glover in 2009.

With all that’s going on behind the scenes in the golf world, it was refreshing to see Justin Thomas break through for his second major win at the PGA Championship.

He was the only big fish lurking on the final day, with the fourth round leaderboard resembling a Korn Ferry Tour All Stars team.

But he truly deserved the win after being on the worst side of the draw for the first two rounds and playing by far the best golf over the weekend.

Is having ‘Bones’, Phil Mickelson’s former caddie on the bag, making the difference? Justin himself said it was, after his caddie delivered some tough love ahead of the final round at Southern Hills.

One day, Willy Z is going to get it done in a major – and with the best ball-striking ability in the game, the US Open at Brookline could be the one.

Zalatoris didn’t do much wrong when losing the playoff to Justin Thomas at the PGA, and his previously sketchy putting seemed pretty solid all week long.

If any tournament is set up to test ball striking, it’s definitely a US Open and Zalatoris doesn’t miss too many greens, fairways - or anything, really.

If he putts well, he’s a big chance.

Herbert will play his second US Open while Lee makes his debut, which has become a little more interesting since his sister Minjee won the US Women’s Open last week.

Morgan and Sinnott will make their first appearance in a major at Brookline, with young gun Morgan exempt after winning the PGA of Australasia money list and Asian Tour regular Sinnott winning his place at the US Open final qualifying tournament in Japan.

It was a heartbreaking finish at the PGA but for Mito Pereira, but ‘whatever doesn’t kill you just makes you stronger’ should be his mantra for the US Open.

Leading by a shot with one hole to play, the Chilean hit his drive into a creek, leading to a double bogey and leaving him a shot outside the playoff.

The good news? Mito has banked a top 10 finish at the Charles Schwab Cup at his next start and was 13th at the Memorial, where he made an albatross in the final round.

Let’s hope Mito can numb the pain at the US Open.

Phil finally re-emerged after his self-imposed solitude at a LIV London press conference last week where he confirmed he’s all-in for the Shark/Saudi tour.

And yeah, he’s playing at the US Open, too.

While Phil’s won six majors, none of them have been a US Open. And it’s a nagging hole in his stellar playing career that he desperately wants to remedy.

After so many months sitting on the sidelines, you’d have to be optimistic to think Phil can get it done at Brookline.

But after Kiawah Island in 2021, it’d be unwise to rule Phil out of achieving the impossible.

And snagging a US Open would be the best way to announce to the world that Lefty is back.

Col’s been awfully quiet of late, which has been odd for a player who dominated last year.

Winner of the 2021 British Open and 2020 US PGA, Morikawa hasn’t done much since finishing fifth at the Masters in April.

One of the most naturally gifted ball-strikers of all time, it seems part of Collin’s problem is with the flatstick.

The solution might be the TaylorMade Spider GT Rollback mallet he played at the Memorial last start, which replaced the TaylorMade Juno blade that he won at Royal St Georges with.

At a US Open, making clutch par putts is what keeps you in the tournament and if the Spider GT does the trick, major No.3 might be there for the taking.