It’s true that golf is a game of feel but sometimes to recapture those right feelings, you need a fallback option. And when the going gets tough, the tough usually get a launch monitor.

Rather than hacking it around and hoping your swing eventually comes good, there’s nothing more irrefutable than data - concrete measurements that reflect the true state of your ball flight and swing.

While launch monitors are a common sight on the driving range at tour events, the investment required to get into a high-end Trackman-like set-up is prohibitively expensive for those of us who aren’t earning a Tour-grade income.

However, there are several flight monitors that provide outstanding feedback for a fraction of the price.

Four of the best are from  SkyTrak, Garmin, FlightScope and Rapsodo and each system offers a slightly different angle on the rapidly expanding genre of golf technology.

The new kid on the block is the s Garmin Approach R10 launch monitor, a lightweight device that is small in size but packed with features.

Powered by Doppler radar technology, the phone-sized R10 is equally effective indoors or outside. And connected with the Garmin Golf app, it monitors an impressive range of swing and ball metrics with both accuracy and speed.

All the usual suspects are there, including ball and club head speed, total and carry distance, smash factor, apex height, spin rate, spin axis, angle of attack and launch angle.

But the inclusion of clubface angle and club path monitoring – previously the domain of the more expensive group of tour-grade launch monitors - well and truly puts the Garmin Approach R10 in the frame.

The new face angle and club path measurements link well with the Garmin R10’s new Swing Capture mode, which is accessed through the Garmin Golf app on a phone or tablet.

Swing Capture automatically records a video of a swing, then overlays the footage with key metrics and stores it in the cloud for further analysis.

It’s a powerful tool to fast-track improvement, helping golfers connect what the statistics are telling them with what the visual is showing them.

It’s handy for bag mapping purposes while a visual dispersion chart of each club highlights shape trends to provide insight on where to improve.

Designed to be portable, the Garmin Approach R10 comes with a tripod and a separate phone mount to improve the viewing and accessibility of the app.

The R10 also performs well as a simulator, with the Home Tee Hero (part of the Garmin Golf app) providing a basic simulation experience on over 42,000 real-life courses.

The Approach R10 is also compatible with the E6 Connect simulator, which is among the most photorealistic around – however, it requires a separate subscription.

Garmin Approach R10 Launch Monitor Details: iOS, Android compatible. Up to 10 hours of use per charge. 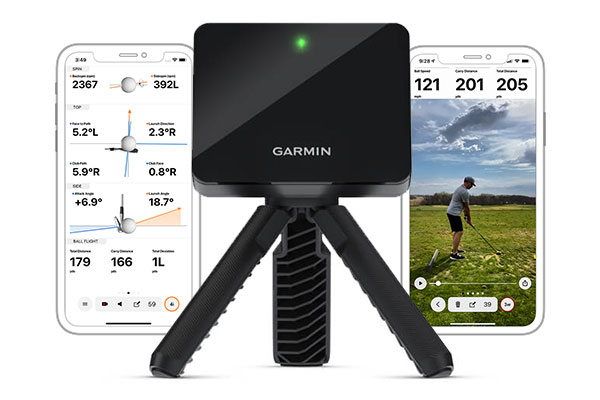 Launch monitors come in many shapes and sizes but the  Rapsodo Launch Monitor (MLM) is definitely one of the most compact, and with only 30 seconds of set-up time it’s also one of the most stress-free to use.

The Rapsodo system uses your phone’s camera to automatically record a video of every shot you hit, then analyses it to produce shot data and flight path information in the free Rapsodo app that needs to be installed on your iOS device. The launch monitor needs to be looking down the line and requires at least 30 yards of ball flight to be able to track and record accurate measurements.

If you’re a fan of shot tracer when watching tournament broadcasts (that ball-tracking line that Rory always seems to make dead straight on his drives), the Rapsodo launch monitor can also do the same for your shots. Now you can finally see what your shot tracer arcs, or should that be scribbles, look like in comparison to Rory’s clean lines.

Using the Rapsodo launch monitor is also a happily hands-free experience, with each swing videoed, recorded and enhanced with shot tracer before being overlaid with its respective data and stats – all without you needing to do anything. And the system can also recognise when you have switched clubs so you don’t have to stop and input anything on the app.

A real strength of the Rapsodo launch monitor is that up to 100 swings can be saved on the app, but there’s also an option to upgrade and increase that number.

The system also uses your device’s GPS capabilities to display where your shots have landed on a map of the course/driving range you are practising at. It offers a quick overview of shot dispersion and is available as part of the Rapsodo golf app that comes with the launch monitor.

The app also offers a bag mapping function as well as stats such as average distance, dispersion, trajectory and deviation for each club in your bag. And for entertainment value, there is a long driving and closest to the pin contest.

At this stage it is an outdoor-only launch monitor so can’t be used in a home simulator capacity. But there are plans for a software update to make it function indoors, so stay tuned.

In comparison testing with a high-end Trackman launch monitor, the Rapsodo was within 2.5 per cent accuracy of the market leading system – not bad for a system that is a fraction of the cost of a high-end machine.

Rapsodo Launch Monitor Details: iOS only, no Android support. 8 hours of use per charge.

Arguably the hottest golfer in the world right now, Bryson DeChambeau, has always been a data disciple when it comes to understanding his game and swing.

His tour nicknames of “Rainman” and “The Scientist” would indicate he is just as comfortable trying to comprehend the physical theory and numerical indicators of his golf swing as he is unleashing 427-yard drives down the fairway.

Given that, it’s not surprising that Bryson is a devotee of the new  FlightScope Mevo Plus, a launch monitor that uses Doppler radar to gauge a range of ball flight and club path variables.

Effective in both low-light indoor conditions or in direct sunlight outdoors, the FlightScope Mevo+ is a breeze to set-up. It needs to be placed just over 2m behind the ball to pick up flight path but doesn’t need to be repositioned to accommodate both left and right-handed golfers.

And forget fussing around with those frustrating connectivity issues because the FlightScope Mevo+ automatically pairs to your iOS mobile device via Bluetooth. And just as fuss-free are the three FlightScope apps that come with the launch monitor to convey all the essential information in a clear and easy format.

The FlightScope Golf app is the basic platform to observe statistics and data. It also offers a handy feature to record video of your swing through the app, which is then overlaid with the resulting data for future reference. Then there’s the FlightScope Skills app, which features several target-practice games and skills challenges to keep your sessions fun and engaging.

Also included is the E6 Connect app, which links the Mevo+ to the most realistic golf simulation software in the world. It offers a chance for golfing tragics to play five different courses – Stone Canyon, Sanctuary, Wade Hampton, Aviara and The Belfry – and 17 different driving ranges in a home simulator environment. The FlightScope Mevo+ is also compatible with The Golf Club and Creative Golf 3D simulation software.

FlightScope are the experts in the launch monitor game, with the X3 model offering tour-level accuracy and the original Mevo at the opposite end of the spectrum. The original  FlightScope Mevo measures only eight basic parameters: carry distance, club head speed, apex height, flight time, ball speed, spin rate and vertical launch angle but like the Mevo+, offers insights and analysis into those parameters through the FlightScope app. The new FlightScope Mevo+ sits in the middle of the two but uses the latest technology to offer almost comparable accuracy to the most expensive launch monitors on the market while being easily integrated into a home simulator setting.

You probably won’t be bulking up like Bryson to add length to your game, but you can science the heck out of it just like Bryson does, using the FlightScope Mevo+ launch monitor.

FlightScope MEVO and MEVO+ Launch Monitor Details: iOS and Android are support.1.5 hours of use per charge.

If you’re looking for a launch monitor that offers big bang for your buck, especially if you have designs on eventually turning that spare junk room into an awesome home golfing simulator space, then the  SkyTrak launch monitor is ready and waiting for you.

The SkyTrak model isn’t the cheapest launch monitor on the market but it’s still a good deal less than the price of the top-end models favoured by teaching pros and touring professionals. But according to independent testing, it produces results that are pretty much equal to its higher-priced counterparts in many aspects.

It uses a high-speed camera, rather than radar, to capture images of the ball’s behaviour in the first few feet of its flight, providing almost instant feedback on variables such as ball speed, launch angle, back spin, side spin and spin axis, which are displayed via the SkyTrak app on a remotely connected device.

The unit needs a flat surface to produce reliable data and requires repositioning to accommodate left and right-handed golfers. It also gives users the option of inputting real-life settings, such as wind velocity and direction, air temperature and humidity, to ensure simulated shots reflect real-life conditions.

While it doesn’t track what’s also happening with the club like the high-end monitors do - with club path angle and angle of attack measurements - SkyTrak does include an estimate of club head speed determined from the ball speed analysis. But in saying that, there’s more than enough evidence in the ball data to help most golfers recognise the good and bad in each shot they hit.

Ease of use is a high priority for SkyTrak and it’s hard not to be impressed with how quickly the launch monitor can be set-up and connected. The app is also simple to use and navigate, an important consideration given the number of times it will be referred to after every shot.

The SkyTrak launch monitor is small enough to fit in a golf bag and can be used outdoors or indoors, where it can be easily integrated into a full home simulation set-up – preferably with a very large and heavy net, high ceiling and to be on the safe side, minimal windows.

While the basic package, which is included in the purchase price, offers a virtual driving range, there are two additional subscription levels that offer deeper access and analysis through the app’s features – such as bag mapping and distance stats - as well as the opportunity to play the world’s best courses.

SkyTrak will maximise your practice routine and get those right feelings returning to your game. As Tiger’s old coach Hank Haney will attest, the SkyTrak launch monitor is hard to beat.

SkyTrak Launch Monitor Details: iOS, Android and Windows PC compatible. Up to five hours of use per charge.