In May 2021, the world’s best players finally got to experience golf like the rest of us.

Before you begin imagining massive slices off the tee, fat iron shots, shanks and three-putts from gimme range, it was more about the equipment they use. And if you guessed they were able to use a laser rangefinder in a competition round, then you’re 100 per cent correct.

The PGA of America permitted competitors to use laser rangefinders at May’s US PGA Championship at Kiawah Island, the first time the devices could be legally used at a major. It was news to Tony Finau, who heard about it for the first time two days out from the start of the event, but even Phil Mickelson had his rangefinder out at various points during his most dramatic of wins. 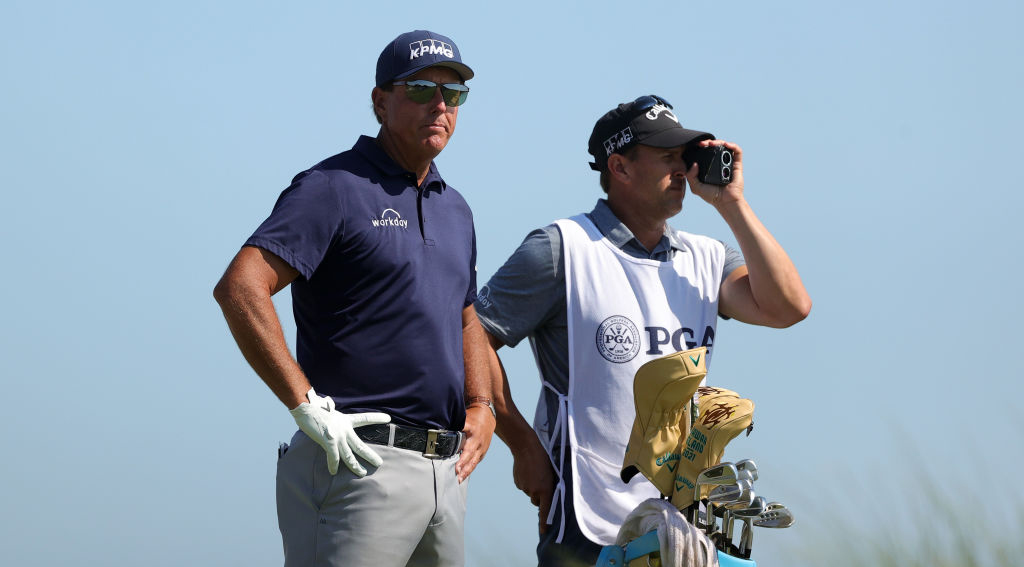 It was a pragmatic decree designed to speed up the pace of play, with rounds stretching out to well over five hours in majors heaving with capacity fields.

As most amateurs can attest, laser rangefinders provide ultra-accurate distance measurements in the blink of an eye, banishing indecision and helping play move along at a much faster clip out on the course.

We have put together a list of the best best rangefinders available at GolfBox:

The Tour V5 is Bushnell’s leading non-slope laser rangefinder, and it is quick and simple to use.

Featuring Bushnell’s renowned JOLT technology, which provides visual and tactile confirmation that a pin has been located, the Tour V5 has a range of between 4.5-1188m and can lock on to a pin over 365m away.

Distances can be displayed in either yards or metres and a magnetic BITE mount allows the rangefinder to be attached securely to the metal frame of a cart.

The major difference between the Tour V5 and the Tour V5 Shift rangefinder is the inclusion of a slope function.

The Tour V5 Shift can calculate the elevation change between a player and the locked-on target to provide a ‘plays like’ distance.

It gives golfers confidence in club selection, but the slope function can be easily turned off via a button on the side of the unit.

With it switched off, the Tour V5 Shift becomes a conforming device for competition use, which was the case at the US PGA Championship.

Comparing the Bushnell Pro XE with Bushnell’s Tour V5 twins can be summed up with two words: another level.

Like its Bushnell Tour V5 Shift contemporary, it has a slope function to account for elevation (which can also be switched off).

But the Pro XE adds in a couple of extras by evaluating temperature and atmospheric pressure to provide the most accurate ‘plays like’ distance in the game.

The unit also has offers superior magnification of objects through the viewfinder (7x compared to 6x in Tour V5 models) and it is completely waterproof.

Combining a laser rangefinder and GPS data, the Garmin Approach Z82 is one powerful unit out on the golf course.

It is accurate to within an astonishing 10 inches when targeting pins with the laser but paired with the Garmin Golf app on your phone, it offers a horde of additional information unlike any other rangefinder on the market.

The unit’s slope toggle can display ‘plays-like’ distances, or be switched off for tournament play, and there’s also an arrow on the screen that depicts wind speed and direction.

In Pinpointer mode a red arrow on the viewfinder indicates where the pin is, which is perfect for blind shots or when attempting to cut the corner with a huge drive.

Pinloc mode automatically scans and provides to-the-flag distances; Priority Loc ignores background objects to highlight targets pinpointed within the focal view; and Scan mode offers the freedom to obtain distances to any object in the viewfinder, particularly with the unit’s x6 magnification providing a high-definition view of targets.

The 6000iM is water resistant and has an impressive range of 5-914m, with flags up to 300m away able to be detected, and a magnetic casing means it can be securely attached to a cart or buggy’s metal frame.

The Sureshot Pinloc 6000iPM is identical to the base 6000iM model but it has one important upgrade – it has a Pulse.

Pulse mode kicks in when a pin is locked, with the unit vibrating to confirm success.

It should stop those awkward moments when, after blowing your approach shot way through the green, you realise you were locked on to a different object to the pin you were seeking.

Like all Sureshot Pinloc models it is water resistant, rather than fully waterproof, and has a magnetic shell so it can attach to any metal frame.

At the top of the Sureshot range is the Pinloc 6000iPSM, which has all the bells and whistles of the previous two models, but with the inclusion of slope function.

And it means playing the right club won’t be an issue, especially when facing those nasty downhill shots from a side slope.

The Slope feature can be quickly disabled via a switch on the side of the 6000iPSM to make it a legal rangefinder for competition use.

A lightweight and compact performer, the Shot Scope Pro L1 delivers big bang for your buck.

It contains all the features, including a slope function for highly accurate uphill/downhill ‘plays like’ distance estimations (but it can be turned off to conform for competition play).

In Golf mode, the Pro L1 vibrates when it picks up a pin while in Continuous Scan mode the unit will measure the distance to whatever object is in focus in the viewfinder.

A choice of red or black viewfinder optics comes in handy in both low light or full glare situations and with an impressive range of up to 800m, the Pro L1 well and truly measures up (pun intended) to Bushnell, Sureshot, Stonehaven and Garmin laser rangefinders. 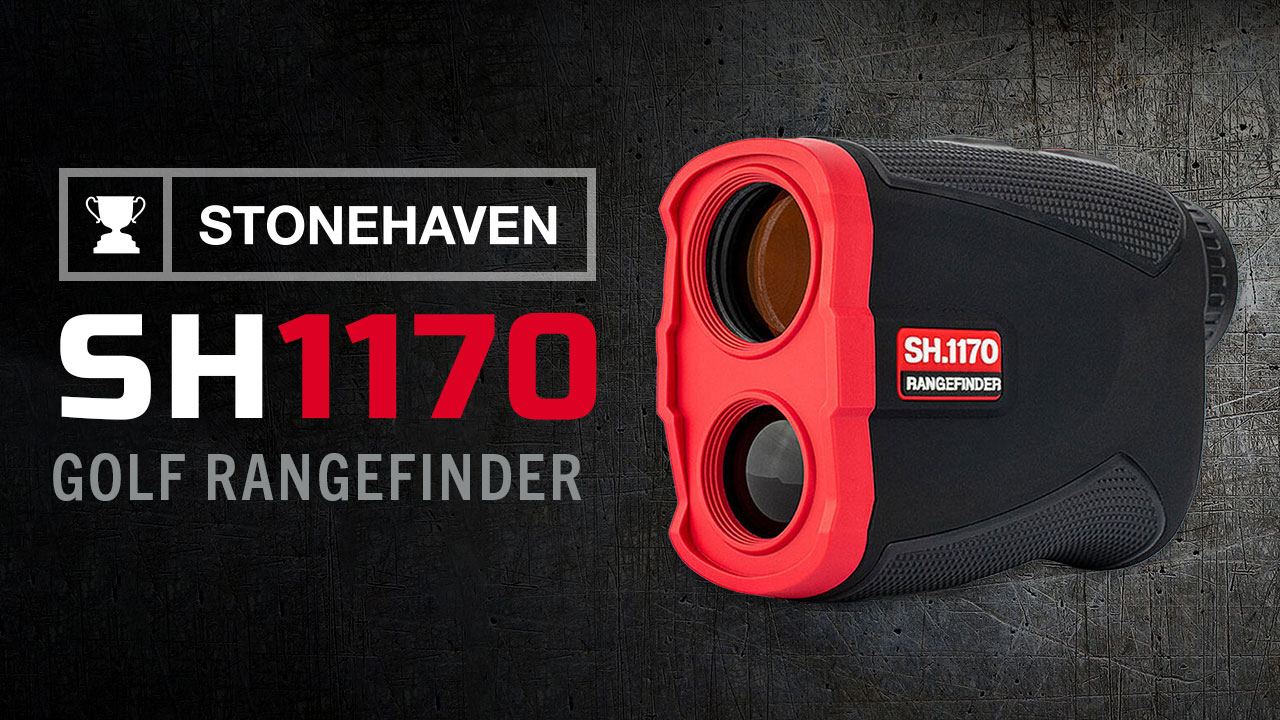 Ergonomically designed to fit comfortably in the palm of your hand, the Stonehaven SH1170 rangefinder offers accurate, confidence-boosting, yardages on demand.

Its slope function displays a ‘plays like’ distance that accounts for elevation changes but it can be disabled at the touch of a button.

Offering accurate yardages from 5-1170m, the unit vibrates when a target has been located and locked on to.

The rangefinder’s scan mode will measure the distance to any object focused within the unit’s 6x magnification viewfinder.

The Stonehaven SH1170 can be switched between yards and metres and is water resistant to cope with wet conditions out on the course.