After harnessing the power of artificial intelligence to sift through 15,000 different designs, Callaway are confident your best drives are about to get even better using the new Callaway Epic Flash driver.

The exhaustive design process yielded a new technology called Flash Face, which is the reason for the remarkable boost in performance when you nail a drive right out of the middle of the Epic Flash driver.

Flash Face delivers a big spike in the COR (the Coefficient Of Restitution, also known as the trampoline effect) in the centre section of the Epic Flash’s face, with faster-than-ever ball speeds and more distance the satisfying result when strikes ping out of that area.

The Callaway Epic Flash will have you grinning when those dead-centre drives – the ones you just know you couldn’t have caught any better - travel further than ever before.

The design phase of the new  Epic Flash driver was no ordinary, run-of-the-mill, shape-it-and-see process.

In fact, Callaway readily admit they would never have gotten close to achieving the performance gains in the Epic Flash if they used conventional design workflows.

AI was used to design the heights, sizes and configurations of the numerous ripples and humps that when combined, form the new Flash Face technology that is used in the Callaway Epic Flash’s face.

The performance of thousands of different Flash Face formations could be simulated through super-computer modelling, with AI learning what worked and what didn’t from each cycle, until the optimal configuration was determined after 15,000 repetitions.

In comparison, previous Callaway driver designs had between eight to ten iterations in order to compare performance.

While it’s hidden within the  Callaway Epic Flash driver, the Flash Face formation appears random, with no discernible pattern or symmetry like those deployed in Callaway’s previous VFT and X Face technologies. To the eye, the Flash Face design really could only have been conceived with the help of AI.

Despite being unconventional in appearance, the Flash Face configuration works in a very complex way to elevate the COR and generate extreme ball speeds from out-of-the-middle strikes in the Callaway Epic Flash driver. 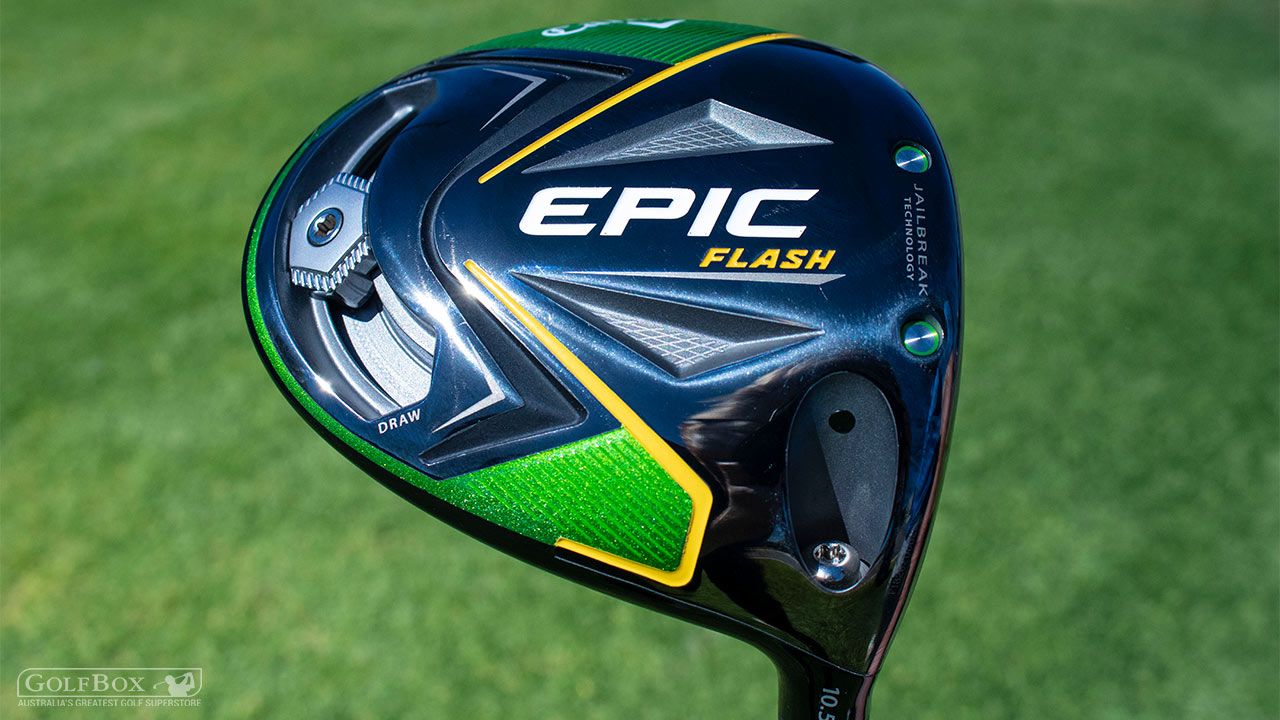 Callaway’s revolutionary Jailbreak technology, which made its debut in the 2017 Epic driver, is employed in the Epic Flash and teams up with the new Flash Face technology seamlessly.

The Callaway Epic Flash driver gets the lighter, hourglass-shaped titanium rods, like those used in the Callaway Rogue driver, to connect the crown and sole internally and stiffen the body.

At impact, the tension in the rods keeps the crown and sole from bulging, expanding the impact load of the face.

Jailbreak allows more energy to be imparted on the ball at impact, to lift ball speeds across all parts of the face. And in conjunction with the new Flash Face on the Epic Flash driver, ball speeds out of the centre region are boosted dramatically for an impressive lift in distance. 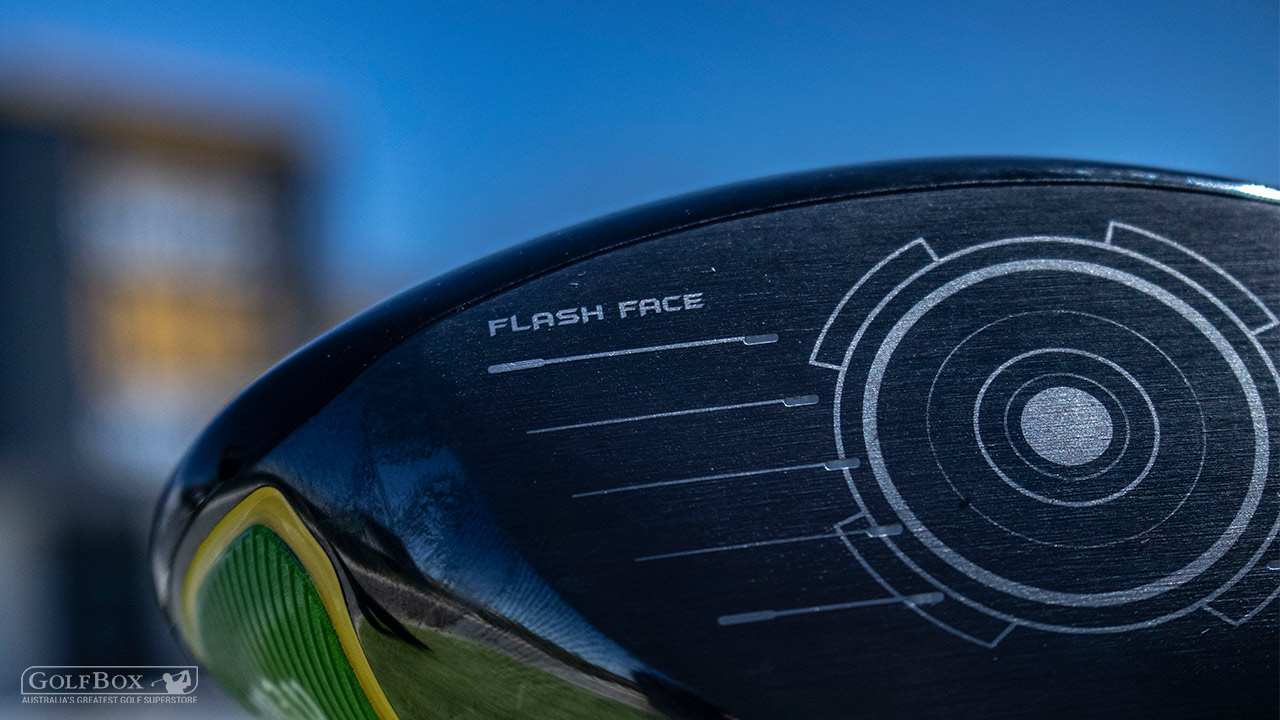 The Callaway Epic Flash drivers can be tweaked to produce different flight shapes by moving a weight along a perimeter track located on the sole.

Sliding the 16g weight will delicately adjust the Epic Flash’s CG (centre of gravity) to produce a draw, fade or straighten up your existing ball flight.

A new carbon fibre crown is also added to the Callaway Epic Flash, increasing the driver’s forgiveness through an improvement in MOI (Moment Of Inertia).

A tighter thread weave of the new T2C carbon fibre fabric makes the crown stronger and lighter and gave Callaway engineers the ability to shift weight to more advantageous areas lower in the sole, meaning more distance and accuracy from mis-hits off the tee. 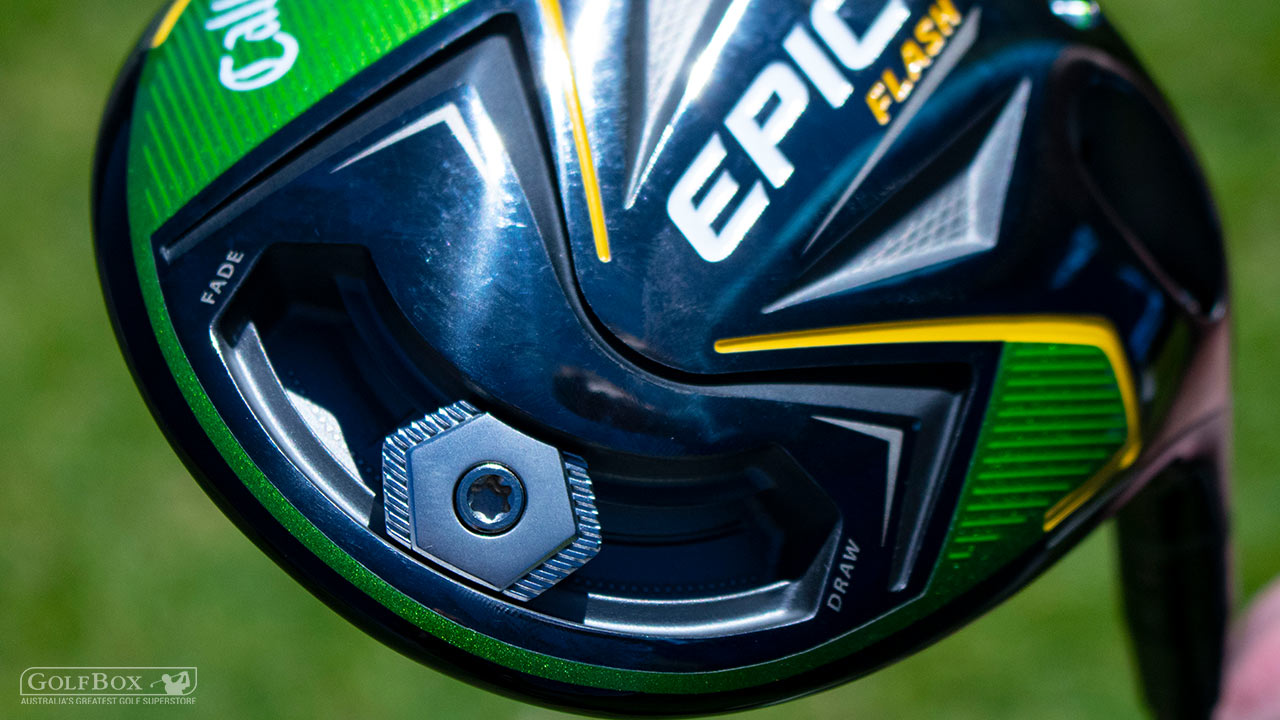 The Sub Zero version of the Callaway Epic Flash will appeal to golfers who generate high swing speeds and need to vent some excess spin.

Featuring the same AI-inspired Flash Face and Jailbreak tech that makes the standard Epic Flash driver such a monster off the tee, the Epic Flash Sub Zero has a permanent titanium weight on the sole that sits just behind the Jailbreak rods.

The sole weight, which can be customised during the ordering process, shifts the CG forward to produce a low-spin ball flight.

An adjustable perimeter weighting system is fitted to the Epic Flash Sub Zero, with a 12g sliding weight providing a variety of shaping options depending on where it is located.

It is the first time a Sub Zero has been fitted with a sliding weight adjustment, but Callaway have managed to engineer the Epic Flash Sub Zero to retain the low-spin, high-MOI characteristics that make it a favourite both on Tour and among the battlers at the local goat track.

The  Callaway Epic Flash Sub Zero is available in 9 and 10.5 degree lofts. 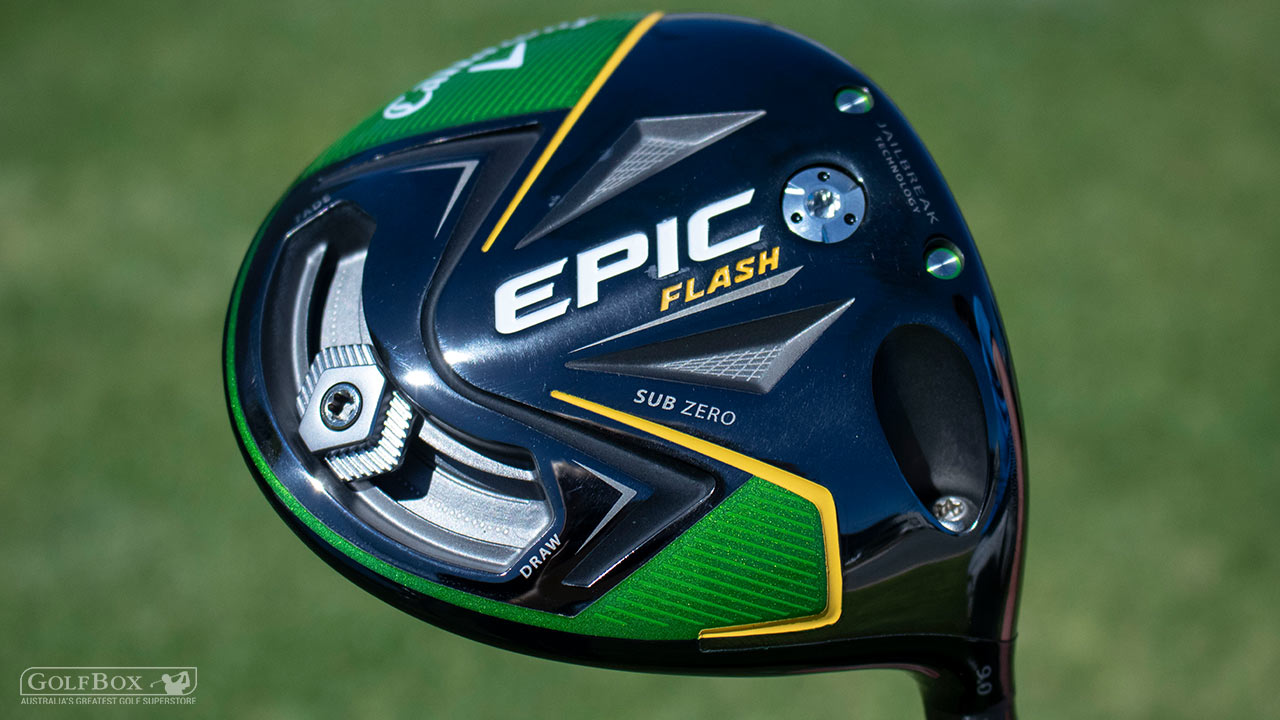 Callaway’s Flash Face technology has been such a revelation that Callaway have carried it straight over into their Epic Flash fairway woods.

Mimicking the Jailbreak-Flash Face combination of the driver, the new Callaway Epic Flash fairway woods have an increased COR across the span of the club face that boosts ball speeds from out-of-the-middle strikes significantly as well as those not-even-close mis-hits that occur from time to time.

The Epic Flash fairway woods have a thin 455 stainless steel face - which gets the Flash Face treatment - and are engineered to take advantage of Callaway’s established Face Cup technology.

A new Optifit hosel, which debuted recently in Callaway’s Big Bertha hybrids, allows players to adjust lofts up or down a degree to customise launch and ball flights. The new hosel is smaller and lighter than previously, with the resulting weight savings able to be diverted lower in the clubhead to aid MOI and forgiveness.

With the new  Callaway Epic Flash fairway woods at your disposal, you’ll start to view par 5s as genuine eagle chances thanks to the Jailbreak- Flash Face dream team. 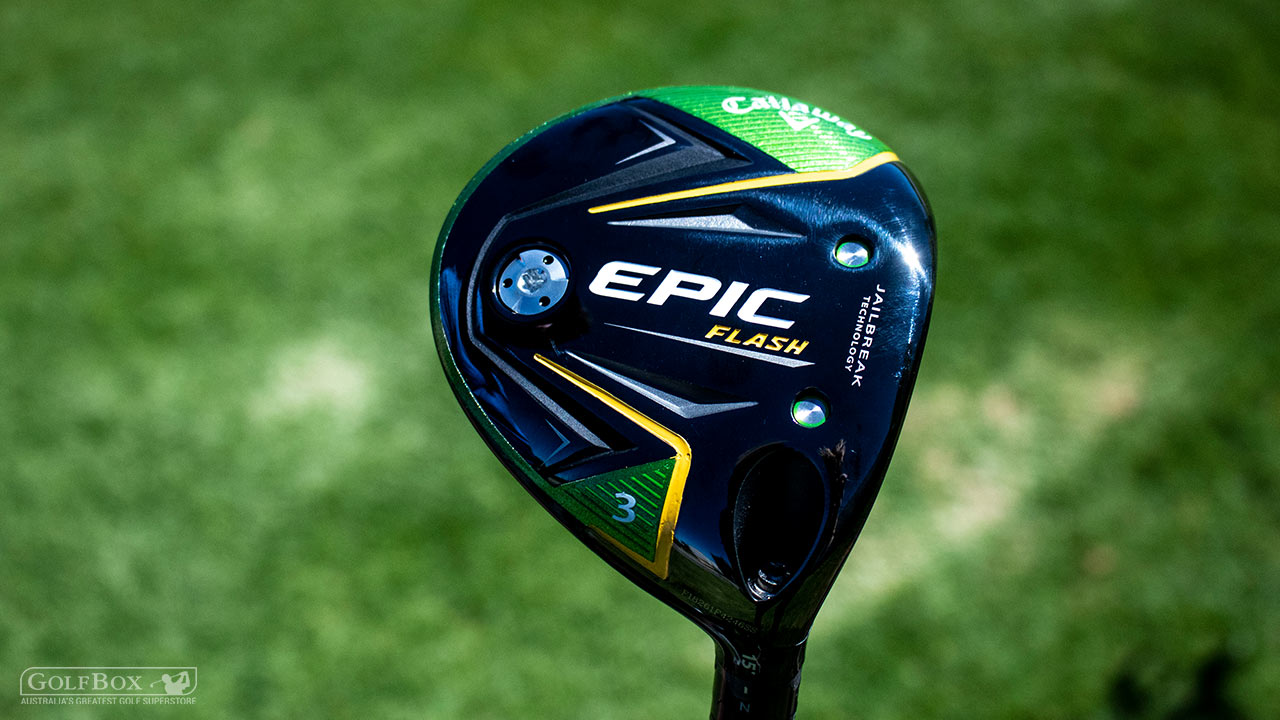 Like its driver namesake, the Epic Flash Sub Zero fairway wood is made for golfers seeking to limit spin.

Incorporating the same breakthrough Jailbreak and Flash Face technologies, the Sub Zero is almost identical to the Epic Flash fairway wood, apart from the presence of two sole weights.

The Callaway Epic Flash Sub Zero is a friend indeed for those who need a low-spinning fairway wood. 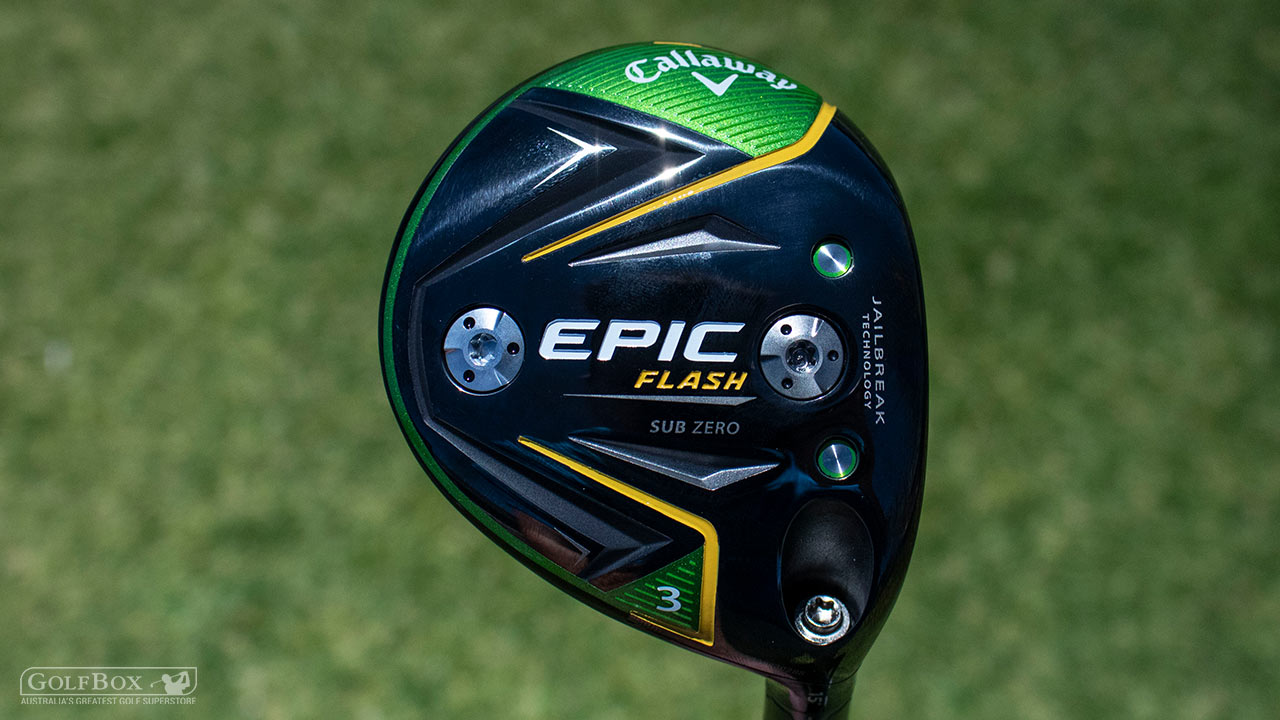