Ever had that lightbulb swing thought pop into your head? The kind that has you itching to get to the course or range to test it out, confident that you’ve discovered a potentially game-changing feel?

Or maybe you’ve been super keen of late to put in some extra practice to slice a few shots off your round, but life intervenes, and you spend more time sorting out your recycling rather than your short game?

If either of those scenarios conjures an air of familiarity, then the time has come to bring your practice time home and indoors.

Here’s how to practice golf at home, on any kind of budget. 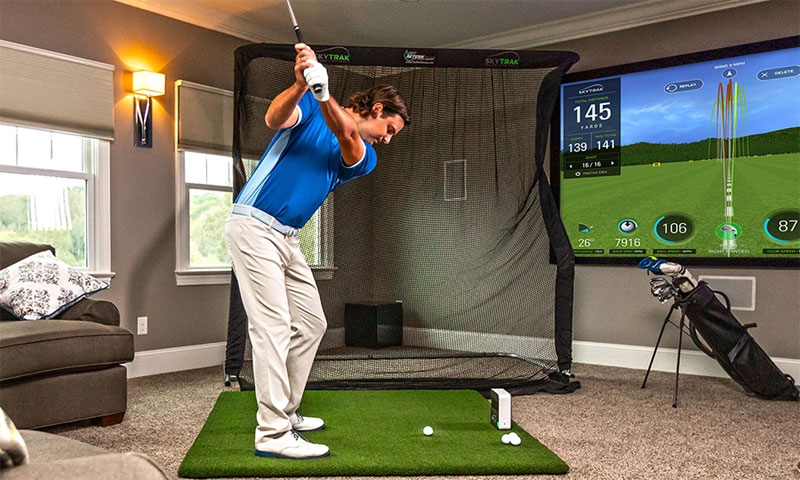 Before you get dive headlong into designing your new studio, there’s some very important homework to do first.

There’s one non-negotiable that needs to be decided very early on: the physical amount of space available within the confines of your humble abode.

If you have a space in mind in the house, garage or shed, march in there with the longest club in your bag (driver) and make a few slow and deliberate back swings to the top to see if you have adequate clearance.

If the ceiling is too low, you’ll need to either find another space or maybe scale down your plans (some launch monitors also require a minimum amount of horizontal space to function, but we’ll tackle that later).

If you strike out with the driver grab a short iron and repeat the drill; if there’s clearance, you can always leave the big dog in the bag and focus on crisping those short irons at home instead.

You’ve received the go-ahead from your spouse/housemates and sorted out a space sufficiently large and tall enough, so the ceiling won’t come crashing down on your cranium at your first attempt.

Now all you need to do is decide how big you want to go budget wise.

For under $260 you can get a basic facility, where you can happily smash ball after ball until your heart is content.

But spending close to $1100 will introduce a basic launch monitor into the equation: you can see your shot in full virtual glory via a screen of any description while also getting some useful data-driven insights into your swing.

And shelling out around $4300 will get you a full-blown home studio experience: a premium launch monitor that offers highly accurate analytics, which can be coupled to a software simulator to give you the opportunity to play an 18-hole round at famous courses around the world, all with the drink’s fridge within arms’ reach.

For all the technological wizardry of a launch monitor, there are a couple of more basic items that are just as important for your home studio.

You’ll need a hitting mat from which to thump balls from and a hitting net to catch them. And like most things, it’s better to go for quality on both fronts.

A good quality hitting mat will replicate the feel of real fairway turf, on which you’ll eventually be transferring your newly acquired hitting skills on to. And opting for a quality hitting net is a near necessity.

The average golfer hitting a driver will generate a ball speed of close to 130mph. At that speed, if the ball isn’t contained in a quality net, you’ll A) potentially injury yourself and B) peeve the other members of your household when your ball has escaped and caused carnage.

PUTTING IT ALL TOGETHER

From budget friendly bundles to the most lifelike and accurate simulator experience around, here are the best options for your home studio. 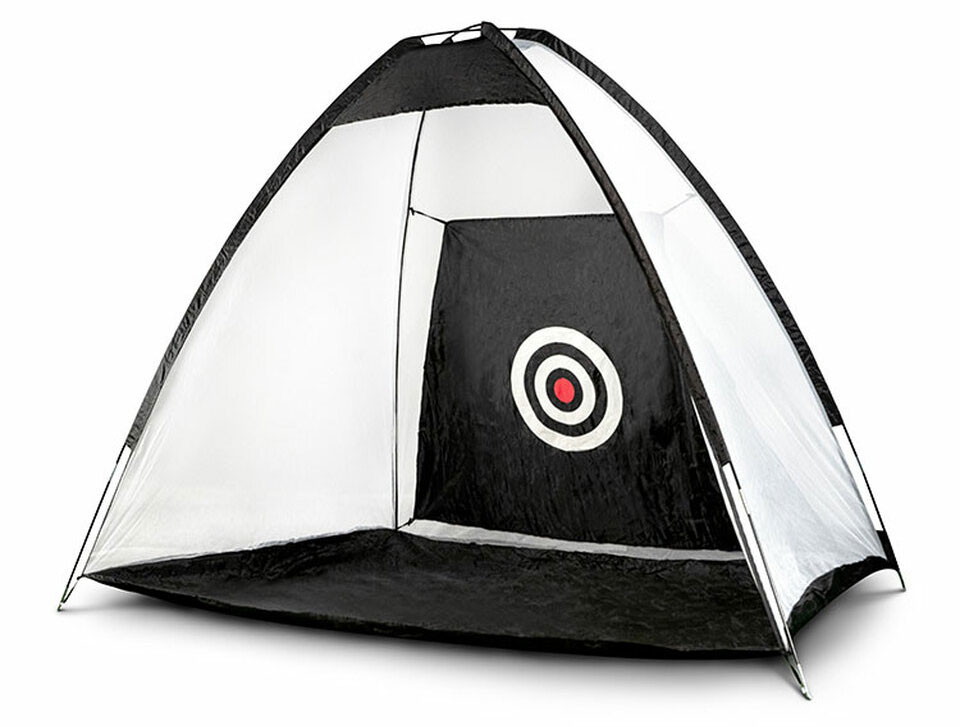 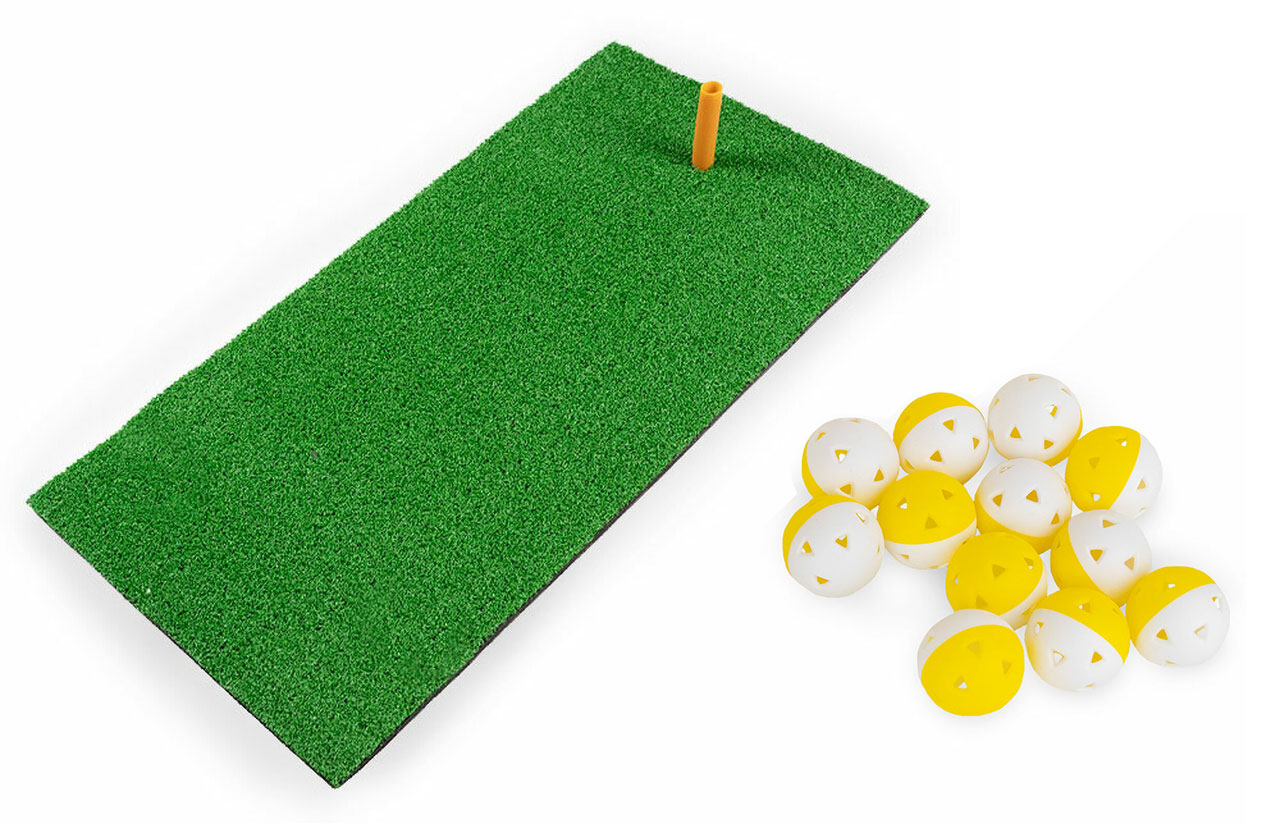 If you’re all for keeping things conveniently simple, the Stonehaven Net, Mat and Practice balls will serve you well.

The setup is ideal for small spaces and includes a 2.2 meter net, a pair of rubber tees and a hitting mat that replicates fairway lies.

A dozen limited flight practice balls completes the setup, so you can practise you’re driving, irons and wedge game in your new home studio, at any time of the day, or night.

And if you don’t want to make it a permanent fixture indoors, it’s easy to setup and pack down. 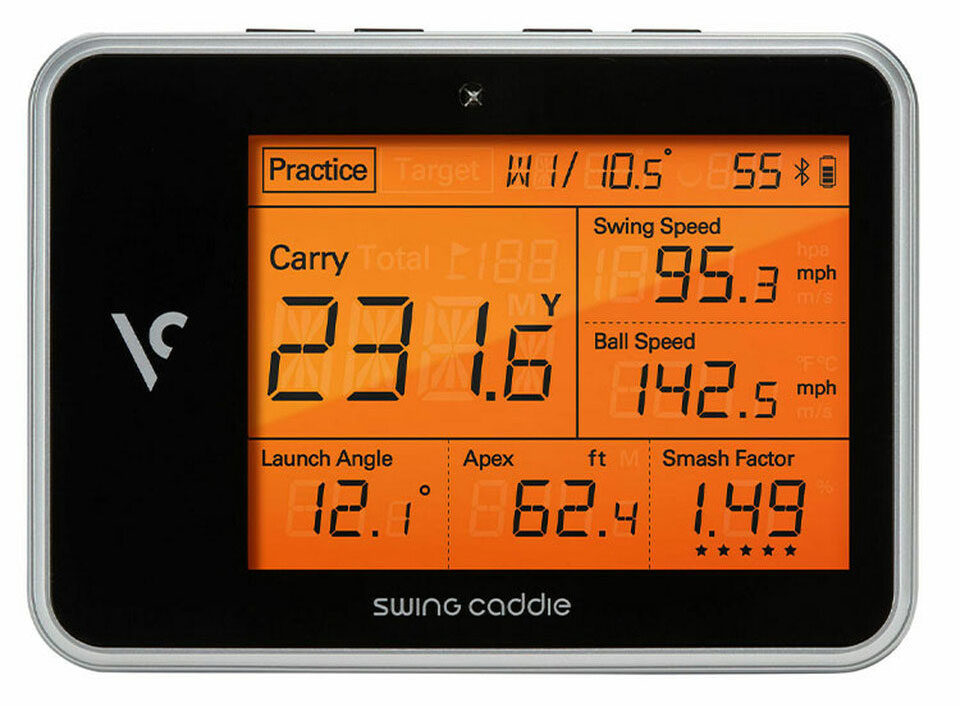 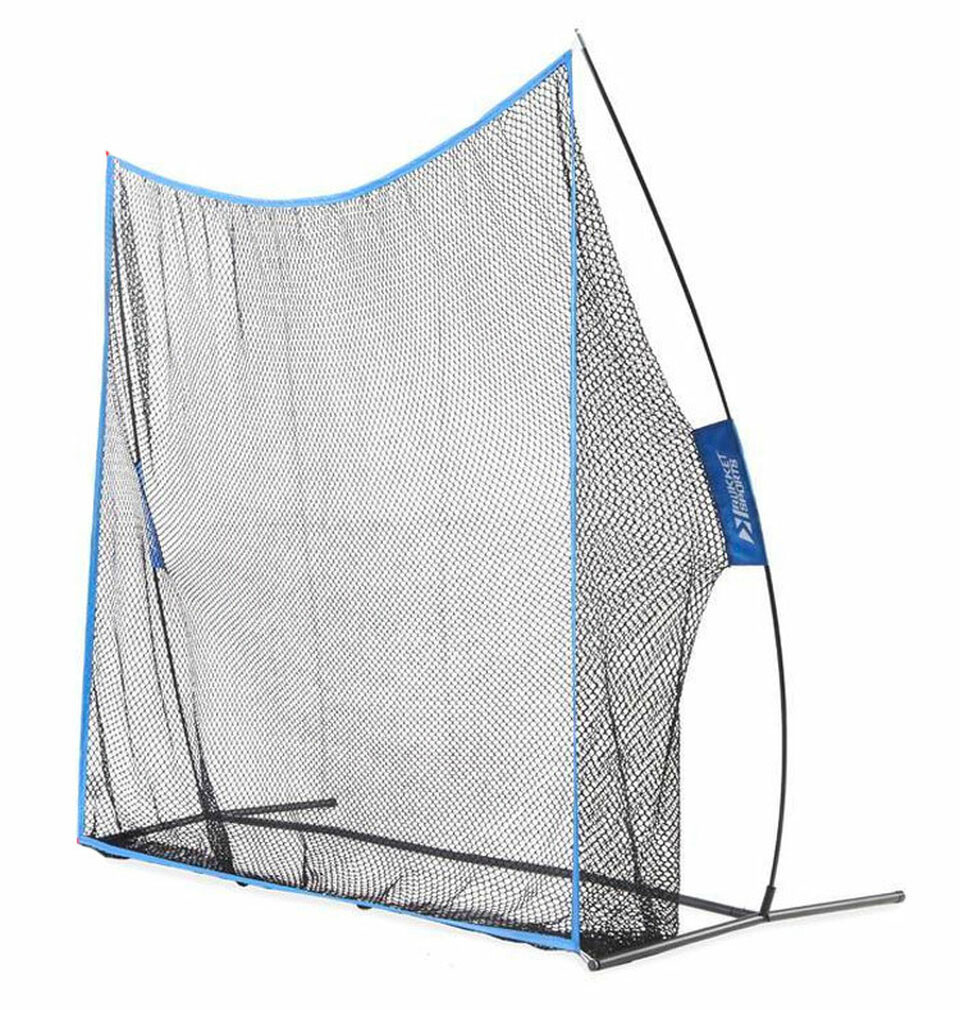 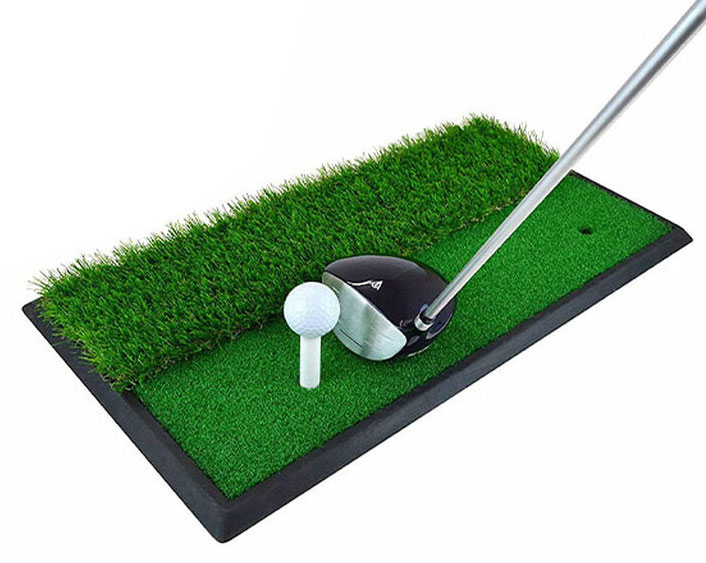 If the vision for your at-home practice facility includes an indoor launch monitor, the above setup is an excellent and cost-effective option.

The Voice Caddie SC300 launch monitor is powered by Doppler radar technology and comes with a remote, to switch between modes and clubs without disturbing the device or your concentration.

The tablet-sized device displays projections of your shot’s carry distance and total distance, as well as ball speed, swing speed, launch angle, apex and smash factor on its screen, with spin rate also able to be viewed via the device’s mobile app.

The Voice Caddie SC300 can also be configured to audibly convey the feedback following every shot, which means you don’t have to keep turning around to see the screen.

Practice mode will provide an accurate overview of the average distance of each club in your bag, while Target mode can fine tune your iron control, with the target distance able to be set in increments.

You can also save session data on the SC300 app, which provides an archive of your practice stints to help identify areas of improvement.

The SC300 launch monitor’s radar tracks the ball’s first few metres of flight, so it needs to be set up 1.5m behind the ball, with at least 2m of space between the ball and net so the radar can pick up the ball flight.

It will form the basis of a very solid at-home set-up, especially combined with a PGA Tour Launch Pad Pro 2-in-1 driving mat, which offers real turf feel from out of the fairway or rough, and the Rukket Haack Lite hitting net. 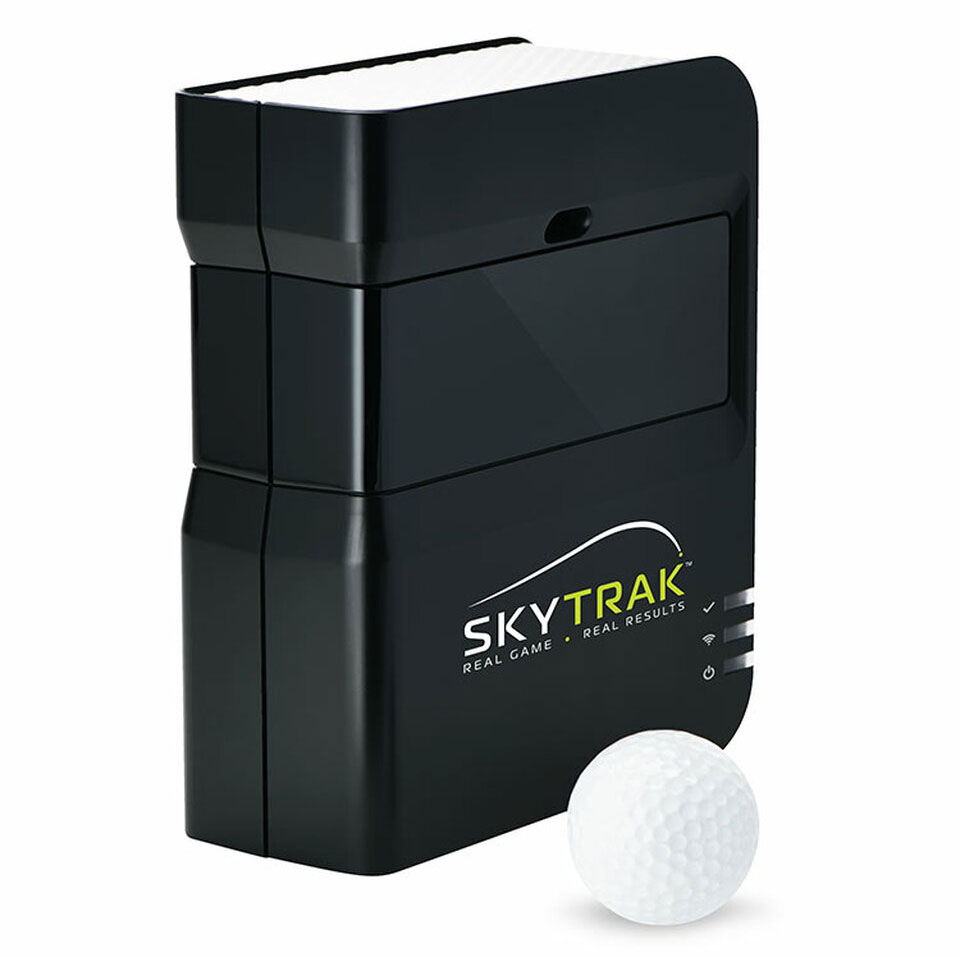 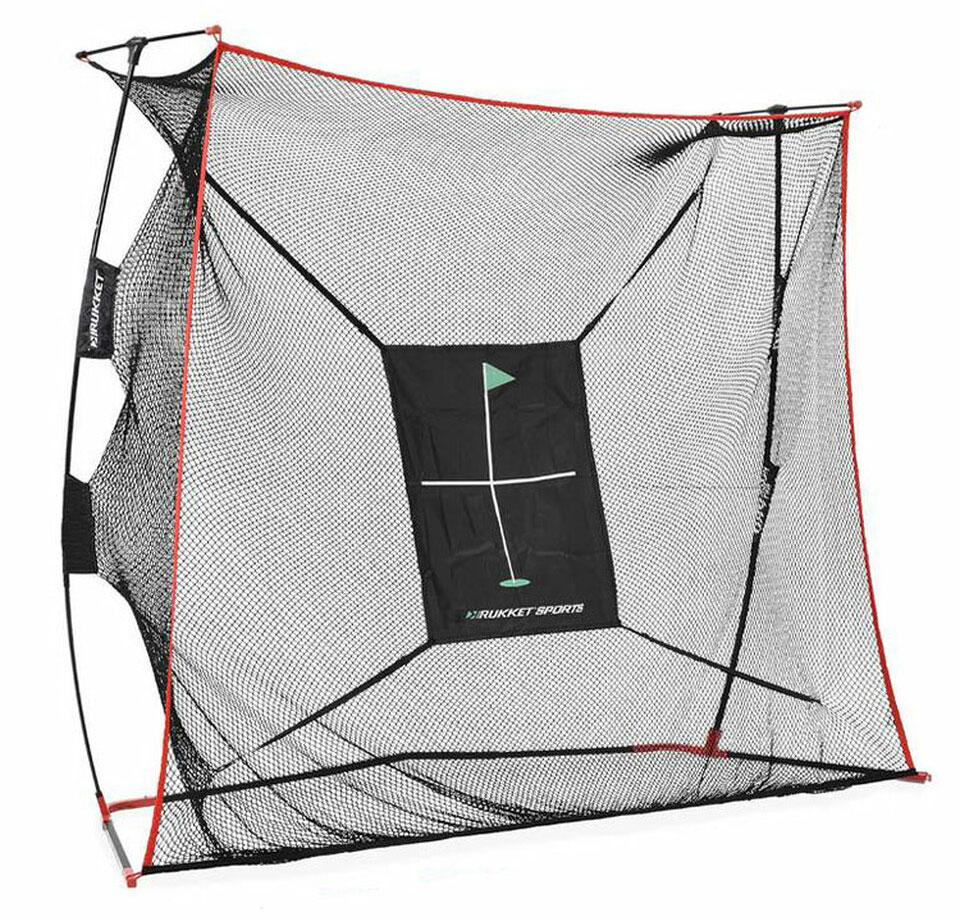 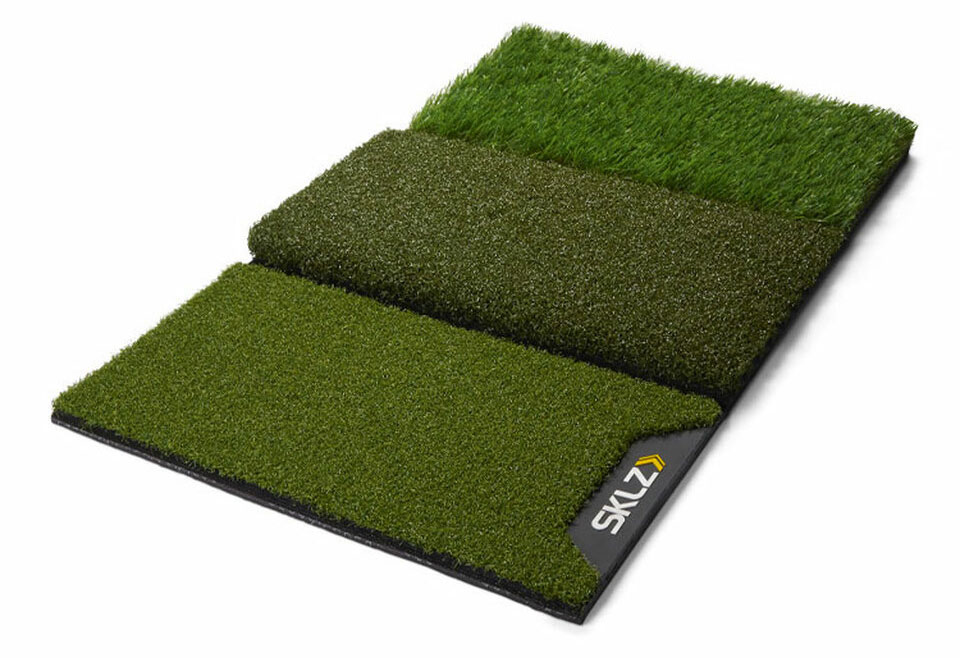 The SkyTrak is one of the leading launch monitors on the market and has a reputation for generating accurate results equivalent to the more expensive professional-grade launch monitors.

It uses a high-speed camera, rather than radar, to capture images of the ball’s behaviour in the first few feet of its flight and as such, it takes up minimal space (it needs to be positioned on the outside of the clubhead, just ahead of the ball). However, to accommodate both left and right handers it will needs to be repositioned to the opposite side.

The SkyTrak provides almost instantaneous feedback on variables such as ball speed, launch angle, back spin, side spin and spin axis, which are displayed via the SkyTrak app on a remotely connected device.

While it doesn’t track what’s also happening with the club like the high-end monitors do - with club path angle and angle of attack measurements - SkyTrak does include an estimate of club head speed determined from the ball speed analysis.

The basic package, which is included in the purchase price, offers a virtual driving range but there are two additional subscription levels that offer deeper access and analysis through the app’s features – such as bag mapping and distance stats - as well as the opportunity to play the world’s best courses.

Throw in the spacious surrounds of the SKLZ Pure Practice Hitting Mat and the Rukket Haack Pro Golf hitting net and you’ve got an accurate and realistic launch monitor that will improve your game and make you the envy of your golfing colleagues.

With more than half of all strokes occurring on or around the greens in a round for the average golfer, incorporating a short game facility into your home setup will fast track your development.

Here’s how to do it:

The compact PuttOUT Slim putting mat might be a space saver but it’s the perfect tool to hone your tempo on those crucial putts inside six feet.

The mat runs at 10 on the stimpmeter so you’ll be honing your speed control like a pro.

To sharpen up your chipping skills around the green, the Stonehaven Short Game set will have you grinning out on the greens.

A 60 x 30cm hitting mat replicates the feel of the tightly mown stuff around the apron and with the triple target net and a trio of foam practice balls, it’ll make those testing chip-and-runs a relatively simple proposition. 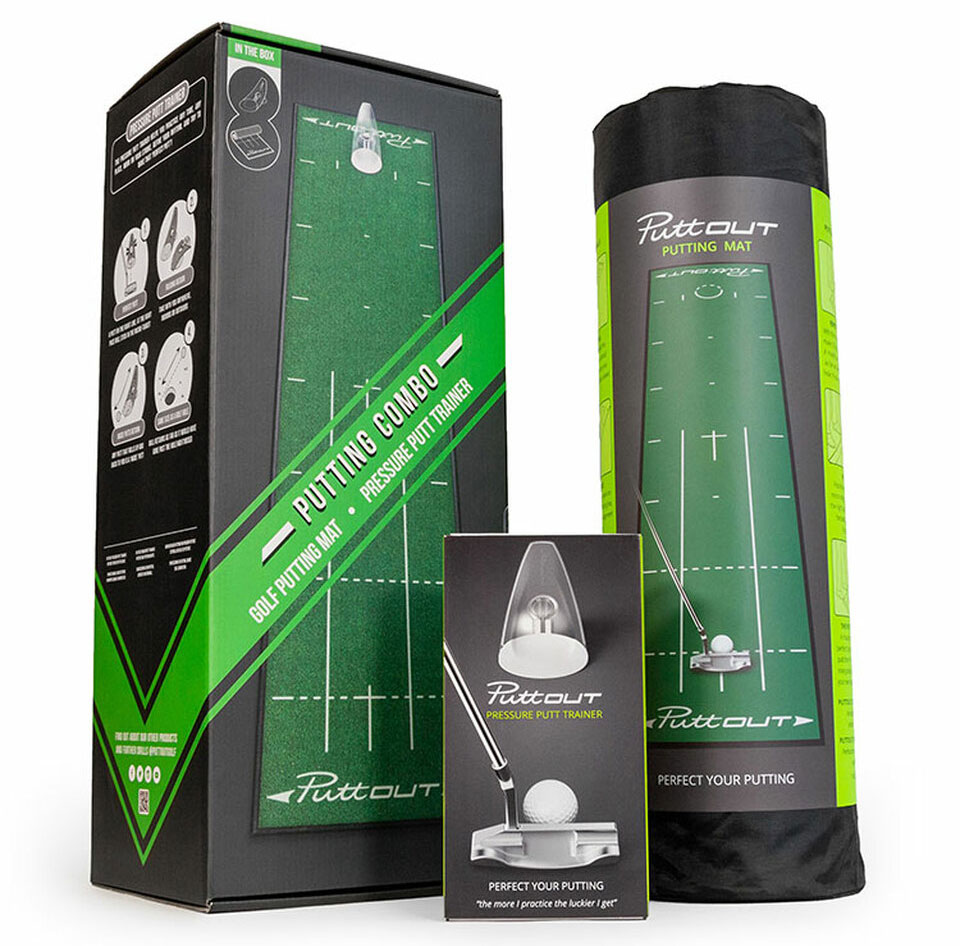 One of the leading training aids available, the PuttOUT bundle will hone both accuracy and distance control.

With a huge putting mat to practice multiple distances, the addition of the PuttOUT Pressure Putt trainer makes it the perfect partner to take dead aim with the flat stick: only perfect pace will find the Pressure Putt’s elusive micro target.

It’s a bundle of joy that’ll soon have you on the path to success on the greens.

When a practice aid is called Hole More Putts, admittedly the bar is set fairly high.

But the tablet-sized technological training aid more than delivers on the expectation that more putts will indeed be holed.

It’s like a launch monitor for putting and it offers a comprehensive overview of your putting stroke via an infra-red motion tracking sensor.

Five key measurements - face angle, impact point, path, speed at impact and angle of attack - are shown instantly on the unit’s display after your putt.

The device can also be linked to the Hole More Putts app on a mobile device, which then generates a visual representation of the movement of your putter throughout the course of your stroke.

After five putts the app crunches the data to spit out what’s known as a putting index score: a weighted average of the five key measurements.

It can be used to identify where improvement is needed, and drills are recommended (via the training videos on the Hole More Putts website) to rectify your faults promptly.

Hole More Putts only tracks what the putter is doing throughout a stroke, not the ball, but it will soon have you doing what its name suggests. 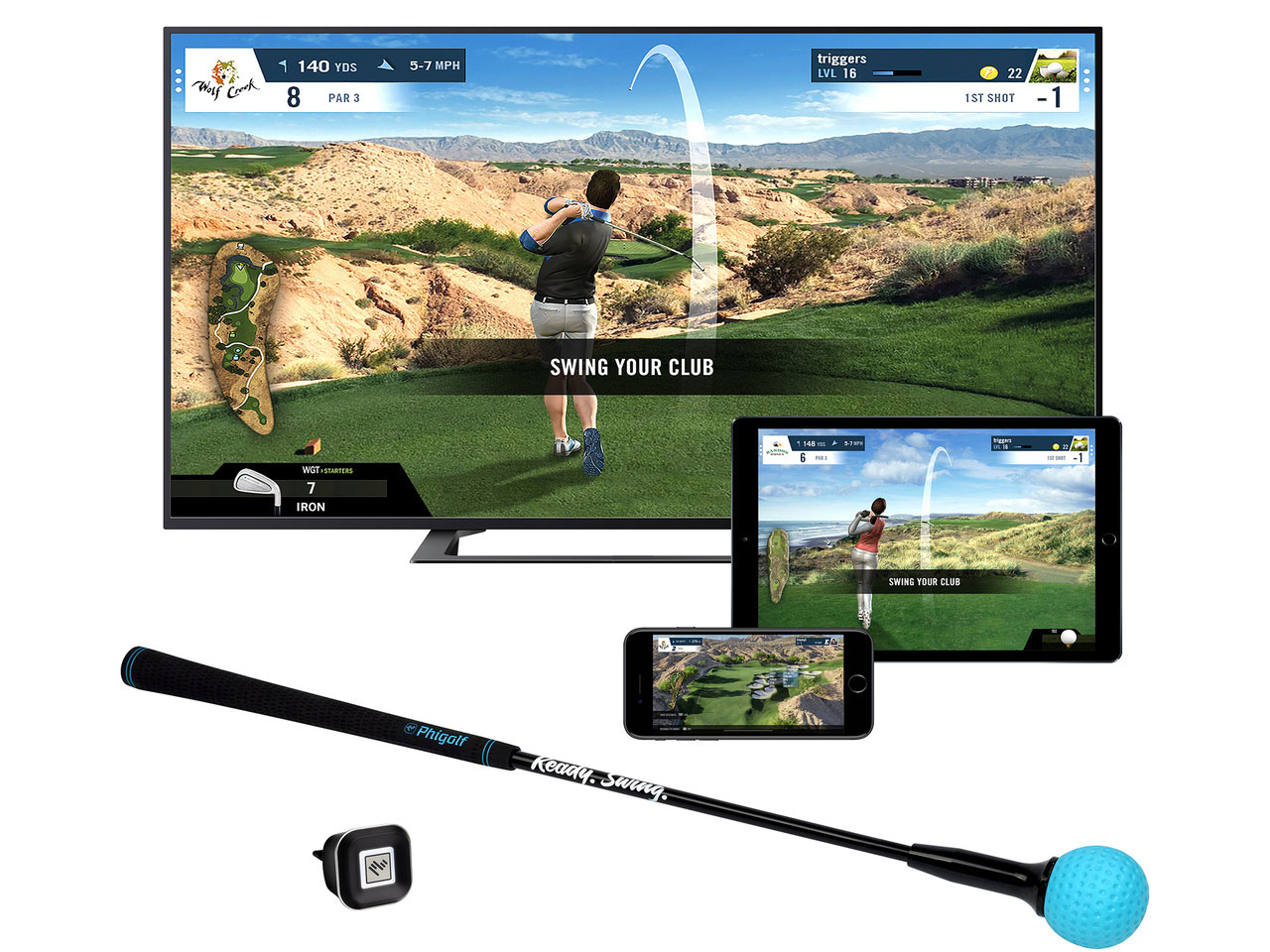 If you’re just not a huge range rat and prefer getting out and about on the course for your practice, don’t worry because there’s still an at-home option to suit.

The PhiGolf WGT edition simulator features real life courses that you can play from the comfort of your living room.

The simulator comes with a short PhiGolf swing stick that contains a 3D sensor that faithfully recreates your swing on screen.

Or for an even more realistic option, you can attach the included club sensor to your driver, fairways or irons and start swinging away at courses such as Pebble Beach and Bethpage Black.

The PhiGolf WGT simulator connects to the WGT app on your mobile device, which can be mirrored to a bigger screen.

THE FINAL WORD ON SIMULATORS/LAUNCH MONITORS

If you’re not entirely sure what a  golf launch monitor does and how a golf simulator completes the picture, here’s a quick technology-inspired interlude before you decide what you require in your home studio.

Firstly, launch monitors are devices that use either radar or a high-speed camera to analyse the action.

Some launch monitors will track both the ball and the club head while they’re in motion, but there is a big range of performance out there.

For the purposes of our home golf studio, we’ve narrow down out launch monitor search in this info to ones that work well indoors.

A launch monitor is linked to a device - be it a phone, tablet, laptop – and the stream of data the monitor captures, such as club head speed, ball speed and spin generates a graphical representation of the ball flight on the screen.

And here’s where the simulator - essentially a piece of software that is compatible with the launch monitor - comes into the picture.

Some simulators can process the data from the launch monitor and replicate it on a virtual golf course, while others need their own sensor to be positioned on a club.

Whichever simulator you go for, you’ll be driving, chipping, and putting on many of the world’s most famous layouts, although it may involve an upgraded subscription.