Strong and powerful wrists have always been admired in a golf swing, with the well-timed hinging and release of them creating lag and generating power right before impact.

Now consider the possibilities when one of those wrists is adorned with the NEW Shot Scope V3, the game’s leading GPS golf watch and performance tracker.

With super-accurate distance measurements, hands-free data collection, AI statistical analytics and 35,000 pre-loaded course maps, the Shot Scope V3 will make your wrist the most valuable, and enviable, part of your game.

The Shot Scope V3 golf watch is a potent ally out on the fairways, greens or anywhere else you find yourself on the golf course.

The watch displays front, middle and back distances to greens, in metres or yards, as well as carries to bunkers and water hazards. It’s also the only product on the market to use the dual-band GPS Broadcom chip, which makes it accurate to within an astonishing 30cm.

But that’s not even half of the V3’s capabilities.

The V3 is a genuine tour-level data tracker and keeps tabs on over 100 statistics relating to your golf game, all recorded in real-time.

The watch comes with 16 sensors that screw into the grip end of every club in the bag (there are two spares) and after an initial set-up through the Shot Scope app, there is no need to tap or swipe a club before pulling the trigger - the sensors are smart enough to recognise which club you are hitting and its position on the course through the V3’s intuitive Power-Sense strap.

It makes the Shot Scope V3 a completely hands-free performance tracking device, quietly collating data in the background and leaving you free to concentrate on your game. 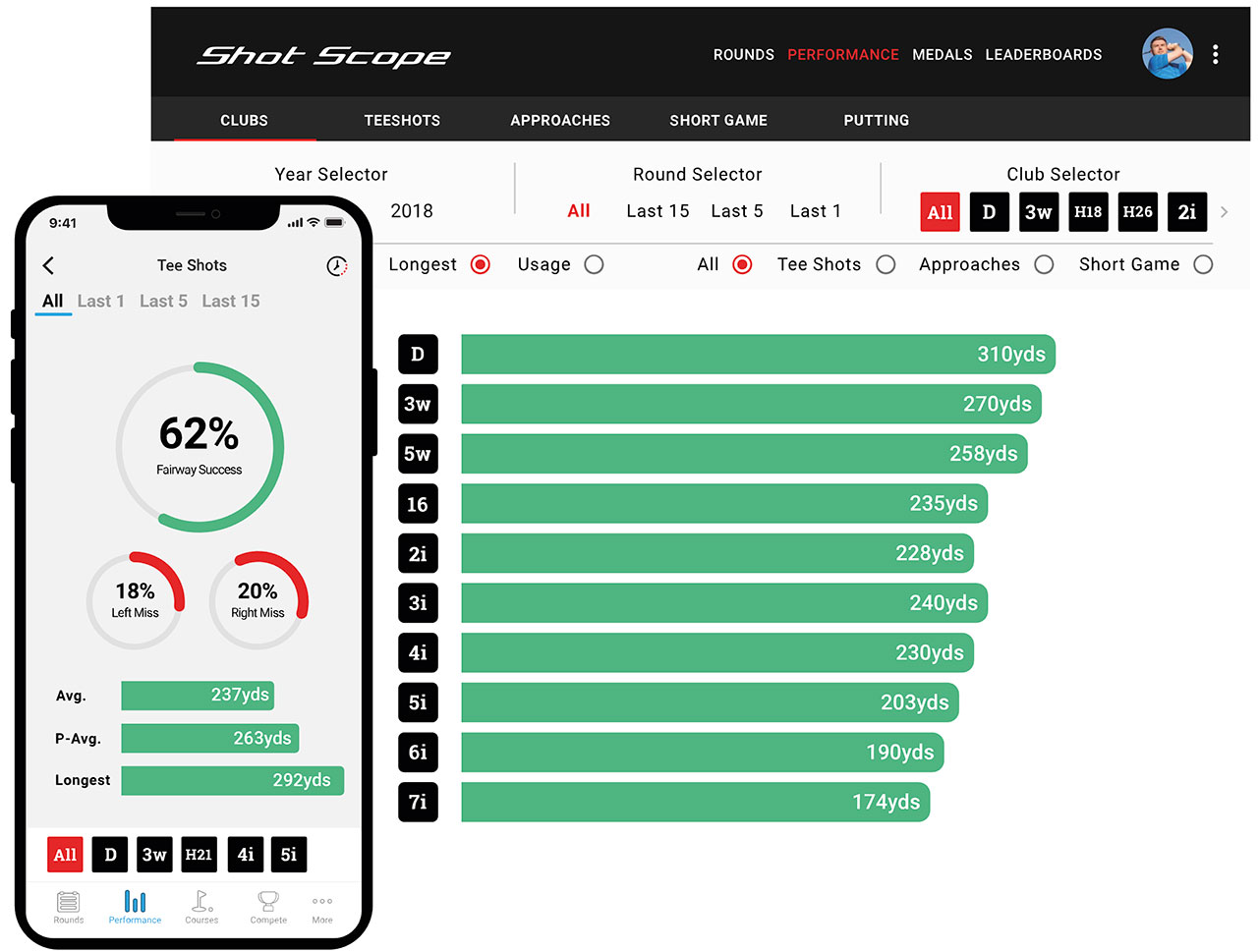 The free Shot Scope smartphone app syncs to the V3 via Bluetooth and offers a graphical overview of your rounds, with every shot charted on a detailed course map (there are 35,000 in the Shot Scope database).

The app’s dashboard provides an in-depth snapshot of your statistics, such as average distances and accuracy for each club, driving distance and miss tendencies, to name but a few of the more than 100 Tour-level stats the V3 compiles.

But it’s the watch’s AI-driven analytics which really demonstrate the enormous power of the V3 as a training aid.

The app details the strong parts of your game, while also offering an opinion on the weaker areas – an often nauseatingly uncomfortable but sobering look at the cold, hard statistics of your shortcomings. But identifying your inadequacies as a golfer will help you improve in those areas which require the most attention.

The app also has an interactive element, with medals unlocked and awarded when pre-set goals are achieved.

Shot Scope have announced on the  27th January 2021 a significant string of upgrades to its performance tracking platform, allowing users to review ‘strokes gained’ data for all facets of their game on the mobile app. 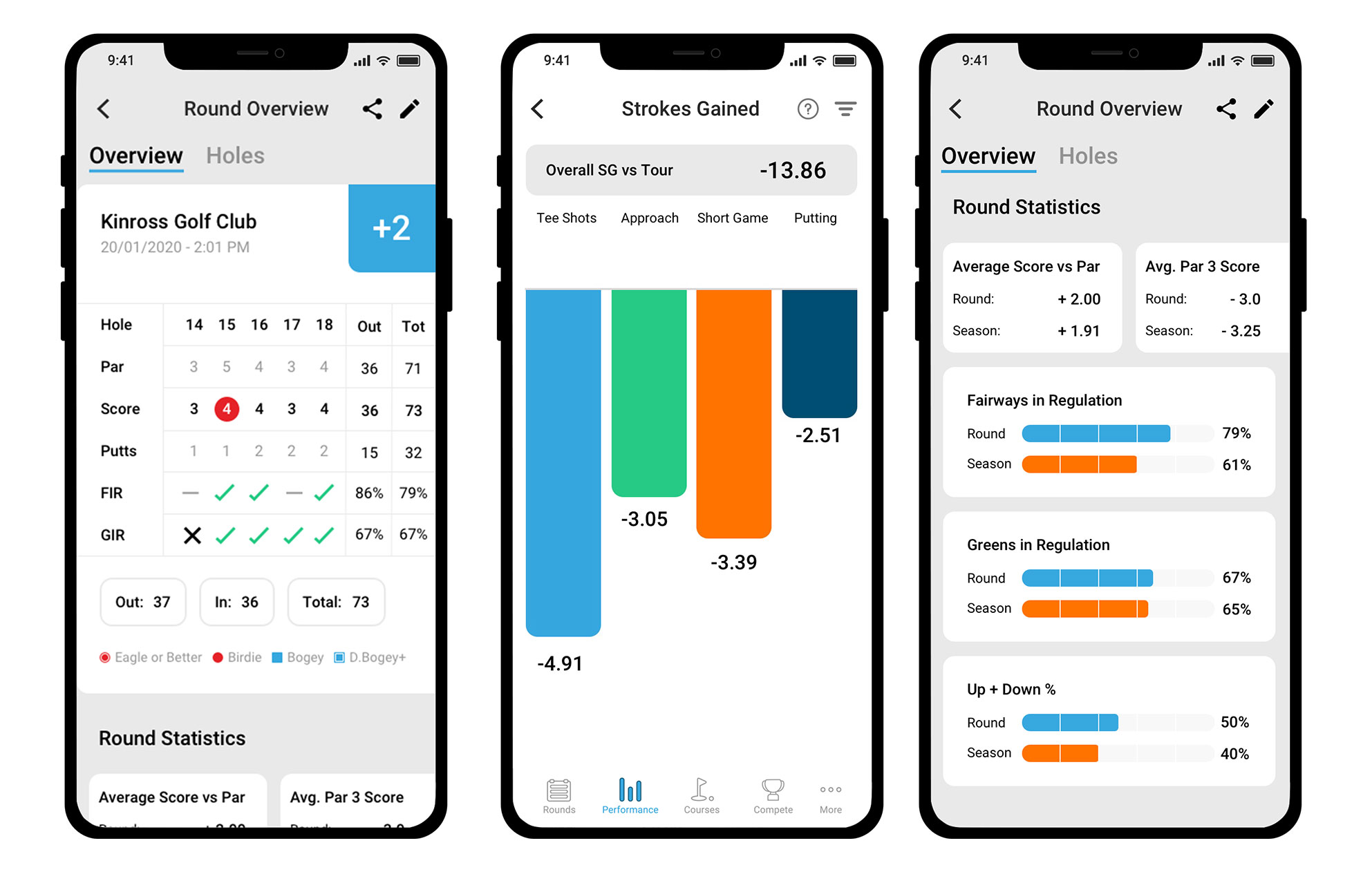 Strokes gained is a way of analysing where a player sits when comparing every aspect of their performance with players in the rest of a dataset. This approach to performance analysis will allow Shot Scope users to gain a greater understanding of which areas of their game they may need to work on in order to improve their overall scoring average. It will do this by isolating individual aspects of a player’s game and comparing it to the entire Shot Scope dataset to deliver efficient results.

The release of strokes gained on Shot Scope’s performance tracking platform forms part of a wider update to the Shot Scope apps, including new performance pages, round overviews and social features.

Strokes gained capabilities will be released gradually onto the Shot Scope platform in three separate phases.

Phase One: Will go live on January 27th and will provide users with strokes gained overview, benchmarking users’ statistics against Tour golfers.

Phase Two: Expected in the spring, will expand on the initial release, with collated information on trends and insights into golfer performance.

Phase Three: Will go live in June 2021 and will allow Shot Scope users to benchmark their performance against golfers of a similar handicap.

Shot Scope’s research suggests most amateur golfers can improve their scores by devoting a greater proportion of practice time to their short game.

And it’s for that very reason the Shot Scope app has a short game-focused section that records flag positions and offers chipping and putting statistics, which are collected through the Shot Scope PinCollect feature.

While it isn’t a fully automated feature like the rest of the V3’s data collection, all you need to do is key in the number of putts you had on each green while next to the hole – just make sure you count them all for a reliable dataset.

And don't forget, it's also a Watch

The Shot Scope V3 is a stylish regular time-keeping piece while off-duty and is also significantly slimmer and lighter (only 41g) than the previous Shot Scope model, the V2.

It features an easy-to-read colour screen, with large digits for GPS distances, and can be used in three different modes: GPS only, GPS and game tracking mode, and Pro mode, which permits data to still be recorded when the GPS function is disabled for tournament play.

The Shot Scope V3 can also sustain up to 10 hours of use per charge in GPS mode and more than 10 days when used as a time-keeper off the course.