It could be due to the “Fred Couples effect” but ever since the laidback, smooth-swinging American played the 2010 Masters at Augusta, golf shoes haven’t quite been the same.

When Couples sauntered onto the first tee sporting a pair of soft-soled spikeless Ecco kicks, he wasn't trying to usher in a golf shoe revolution. It was primarily for comfort's sake, to help alleviate the chronic back problems he has endured throughout his career.

While "Boom Boom" may not have been aware of it at the time, the next generation of golf shoes was on display. And golfers liked what they saw. Golf shoe technology has always grown with the game and although many of the early ideas have gone the way of mashies, niblicks and featheries, many elements are still found in today’s modern golf shoes.

The History Of The Golf Shoe

The golf shoe revolution began back in the mid-1800s, when Scottish golfers began hammering nails into the leather soles of their boots to improve traction on the undoubtedly damp and slippery links turf. However, the amateur spike fitting had its drawbacks.

The nails often worked loose from the sole and sent the spike upwards into the foot with painful consequences, giving new meaning to the golfing phrase "I nailed that one".

Fortunately, a solution was found. In 1891 metal spikes that screwed directly into the soles were introduced to save golfers’ feet from a possible skewering.

It wasn’t long until the immortal Saddle Oxford shoes were introduced in 1906, paving the way for golf’s unique and distinctive style to come to the fore.

The iconic two-toned leather shoes, with a dark colour band flowing around the centre of the shoe, were initially aimed at racquet sports such as tennis and badminton.

While they didn’t gain widespread acceptance with those sports, they soon found a welcome home on the feet of golfers. And in a measure of their longevity and eternal bond to golf, some current golf shoes still sport the distinctive Saddle Oxford stylings.

Saddle Oxfords became a cultural phenomenon off the course in the 1950s, with the shoe popular among both men and women, and teenagers in particular – echoing the off-course popularity of today’s hybrid golf shoes.

The Saddle Oxford retained popularity in the 1960s and forever became synonymous with golfing fashion when top professionals such as Doug Sanders and Tom Weiskopf paired brightly coloured variations of the shoes with outrageous trouser and shirt combinations.

The 1960s also saw the introduction of a popular new type of golf shoe spike. Metal sockets with an internal thread were crafted into the soles of golf shoes and replaceable metal spikes were then fastened into the socket. The process of replacing spikes became a great deal easier and hard wearing Tungsten-tipped spikes were introduced in the 1970s.

Once the 1980s rolled around, the focus switched to making a more athletic and flexible type of golf shoe. Golf shoe designers started to mould their designs around the foot, instead of the golfer’s foot eventually moulding to the shoes, as was previously the case.

Golf shoes in the 80s were still fitted with metal spikes, but concern at the damage they were inflicting on greens prompted the winds of change.

Metal spikes were on the way out and in the late 90s, soft plastic spikes became the default choice on golf shoes after most courses outlawed the metal monsters. As a consequence, the familiar clickety-clack sound of metal spikes pounding the pavement was committed to the archives of history.

All these innovations have, in some way, led to the latest trend in golf shoes: the Fred Couples-inspired hybrid golf shoe.

The Journey to the Spikeless Golf Shoe

While the revolution took a little while to gain momentum since 2010, the last three or four years has seen an explosion in popularity of the cross-over golf shoes pioneered by leading shoe brands such as Ecco, Adidas, Puma and Skechers.

But possibly the biggest tick of approval from golfers is their untraditional style that exudes street-cred, with youthful looks that are not dissimilar to those shoes that are normally kick-flipping skateboards. In fact, many non-golfers are buying hybrid golf shoes solely on the fact they look cool.

However, it’s not all style over substance.

There’s some serious technology under the skin of hybrid golf shoes, gleaned by the experienced manufacturers after years of research and development producing running, walking and casual shoes.

All this know-how has contributed greatly to the on-course comfort of hybrid golf shoes and for a casual golfer who plays about once a month, hybrids are a no-brainer.

Rather than forking out large amounts of dough on soft-spiked golf shoes that will see approximately 60 hours of action a year, hybrid golf shoes can go incognito at work, out shopping, walking the dog, or sipping a long mac, double shot, topped up, skim-soy-almond milk, with hot water on the side, at the café.

Hybrids effectively give golfers an extremely versatile second pair of shoes and there’s even no need to change shoes before or after a round; spikeless hybrids are easy to drive in and are welcome in the clubhouse for post round functions.

With most casual golfers being of the “fair weather” variety, the traction levels in the dry achieved by hybrids are comparable to soft-spiked golf shoes.

While Ecco, Adidas, Puma and Skechers initially produced just hybrid golf shoes, they have branched into soft spiked shoes that utilise the same athletic-inspired technology as their hybrid counterparts.

Since crossing over into the golf shoe market, premium shoe maker Ecco has developed its own dedicated research and development program focused solely on golf footwear, with their most recent creation the Ecco Biom Hybrid 2 golf shoe.

The Ecco Biom Hybrid 2 features a lightweight and flexible sole, shock absorption technology and a patented bonding method for a water-tight seal between its leather upper and polyurethane midsole. It also features Ecco's E-DTS sole, which has 100 moulded contact points and 800 traction angles for excellent grip, as opposed to 9-11 soft spikes on each golf shoe.

With TPU (thermoplastic polyurethane) soles, the Ecco Biom Hybrid 2 golf shoe is wear-resistant, durable and is designed to last. When compared to the frequency golfers replace their soft spikes (which is almost never, in most instances), the Ecco E-DTS sole will provide stable, even and reliable grip throughout the shoe’s lifetime.

And when top players such as Ernie Els, Matt Kuchar, Justin Rose and Rickie Fowler choose to wear hybrids on the PGA and European Tours, it should inspire confidence in the grip level that hybrids can provide.

Ecco have based their hybrid golf shoe concepts around waterproof leather, in particular Yak leather for its strength, soft feel, breathability and resistance to marking. Ecco claim Yak leather is three-times stronger than standard cow hide, allowing thinner cuts and a reduction in overall weight and the leather is treated with Hydromax technology to make it highly water resistant.

Other hybrids in the Ecco range are the athletic Ecco Cage Pro and the loafer-like Ecco Casual Hybrid, which wouldn't look out of place on a yacht in the Mediterranean.

Footwear giant Adidas boast the Adidas Adicross V golf shoe and it is their most sought after hybrid model. It is based on the classic Adidas Samoa/Samba street sneakers but has a sole loaded with 72 optimally-placed lugs for grip on the greens while still being wearable anywhere. The Adidas Adicross V golf shoe has a water resistant leather and suede upper and a “cloudfoam sockliner” to provide extra cushioning and comfort.

Adidas also make the Adidas Adipower S Boost hybrid golf shoe, which is reminiscent of their famed running shoes, while the Adidas Adicross Gripmore 2 is more of a skate-style golf shoe.

The Puma Titan Tour Ignite, while not a true soft-soled hybrid, being only fitted with soft spikes, is an ankle-supporting, high-top golf shoe. The Titan Tour Ignite model undoubtedly takes its inspiration from basketball and taps into Puma’s experience in making boots for hoops.

As hybrids continue to gain traction (no pun intended) in the golf shoe market, it may be a case of soft-spikes being eventually phased out altogether, mirroring the demise of metal spiked golf shoes.

If only there was a hybrid golf shoe that makes a clickety clack sound on pavement. Now that would be a top seller... 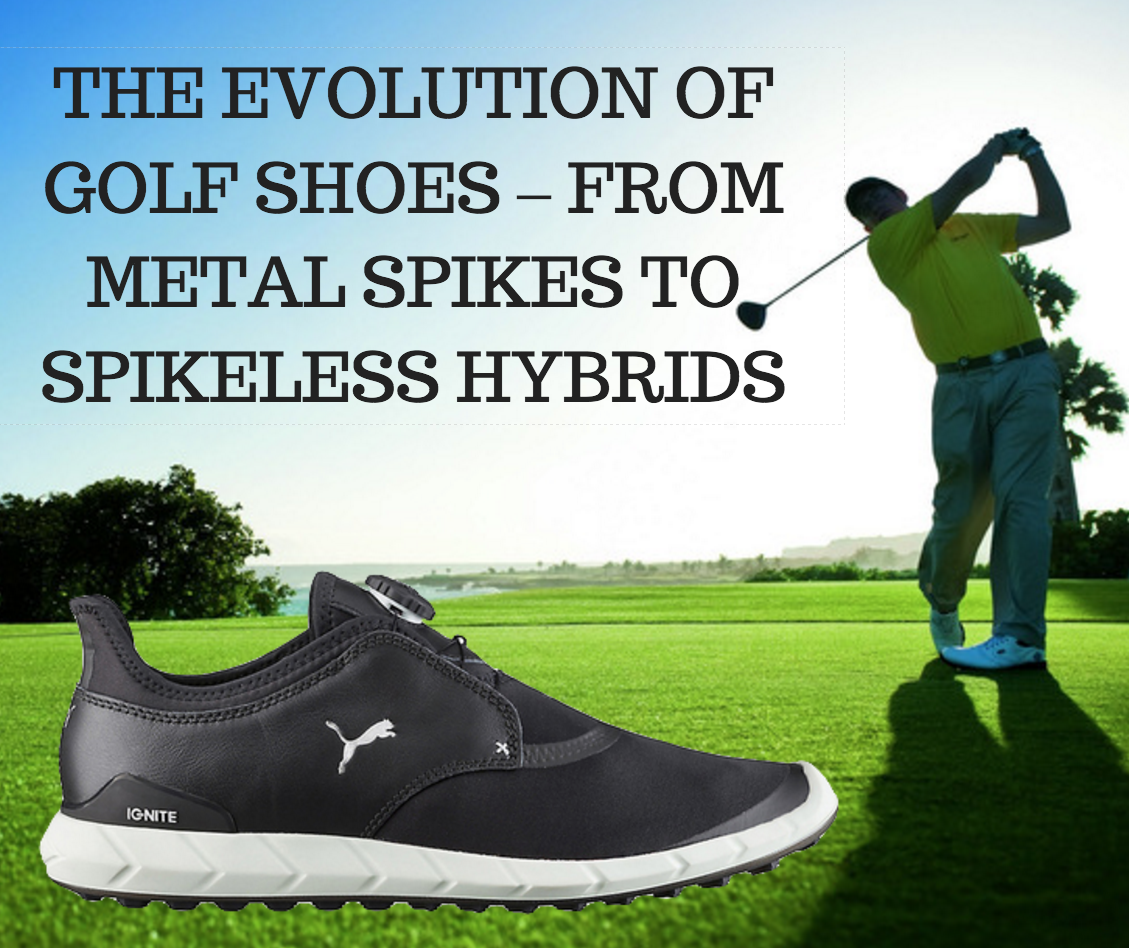