MASTERS UPDATE 11/04/2022: Even a four-putt on the last hole couldn’t deny Scottie Scheffler his first green jacket at the Masters in 2022. Scheffler made a double bogey on the 72nd hole but his 10-under total saw him win by three shots from Rory McIlroy, who stormed home with an eight-under 64 in the final round.

The world No.1 held the lead for much of the tournament and withstood an early charge by Aussie Cameron Smith, who narrowed Scheffler’s lead to just one stroke after two holes. However, Smith made a triple bogey at the tricky 12th hole to drop out of contention, eventually finishing equal third with Ireland’s Shane Lowry. 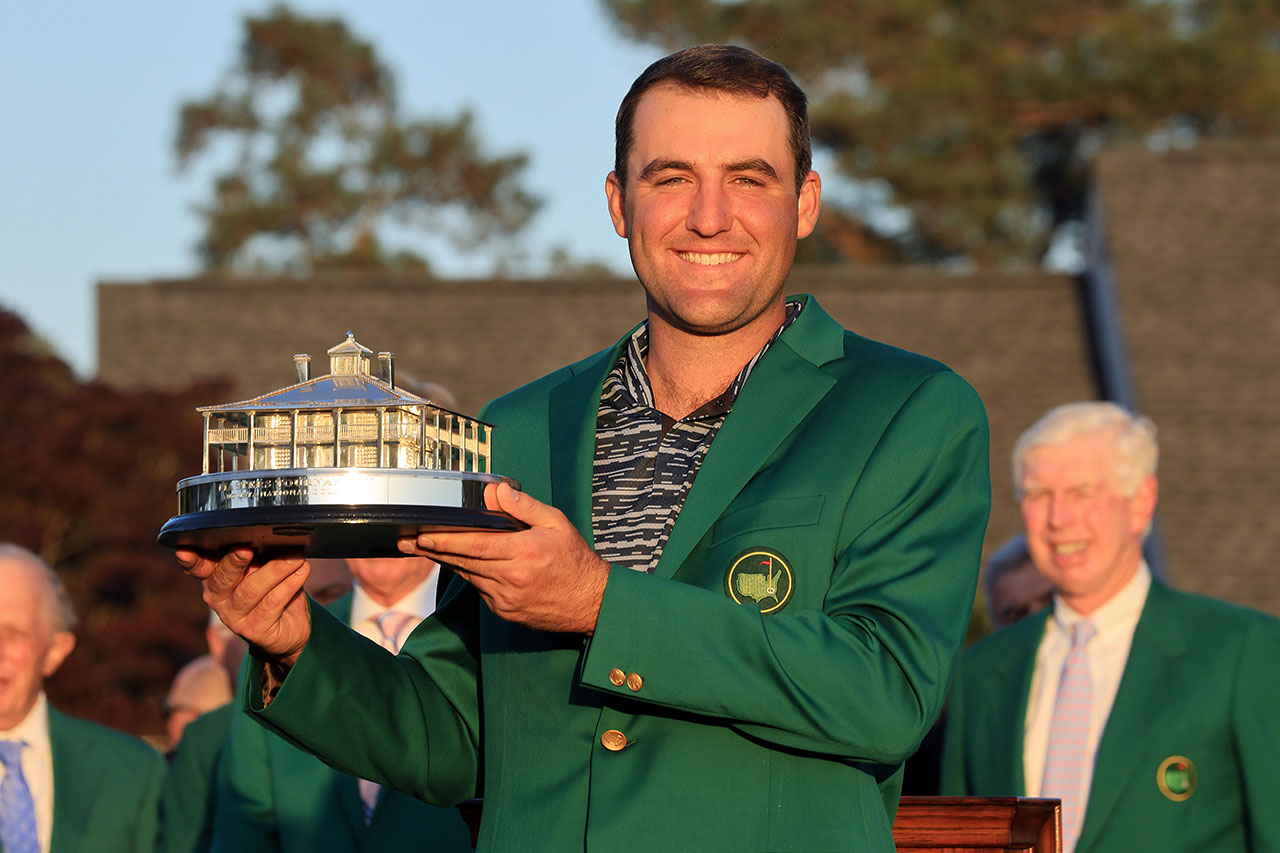 It’s Masters time again, the tournament that heralds the unofficial start of spring in the US and the beginning of the majors for golf fans around the world.

Read on and find out why the long, flowing locks of a celebrated mullet may be fanning freely against the collar of the green jacket at the end of this year’s tournament.

The best mullet in the game has seen some furious action of late, with its owner, Queensland larrikin Cam Smith, holding firm to win a wet and wild Player’s Championship. It was the kind of victory that has stamped Smith as a real threat this year at the Masters, with his putting simply unbelievable and a chipping and wedge game without peer.

After finishing second to Dustin Johnson in 2020, when he shot a score that would’ve won every other Masters, Cam clearly has the game to tame Augusta. Laidback off the course but incredibly focused and determined when inside the ropes, he’s the kind of golfer who would be a popular winner. If he does break through, the champions dinner in 2023 will be one to remember – steak on the barbie, meat pies and frothies, anyone?

Players who win the Masters probably expect it to be life changing to a degree. But when Hideki Matsuyama won the Masters last year, golf-mad Japan went absolutely berzerk. A third-round blitz by Hideki set up his famous victory, offsetting his nervy back nine on Sunday while under the gun. It delivered Matsuyama the green jacket and he became the first Japanese male to win a major. Can he back it up at this year’s Masters?

He pulled out of the Player’s Championship a couple of weeks ago with a back injury, which is never a good sign, but he did win Sony Open in Hawaii in January. If the back has responded to treatment and the form holds up, expect Hideki to stick his nose in the frame at some point this year.

The feeling of being the No.1 player in the world at the Masters is probably only bettered by winning the green jacket itself. But for American Scottie Scheffler, that green jacket dream could be the ideal follow up to his past few months of dazzling golf. In just his third year on PGA tour, Scheffler’s form has simply been irresistible. He starred at the Ryder Cup last year but has shifted up a gear in 2022, finally breaking through for his first victory after 70 starts at the Phoenix Open in February. But he did what few players can by following up with wins at the Arnold Palmer Invitational at Bay Hill and the WGC Match Play in Austin.

Our man Scottie has now won three times in his last five starts and, in doing so, replaced Jon Rahm at the top of the rankings. While he might not be the big name on everyone’s lips at this year’s Masters, his recent consistency will be a valued commodity at Augusta. The last player to win the Masters as world No.1 was Dustin Johnson in 2020. Could Scottie be the next?

Three-time Masters champ Phil Mickelson won’t be playing at Augusta this year, a self-imposed no-show after he made some candid, and scandalous, comments about the proposed Saudi Golf League and its impact on the PGA Tour. It wouldn’t be too much of a stretch to suggest some of the green jacket types at Augusta quietly discouraged him from returning at the Masters, a tournament that prides itself on respecting the game and conforming to an ideal. Phil’s absence robs the Masters field of a current major champion too, with Lefty winning the US PGA Championship as a 50-year-old last year.

Tiger is also not expected to tee it up this year as he continues to recover from shocking injuries sustained in a car crash over a year ago. Tiger hasn’t officially withdrawn from the tournament as yet (a little over a week out) but it’s par for the course - the five-time Masters champion left it until the very last minute in 2014 and 2016 before officially withdrawing. However, if he happens to tee it up, look out because nothing captures the imagination like a Tiger comeback at the Masters. Whatever happens let’s hope that next year Tiger and Phil, supreme champions of their generation, are both back in the fold.

The Australian assault on the Masters will be six-strong this year and three of them will be making their debuts: Min Woo Lee, Lucas Herbert and Cam Davis. The young guns (Lee is 23, Herbert, 26, and Davis, 27) all travelled early to Augusta to play a few practice rounds in a bid to get the sheer excitement of seeing the place in person out of their system.

They also raided the gift shop for Masters merch but it should mean that come Thursday, it’s all business. While the last rookie to win on debut was Fuzzy Zoeller in 1979, Will Zalatoris nearly did it last year when he finished runner-up to Hideki Matsuyama. While this year will be the trio’s first Masters, it almost certainly won’t be their last.

Last year, a limited number of fans were allowed back to Augusta, after the solitude of the near-empty 2020 Masters played in November. This year, however, it seems everything is returning to pre-pandemic, circa 2019, normal; in other words, the fans, and their echoing roars, are back in full capacity. And when the fans are back, the electrifying atmosphere and heightened pressure will also be in abundance. Expect to see Amen Corner rocking this year, particularly at its knee-knocking 12 th hole. And there’s nothing like the buzz of the crowd at the par 3 16th on Sunday, with its ace-induing pin position. When the fans are back, the best players often respond in kind.

Of all the interesting rules and regulations at Augusta National, of which there are many, one has particularly peculiar consequence. Running and jogging is a no-no across the entire Augusta National property, with fans having to employ an awkward walking-but-not-running style of conveyance when the gates open at the start of each day of the tournament. The rush to get the best vantage points, which can’t really be a rush, is a priority for many fans. Why? Because as soon as a chair is unfolded and plonked down, fans can come and go as they please, safe in the knowledge their spot will be there for them when, and if, they choose to return.

Not everyone is going to win a green jacket in their career. But for Xander Schauffele and Rory McIlroy the scar tissue keeps building. Olympic gold medalist Schauffele came oh-so-close last year, applying pressure to Hideki Matsuyama late in the final round before it all unraveled in a disaster at the par 3 16 th hole. Four straight birdies put Xander two shots back with three holes to play, but a chunked nine iron was wet as soon as it left the face, falling well short into the pond at the front of the green and leading to a triple bogey.

It was the kind of crushing moment Rory McIlroy has become accustomed to at Augusta. McIlroy is simply unstoppable when he’s in full flight but, sadly for him, he almost never brings it on Thursday at Augusta. Needing to win the Masters to complete the grand slam of majors, slow starts have been killing Rory in recent years. And when he has been a contender in the final round, his A-game has gone AWOL. In the grand scheme of things, no-one would surely begrudge Rory or Xander an overdue win if they have get a sniff late on Sunday.

It’s the Masters tradition that reveals a lot about a player and this year Hideki Matsuyama is that player. As the previous year’s Masters champion, Hideki has been tasked with creating the menu for the yearly catch-up of Masters champions on the Tuesday of the Masters, otherwise known as the Champion’s Dinner. Hideki has been coy on what will feature on his menu – in fact, he admitted he hadn’t really prepared much for his night of nights. But going on past menus, homeland cuisine appears to be the go.

South African Charl Schwartzel stuck with what he knew in 2012 when serving a sausage called a boerewors, while Adam Scott went all-Aussie in 2014 with Moreton Bay bugs and pavlova. And back in 1989 Sandy Lyle, against probably the wishes of everyone in attendance, served up a shocker - haggis from his native Scotland.

On that speculative basis, you’d think Japanese cuisine will feature: sushi and sashimi, possibly even the teppanyaki plate will be fired up with some Wagyu beef. One thing’s for sure, come Wednesday Hideki’s menu will become part of history.

As players hit the ball further, Augusta is one of the few clubs in the world with the resources to combat length. To that end, this year’s Masters sees significant revisions of the 11 th and 15th holes, which have been lengthened and remodelled. The 11th, one of the hardest holes on the course with a pond protecting the green, has had its tee moved back 15 yards and shifted to the left. And its fairway contour has also been altered and several trees removed from down the right-hand side. Rory McIlroy was one player who didn’t think it would be a big deal, with the world No.9 saying the drive and second shot would be easier but the remodelling beside the green would make it much trickier when players bailed out right.

Meanwhile, the 15th, one of the signature par fives at Augusta that has been one of the easiest holes in recent years, has also had some extensive work completed. Players routinely bombed their drives to set up a short iron into the sloping back-to-front green, but 20 yards has been added to the hole and the fairway remodelled to make it a much tougher test. The 18th hole has also had length added, with 13 yards of extra teeing ground if, and when, required.

World No.1 ranked amateur Keita Nakajima earned his Masters start after winning the Asia Pacific Amateur in Dubai last November. It was a compelling performance and with his flowing swing, Nakajima looks almost a lock for low amateur honours. Last year was an Augusta dream for Japan, with Hideki Matsuyama claiming the green jacket a week after 17-year-old Tsubasa Kajitani won the Augusta National Women’s Amateur at the course. No amateur has ever won the Masters but Nakajima is set for a good showing.