UPDATE 23/05/2022: American Justin Thomas claimed his second US PGA Championship title after beating Will Zalatoris in a three-hole playoff at Southern Hills. But he had a bit of help from Chile’s Mito Pereira.

Pereira was leading the tournament by a shot with one hole to play but sliced his final tee shot at the 18th into a creek, resulting in a heart-breaking double bogey that saw him finish third alongside Cameron Young. Thomas’ 67 on Sunday was the equal lowest round of the day and his play-off victory was set up with a brilliant 3 wood off the tee at the par 4 17th that found the green.

His resulting two-putt birdie gave him a one-shot margin over Zalatoris and he sealed his second major with a par on the 18th. Chris Kirk, Matt Fitzpatrick and Tommy Fleetwood finished tied for fifth at three-under and two shots outside the playoff, with Rory McIlroy a shot further back in eighth.

The PGA Championship will be played from May 19-22 at Southern Hills Country Club in Tulsa, Oklahoma.

After the Masters kicked off golf’s major season in April, the PGA Championship follows hot on its heels.

Here’s what at play for the second major of the year: 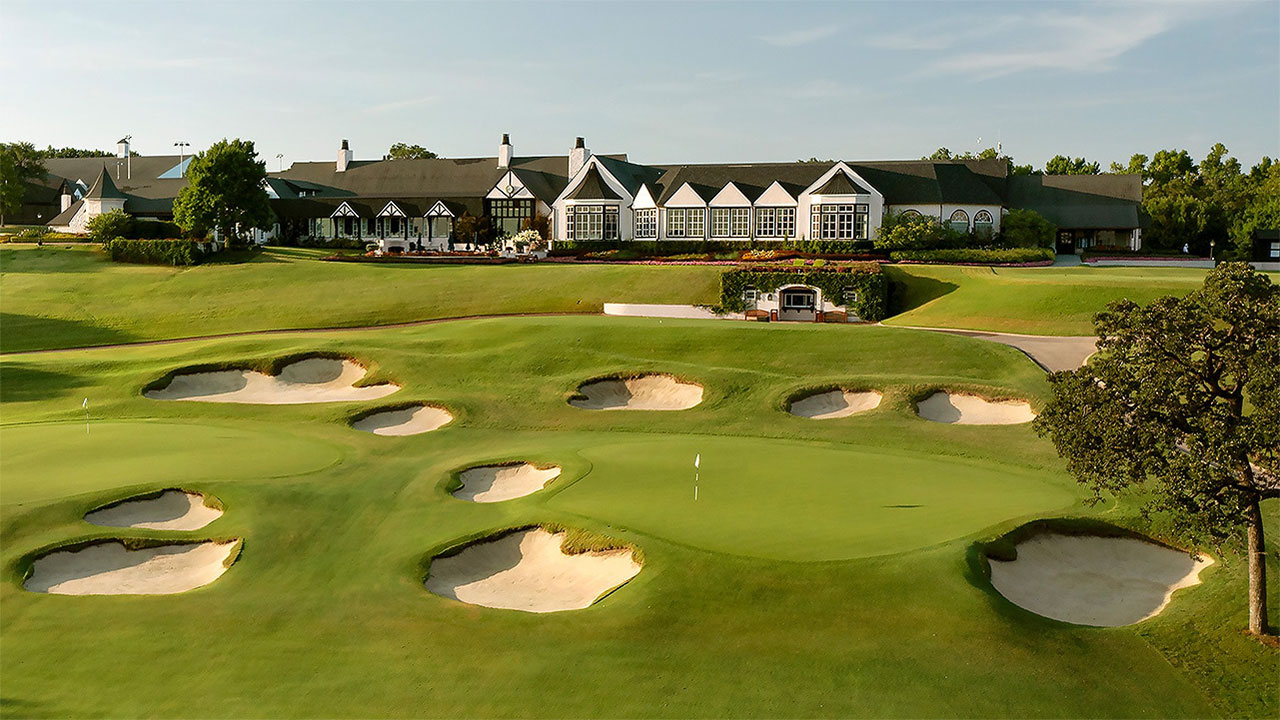 Southern Hills Country Club in Tulsa, Oklahoma, was a late replacement for this year’s PGA Championship (Trump National course in New Jersey was struck off the roster), but it has a long history of hosting the world’s best golfers on the game’s grandest stage.

Architect Gil Hanse completed a renovation of Southern Hills in 2019 that included a widening of fairways, a tree removal program and the restoration of bunkers, all intended to return the course to the original Perry Maxwell design that was completed in 1935 amid the Great Depression.

Southern Hills is known for its famous clock tower and the course hosted the Senior PGA Championship last year, which was won by Germany’s Alex Cejka with an 8-under total.

There was a huge question mark over the legitimacy of Scottie Scheffler’s world No.1 ranking heading into last month’s Masters.

But come Sunday evening, 25-year-old Scheffler had put his detractors in the shade with an emphatic performance to win his first major.

Scottie is currently riding one of the greatest hot streaks in golf history, and it’s almost Tiger-like.

Prior to the Byron Nelson, he’d won four of his last six starts on tour and gained 2.82 strokes per round on the field every time he’d teed it up this season, well ahead of the next best at 2.5.

And he’s won $10.1 million in prize money with the huge end-of-season cash bonanza still to come – on current form he should obliterate the earnings record this year.

But his no-fuss, minimal-fanfare approach combined with a humble outward demeanour probably obscures how ultra-impressive his game currently is.

He’s won at the course previously – at the significant college golf tournament called the Big12 – and in a practice round there last week he reeled off a 64 with ease.

With one major in his pocket already, expect Scottie to be contending again.

What a difference 12 months makes.

When  Phil Mickelson won the PGA Championship at Kiawah Island last year as a 50-year-old, there was a shared sense of satisfaction that Lefty got the job done.

Fast forward to this year’s PGA Championship at Southern Hills and the love and adoration for Phil isn’t what it once was.

Indeed, the defending champion might not even tee it up at Southern Hills.

While his name has been officially entered to play, Phil has spent the last three months on the sidelines following his ploy to break ranks and join the mooted LIV/Saudi Tour.

Phil appears to be serving some sort of unofficial suspension but a return to action at Southern Hills could turn the tournament into an absolute circus, something the PGA of America would be likely be keen to avoid.

Mickelson is a unique talent, beloved by fans and compelling to watch, but whether he gets to defend his PGA title is still up in the air.

Tiger and Phil, Phil and Tiger.

The pair seem to always be duelling and while Phil’s absence at Augusta was felt, Tiger’s comeback at the Masters after 13 months out of the game made it much less conspicuous.

It was an incredible return from  Tiger Woods, making the cut and remaining ultra-competitive after almost having a foot amputated following a car accident in Los Angeles.

Like Phil, Tiger’s name is on the entry list for the PGA Championship. But the 15-time major winner is likely to again leave it till the last minute before confirming his place.

Four rounds of competitive golf at Augusta stretched his surgically-repaired body to its limits and tellingly, he didn’t seem to be swinging as smoothly in the fourth round as his brilliant first round.

The good news is Tiger scoped out Southern Hills in a practice rounds a few weeks ago and contrary to its name, Southern Hills is relatively flat, which will help him no end.

Tiger won the last PGA Championship held at Southern Hills, back in 2007, and after his fairytale Masters win in 2019, you can never write him off.

Prior to teeing off at the PGA Championship at Kiawah Island last year, Harry Higgs was a bit of an unknown battler making his first major appearance.

Best known for winning the Peru Open in 2018 and the Price Cutter Championship on the Korn Ferry Tour in 2019, our man Harry seemed to capture his fair share of fans after finishing fourth on debut.

His refreshingly laidback approach, trademark sunnies and lumpy body shape combined to make him the most relatable golfer since John Daly burst on the scene at the 1991 PGA Championship.

It’s only got better since, with 30-year-old Higgs admitting he plays TaylorMade P770 game improvement irons to make the game easier.

And at the Phoenix Open in February, Harry went shirtless at par three 16 th party hole, an act that pushed the already raucous crowd into overdrive.

But after finishing tied for 15 th at his Masters debut in April, it’s clear Higgs relishes the big moments and will be a force at Southern Hills.

And if you needed any more reason to get behind Harry Higgs, his favourite drink is… vodka and water.

As expected,  Cameron Smith was in the hunt at the Masters in April; one of the form players of the season seeking his first major title.

Playing alongside Scottie Scheffler in the final group on Sunday, Smith had closed within striking distance after a birdie at the tough 11 th.

Smith never looked comfortable on the tee, backing off before mis-hitting his nine iron short into Rae’s Creek.

He would putt out for triple bogey and fall six shots off the lead, his heart ripped out as he played the rest of the back nine numb with disappointment.

For some players, the layer of scar tissue that comes with such a mistake could take some time to shake off. But affable and laidback Cam seems to be the kind of character who could front up next week with complete freedom in the mind – and with a killer instinct that is even sharper.

2021 US Open champion  Jon Rahm could be forgiven for thinking his time in the spotlight as the world’s best golfer ended a little abruptly.

Rahm ascended to world No.1 after winning the US Open at Torrey Pines and his run of stellar play continued deep into last year.

After shooting a record 33-under, Rahm still finished second to Cam Smith at the Tournament of Champions to kick off 2022. And despite being in contention in many tournaments since, the Spanish superstar just could seem to land in the winner’s list.

Never a factor at the Masters, things took a turn for the better for the world No.2 down in Mexico in early May.

The drought was broken as Rahm held on for a one-shot victory at the Mexico Open, his seventh win on the PGA Tour.

They say winning your second major is easier than winning your first. Now that Rahm has got that winning feeling back, will Southern Hills be his place to shine?

It was Tiger Woods’ second round 63 that ultimately won him the 2007 US PGA at Southern Hills but the tournament was also memorable for the baking heatwave that persisted throughout the week.

All four days of tournament play saw hot and humid conditions, as the thermometer hovered around 38˚C to test the world’s best golfers.

Northern Ireland’s Darren Clarke reputedly downed 15 bottles of water during his first round but the most effective method of remaining fresh went to John Daly.

Daly avoided the heat during practice rounds early in the week, preferring to play slot machines at a nearby casino and hydrate with Diet Cokes.

And it worked, with the then 41-year-old shooting 67 in the first round.

In 2007 the PGA was played in August before the tournament shifted to its current date in mid-May.

The good news for players at Southern Hills this year is Oklahoma will be much milder in May and it’s been wet leading up to the tournament.

You can never discount  Dustin Johnson at a major and leading into Southern Hills the signs are good.

DJ makes the game look incredibly easy when he’s in full flight, especially when his wedge game - probably the key to his scoring - is on song.

And he seems to have ironed out some of his issues with his driver; the new TaylorMade Stealth+ driver appears to be a good match for his power game.

After finishing 12 th at the Masters, DJ could be poised to add a third major to the trophy cabinet at the PGA Championship.

Jason Day, who won the 2015 PGA Championship, went close to breaking through at the Wells Fargo Championship a couple of weeks ago, his first flash of form in a long time coinciding with a return to his red TaylorMade Spider putter.

And perennial top Aussie Adam Scott made a putter change at the Bryon Nelson, playing a new L.A.B. prototype in a bid to sink some more putts.

If either Day or Scott get their new putters performing, it’ll make Southern Hills’ tricky greens a whole lot easier.