TOURNAMENT UPDATE 18/07/2021: Congratulations to Collin Morikawa, who won the famous Claret Jug at Royal St George’s in what was his first British Open.

Morikawa shot a four-under 66 to finish at 15-under par for the tournament. The 24-year-old American was two strokes ahead of runner-up, countryman Jordan Spieth.

It was another near miss for South Africa’s Louis Oosthuizen, the leader heading into the final round.

Playing alongside Morikawa, Oosthuizen finished third at 11-under but was the only player in the top 15 to shoot over par in the fourth round. 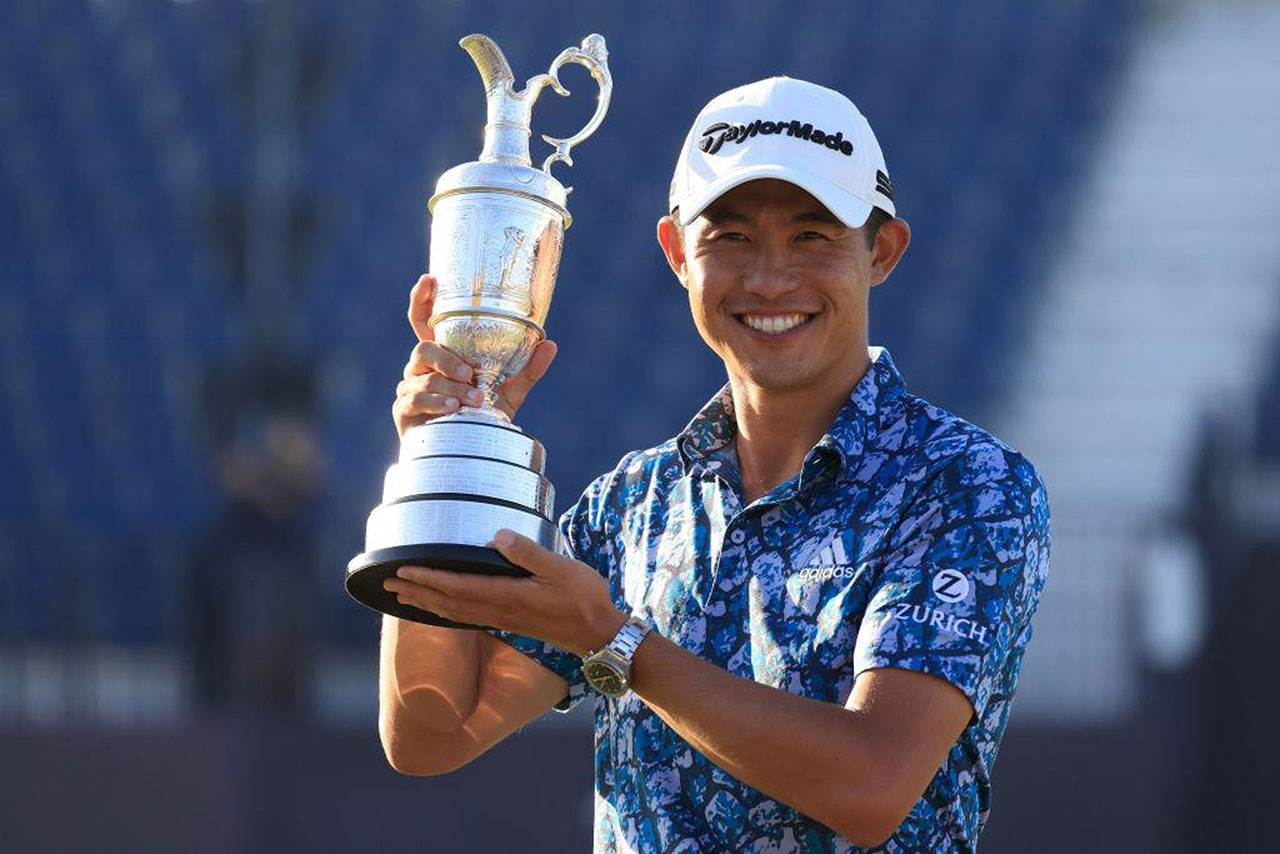 The Claret Jug is back up for grabs when the British Open Championship is played at Royal St George’s in England, July 15-18.

Here’s what’s happening in the final major of 2021. 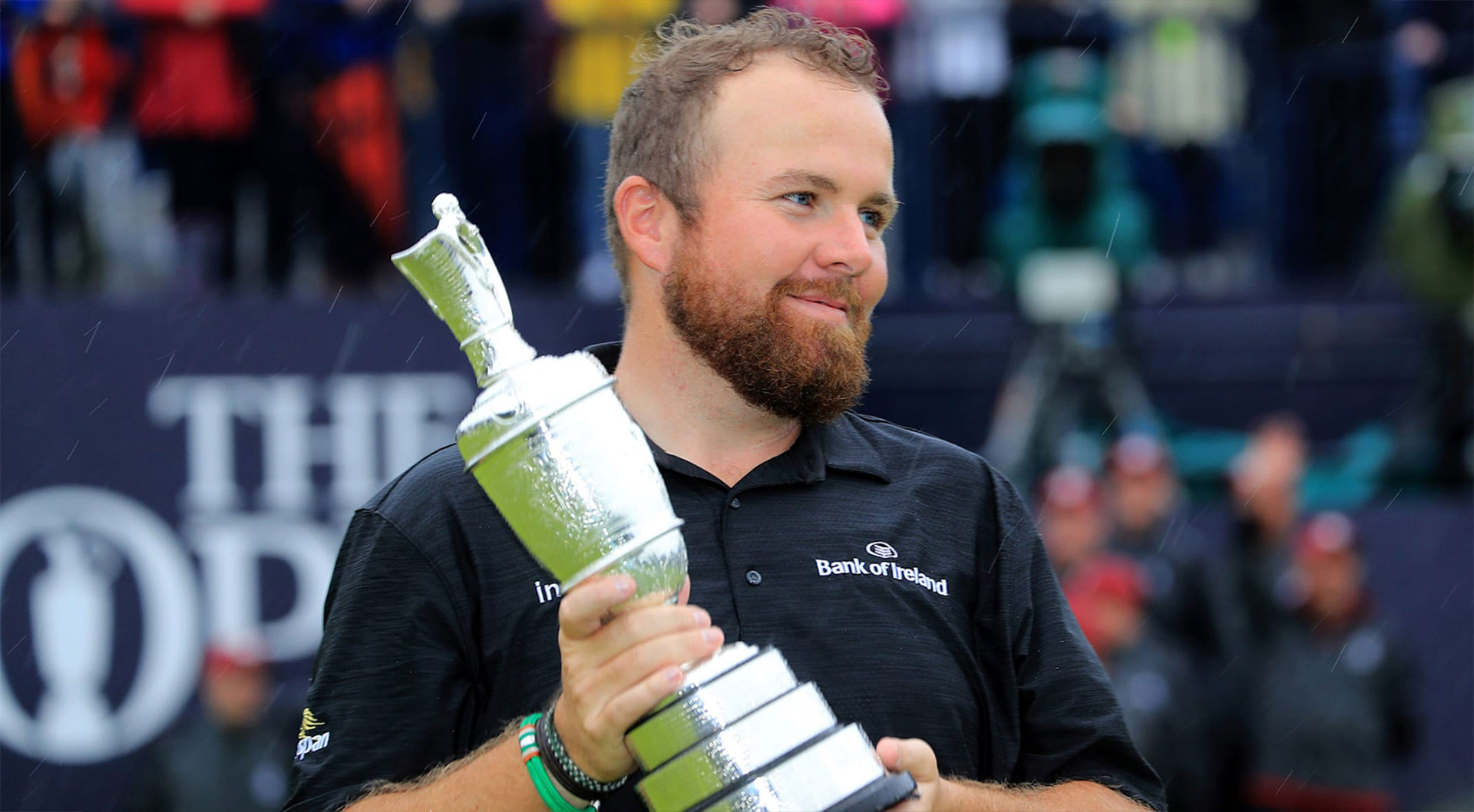 Irishman Shane Lowry has enjoyed an extended stint as the defending Open champion, having kept the famous Claret Jug for an extra year after last year’s Open was cancelled.

It’s fair to say he celebrated his win at Royal Portrush in 2019 with significant enthusiasm, which is more than reasonable after winning your first major on home soil.

But after a bit of a dry run following the victory, he’s again found some serious form.

If the Irishman can again produce his links golf mastery like he did at the 2019 Open, he will become the first player since countryman Padraig Harrington in 2007 and 2008 to win consecutive Open Championships.

Royal St George’s is the southernmost course on the Open roster and it will host the Open Championship for the 15 th time this year.

Built in the dunes of Sandwich, near Kent, the course abuts the English Channel and like every links course, the wind blowing in off the sea is the course’s main defence.

And depending on how the English summer pans out, it could also get firm, fast, brown and fiery to make life very difficult for the world’s top golfers this year.

Scoring has traditionally been tough, with Greg Norman’s 13-under total in 1993 the only winning score better than five-under in the last five Opens held at the course.

It is expected to play at just over 7200 yards this year and the last time the course held the Open, Darren Clarke broke through to claim his first major at the age of 42.

While Clarke’s was a universally popular win in 2011, the 2003 Open at Royal St George’s in remembered more for the man who lost it.

Denmark’s Thomas Bjorn was on track to win but found the right greenside bunker on the 16 th, from which he twice blasted out of the sand only to see his ball roll off the green and back in the bunker.

It gifted American Ben Curtis the Claret Jug in 2003 and Bjorn would rue his best chance to claim a major. 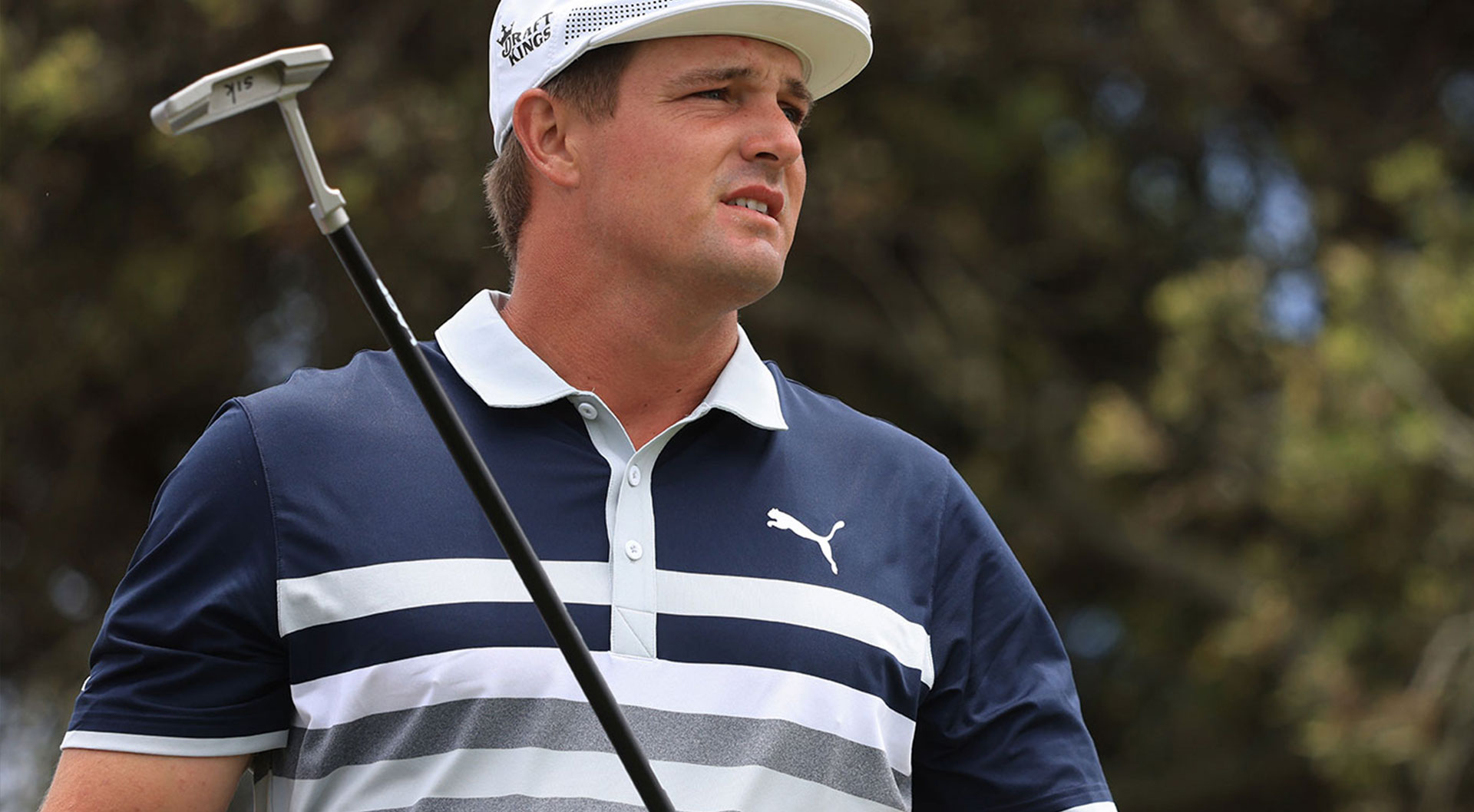 With nine holes to go at the US Open at Torrey Pine,  Bryson Dechambeau was exactly where most pundits thought he’d be – in possession of the lead and poised to win his second-straight US Open.

But golf has a funny way of messing with the script.

Bryson refused to call it a meltdown but clearly, things just didn’t go his way – there were errant tees shots, a shank from a plugged lie, and a quadruple bogey that ultimately killed off Bryson’s chances.

And things got downright weird when he had to pause on the back nine while an on-course streaker was arrested before one of his drives finished up sitting beside a beer box left in the rough.

Bryson has had a complicated relationship with the Open Championship, with his best result a tie for 51 st in 2018 at Carnoustie.

It remains to be seen whether his bomb-and-gouge approach will mesh with the nuances required at a links course, where balls bound upon landing instead of stopping dead like most other tracks in the US.

But if it all lines up for Bryson, he’s going to be a massive threat at Royal St George’s.

Of all the majors, none are more susceptible to being decided by the draw than the Open Championship.

You just don’t know what the weather will produce in Open week: one day it could be bright sunshine, warm and dead calm; the next could bring pounding wind and driving rain.

In many ways it’s what makes the tournament unique but for the players, getting on the wrong side of the draw weatherwise will see their winning hopes evaporate quickly.

After missing the cut at the weather-affected Open 10 years ago, Rory McIlroy said that he’s "not a fan of golf tournaments that the outcome is predicted so much by the weather. It's not my sort of golf."

Considering McIlroy grew up playing golf in Northern Ireland, where the weather is extremely variable, it showed just how much a bit of bad luck can affect a player’s mindset.

When half the field gets stuck on the wrong side of the draw, the Open suddenly becomes much more of a mental test and learning to roll with the punches when playing in the worst of the conditions is a big part of the Open Championship experience.

AUSTRALIANS IN THE OPEN

Nine Aussies will tee it up at this year’s Open and hope to repeat Greg Norman’s famous 1993 win at Royal St George’s.

Aaron Pike qualified after finishing third at the 2019 Australian Open while Brad Kennedy topped the Australasian Tour order of merit to earn his spot.

Jason Scrivener qualified on his European Tour Race To Dubai ranking while Deyen Lawson did it the hard way by working his way through several qualifiers to earn a start in his first major.

Marc Leishman looks to be the Aussie most likely this year, after he flew home to finish third at the Travelers Championship last month.

Leishman is also no stranger to playing well at the Open, finishing in the top six at three of the past six editions of the major, including losing in a three-way playoff (Zach Johnson won, with Louis Oosthuizen finishing runner-up with Leishman) at St Andrews in 2015. 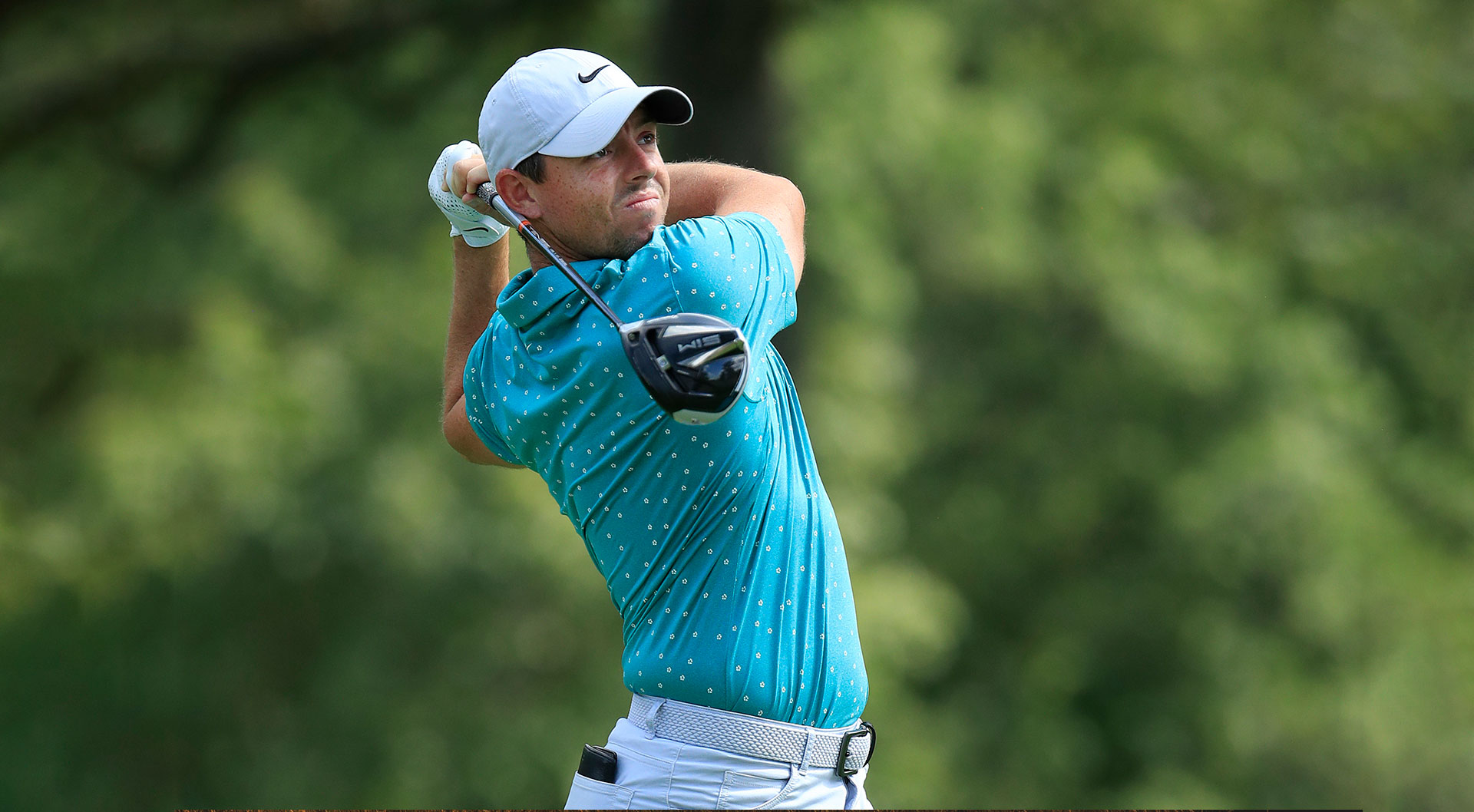 Oh Rory! It was looking like Rory’s time was coming at the US Open after he’d played his way into contention for the final day.

But unfortunately, things didn’t pan out for  Rory McIlroy in the last round, leaving everyone wondering when the 32-year-old from Northern Ireland will break through and win his first major since 2014.

Rory grew up playing links-style golf and he’s a previous Open winner, having won the Claret Jug at Royal Liverpool in 2014.

Despite failing to make the cut in front of his home fans at Royal Portrush last time, he’s going in as one of the fancies this year.

The last time Royal St George’s hosted the Open a player from Northern Ireland proved a cut above.

Can Rory channel a bit of Darren Clarke circa-2011 this year?

One of the hardest holes at Royal St George’s will be the fourth hole, a tricky par four that carries the dubious distinction of featuring the deepest bunker of any of the Open courses.

It’s called the Himalaya bunker and is situated on a tall dune down the right side of the hole.

It’s cavern-like qualities are hard not to notice while on the tee but all the players will be able to fly their drives straight over it.

It almost certainly won’t be in play, unless a gale-force wind is blowing straight into the players’ faces.

The big challenge on the fourth hole comes with the approach shot into the angled green, which has out-of-bounds staked just over its back edge.

It’s certain to catch more than a few players out this year, especially if it’s windy.

And another interesting Royal St George’s fact: the third hole features the only tree on the course – an underwhelming specimen situated on the right side of the putting surface.

Fresh off his first major win at the US Open at Torrey Pines,  Jon Rahm will head to Royal St George’s full of confidence.

The Spanish superstar made two crucial putts on the final two holes but winning a US Open has always been about minimising mistakes – something Rahm did so well.

He showed immense maturity on his final hole when he played his greenside bunker shot well right of the hole to minimise his chances of making a bogey.

He’s in sublime form ball striking wise but the Open Championship will put him under the microscope.

Rahm finished tied 11 th at Royal Portrush in 2019, a year after his Carnoustie meltdown when he put on a fair display of club-throwing when missing the cut.

However, his US Open performance showed his newfound control and it seems the petulant outbursts are now a thing of the past.

Rahm has won the Irish Open twice and is comfortable playing on a links course.

He is a deserved favourite to become the first back-to-back major winner since Jordan Spieth in 2015.

The last two Opens have been won by Europeans – Shane Lowry and Francesco Molinari – and going on form it would seem Jon Rahm is poised to make it a hat-trick.

But looking at Viktor Hovland’s impressive resume, it could be the Norwegian who is heading for a big showing.

The 23-year-old will make his Open debut at Royal St George’s and is ranked 14 th in the world after winning the European Tour’s BMW International in Germany last month.

His game has major winner written all over it and he’s enjoyed a successful season so far on the PGA Tour, winning once and notching a pair of runner-up and third-place finishes.

While he hasn’t fired in any of the majors this year, things seem to be trending in the right direction for Hovland, who single-handedly is putting Norway on the golfing map.

And finally, for every punter thinking of backing  Dustin Johnson, Brooks Koepka, Justin Thomas or Jordan Spieth to win the Open Championship, the tournament has a tendency to throw up the odd upset winner now and then.

In 2010 Louis Oosthuizen waltzed to a seven-stroke win at 200-1 odds, just a few years after Americans Ben Curtis and Todd Hamilton won at huge odds in consecutive years.

Add in Darren Clarke’s 200-1 win in 2011 and it seems like an underdog fairytale is more likely to happen at the Open Championship than any other major.

It could well be slightly unfamiliar names such as Justin Harding, Takumi Kanaya, Mike Lorenzo Vera, Brendan Todd and Aaron Wise - all around the 200-1 mark - who have their name immortalised on the Claret Jug this year.