Crafted in Carlsbad, California, Evnroll putters are the brainchild of Guerin Rife, one of the brightest minds in golf club design and a true innovator.

Rife is, by and large, a problem solver; a gifted outside-the-box thinker whose passion for inventing solutions is legendary in the putting game.
And just like their creator, Evnroll putters are also problem solvers: flat sticks that provide creative and inventive solutions to those particular green-specific problems that can befuddle even the best putters.

Whether it’s issues with aiming and alignment, strike and speed control, or stroke path and face rotation, there’s an Evnroll putter that can help.
The Evnroll putter range consists of the highly-versatile V-Series, which offers four interchangeable hosel types, the Midlock line-up, which reinvents the armlock putting technique, and the Classics range, a collection of some of Evnroll’s most popular putter models.

Smooth, consistent and versatile, Evnroll putters will have you owning the greens once again. 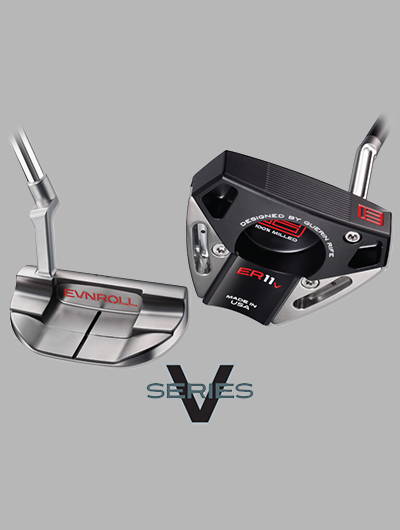 The Midlock concept improves the armlock putting technique through an ingenious system that maintains angles effortlessly. 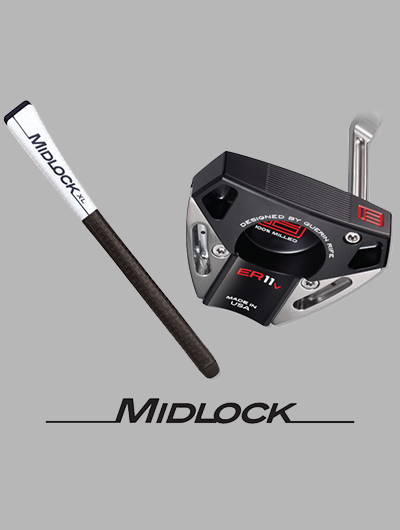 A collection of Evnroll’s most popular models. Tried, tested and treasured, they’re the putters’ players keep coming back for. 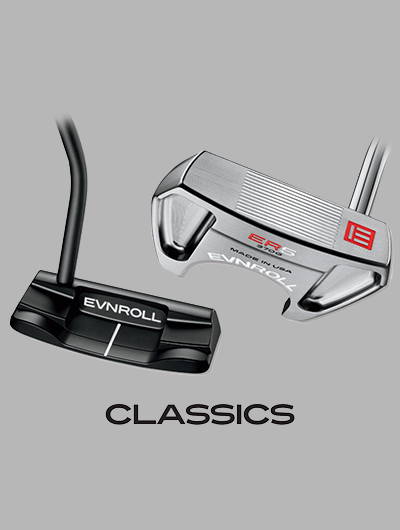 A common gripe Evnroll co-founder and chief designer Guerin Rife regularly encountered was that putter faces were just too inconsistent.
Players were alarmed when strikes out of the sweet spot jumped off the face at considerable velocity but when a strike drifted ever-so-slightly towards the heel or toe, the ball would instead dribble off the face.

Speed is key to holing putts - as the saying goes, never up, never in.

So Rife created something that would appease the multitude of unhappy golfers. Evnroll’s Sweetface groove pattern features grooves that are wide in the centre before narrowing in width towards the heel and toe areas. It has the effect of reducing the pace of putts out of the centre while boosting the speed out of the heel and toe areas – effectively standardising the transfer of energy across the putter face to deliver a uniform roll speed.

As the Sweetface name suggests, it’s like having one giant sweet spot that produces a consistent speed, regardless of where the strike occurs. Sweetface technology features on every putter in the Evnroll range. 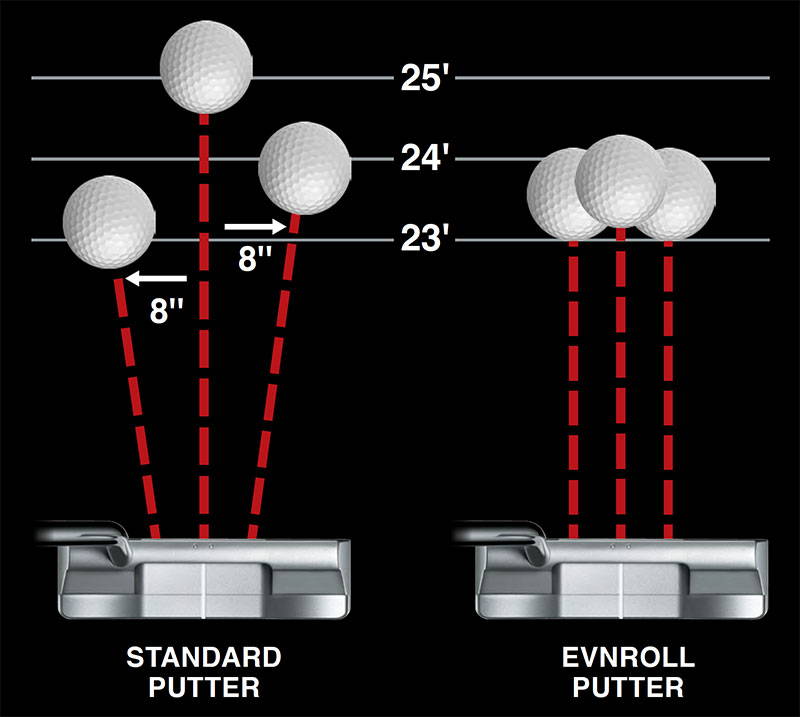 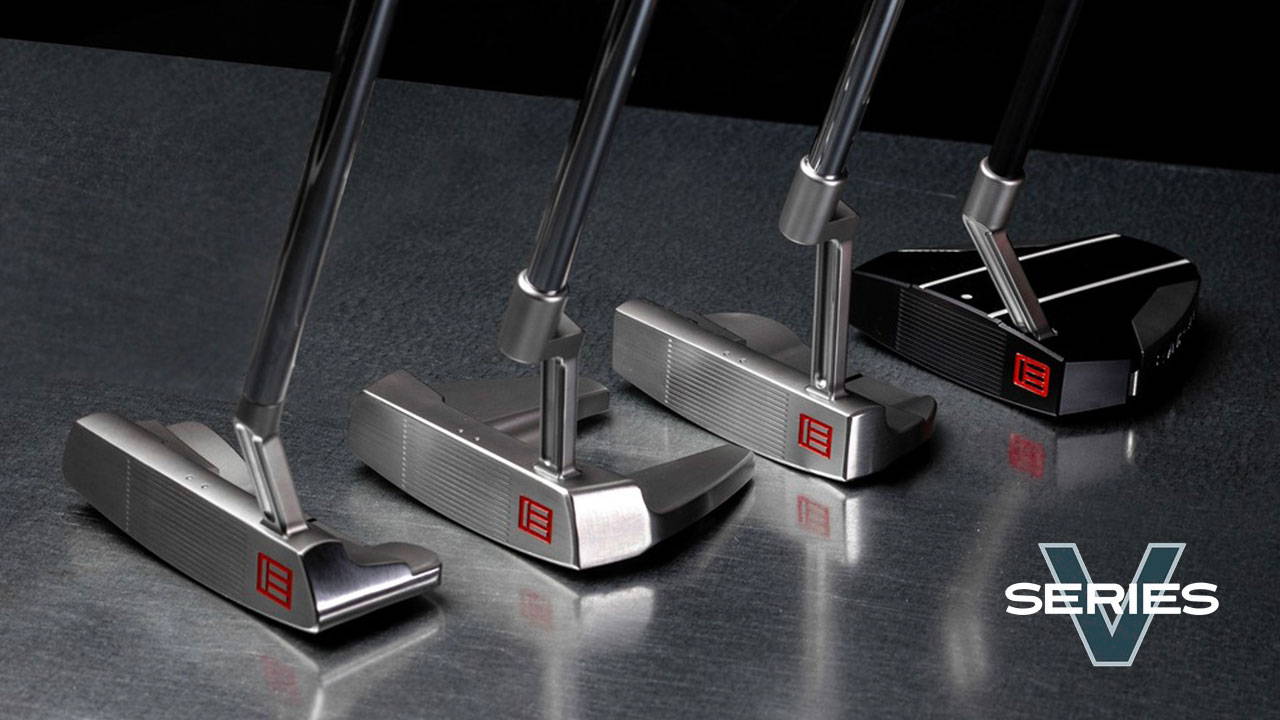 The V-Series is all about versatility, with a selection of six putter heads and four different hosel types offering a range of performance that encompasses the entire player spectrum.

It’s designed to give golfers the best chance of holing more putts by providing them with the optimal Evnroll putter-hosel combination to suit their stroke.
Whether you have a neutral stroke that is close to straight-back-and-through or more of an arcing stroke that opens and shuts the face to varying degrees, you’ll be able to customise your optimal V-Series putter head-hosel combination.

Each of the four hosels – short slant, long slant, short plumber’s neck and long plumber’s neck – will produce different degrees of toe hang across each of the V-Series’ six putter heads. The Shaft length and Grips can all be customised in the V-Series to create a highly personalised putter.

THE TRUTH ABOUT TOE HANG

If you’re wondering what toe hang is and why it’s important, read on.

Toe hang influences how readily a putter face will open and close during a stroke. More toe hang will generally suit arcing strokes; less of it will suit straight-back-and-through strokes. A putter without any toe hang is called a face balanced putter.

Here’s how the V-Series hosels compare: 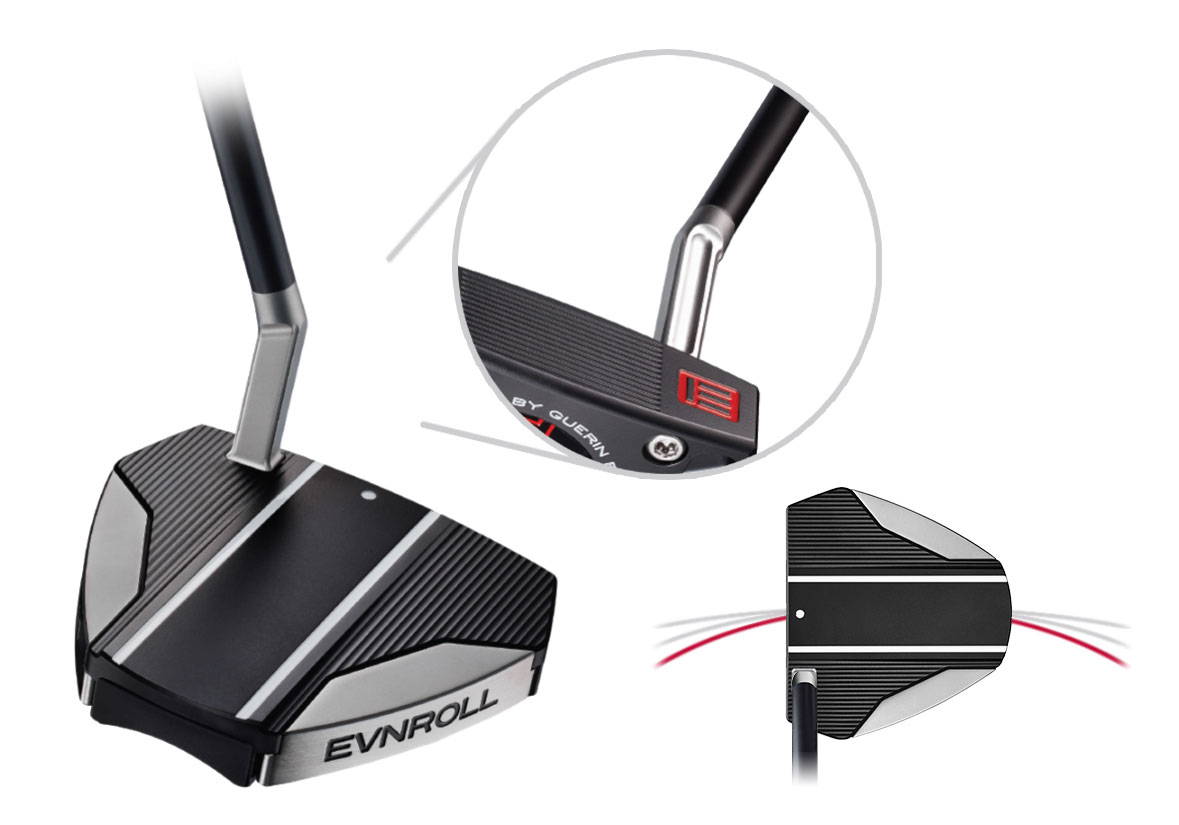 The Short Slant produces the most toe hang of the four options. Suits arcing strokes that open and shut the putter face significantly. (Full Arc) 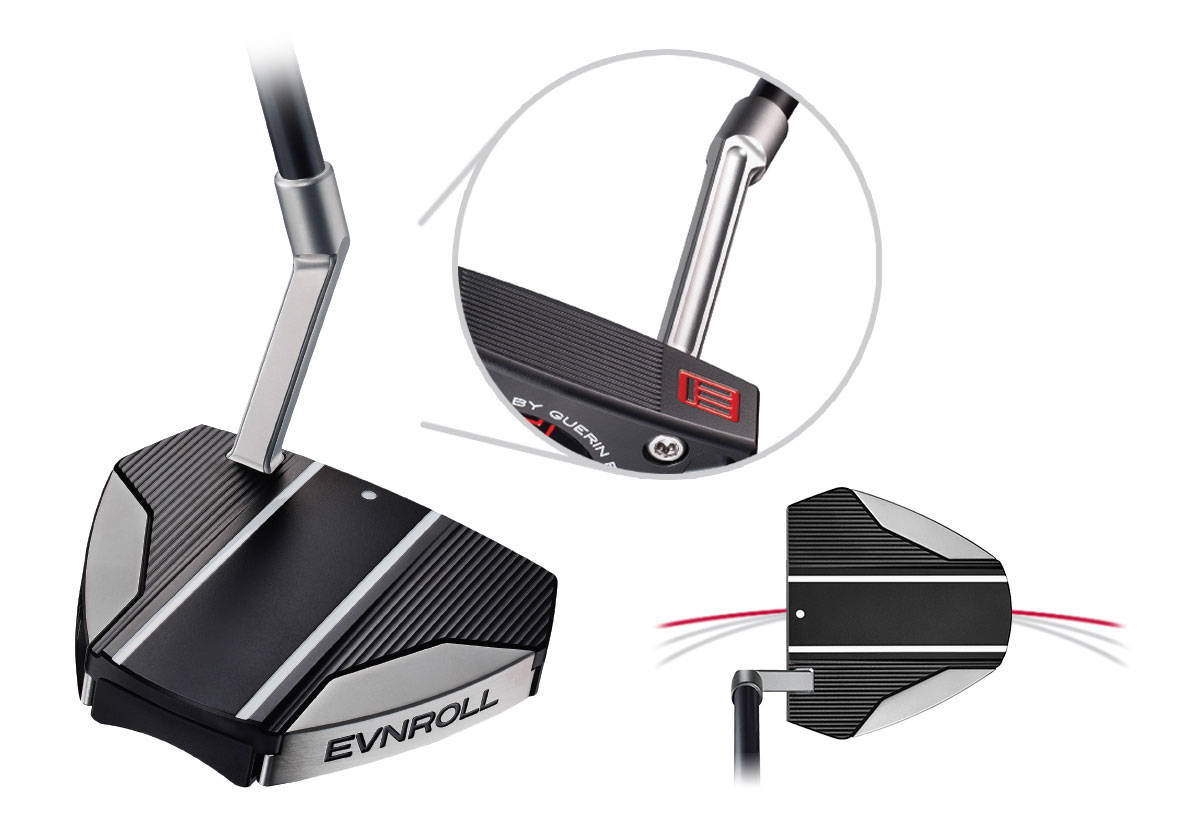 The Long Slant will complement a minimally arcing stroke, with moderate toe hang. Features a two-shaft offset and an extra two degrees of loft. (Slight Arc) 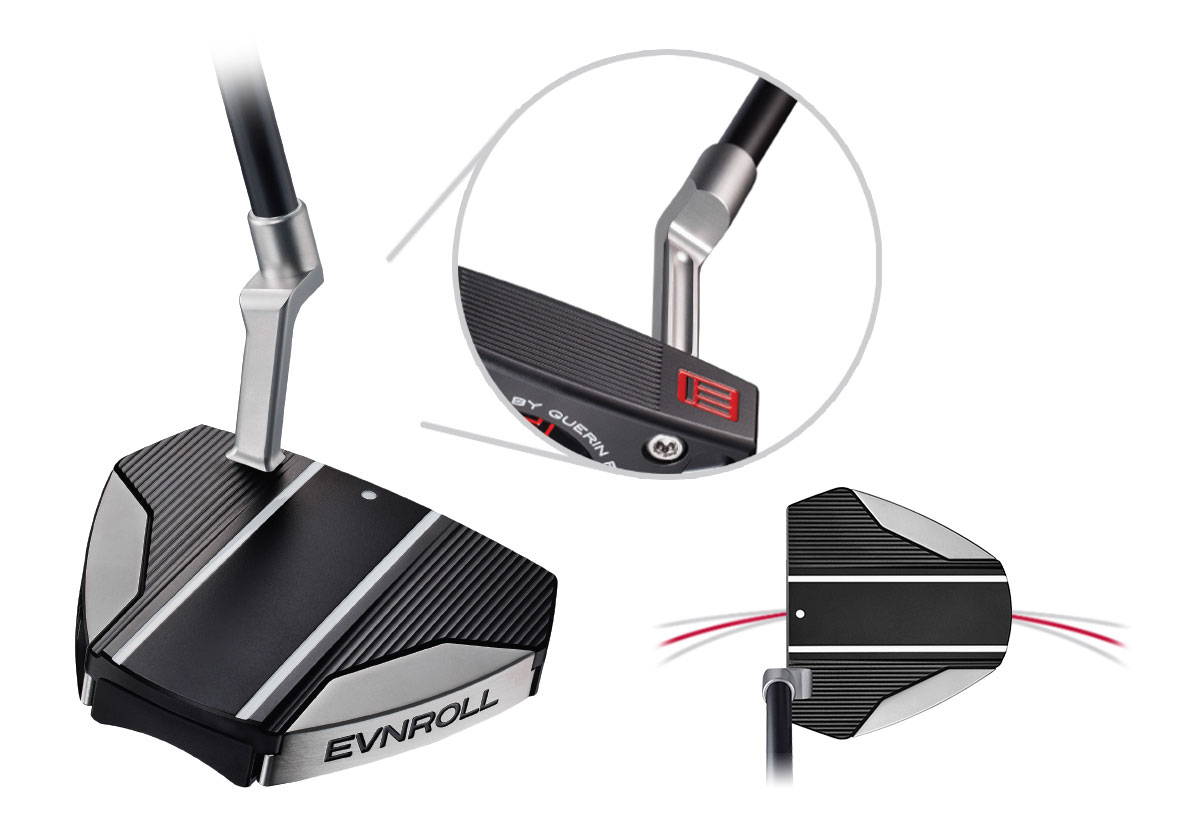 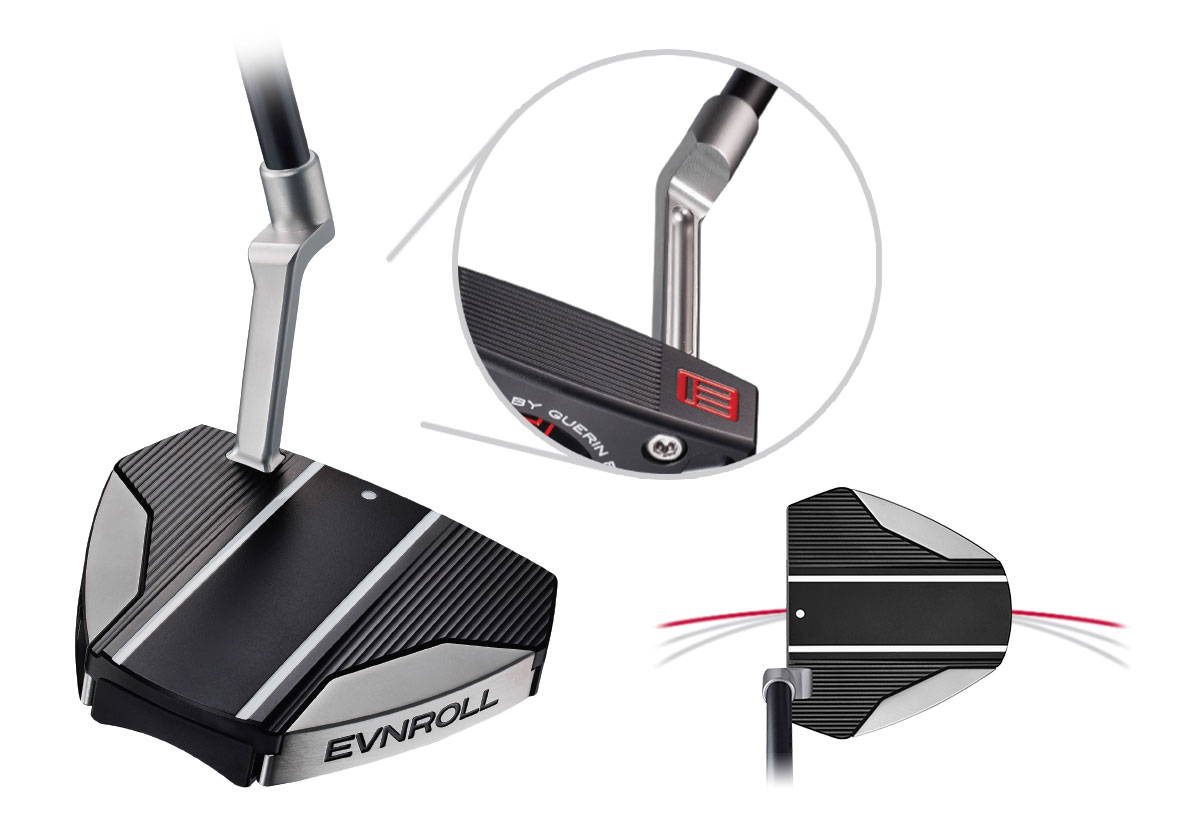 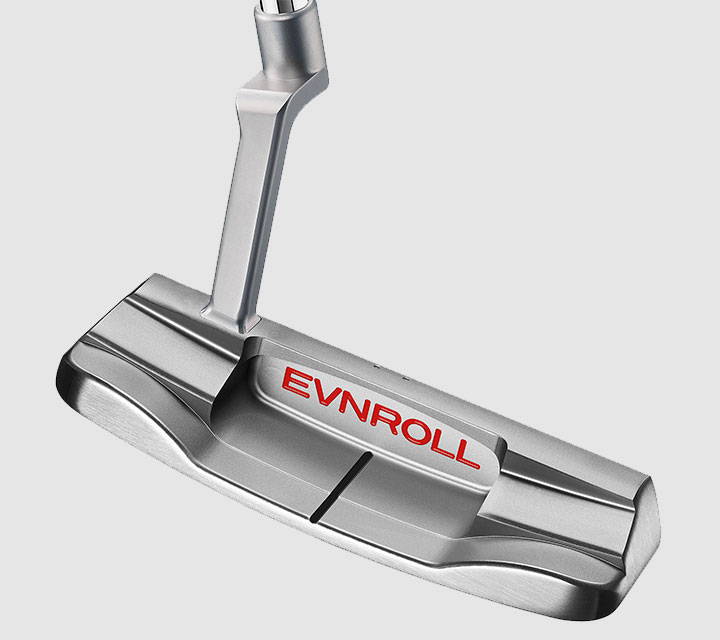 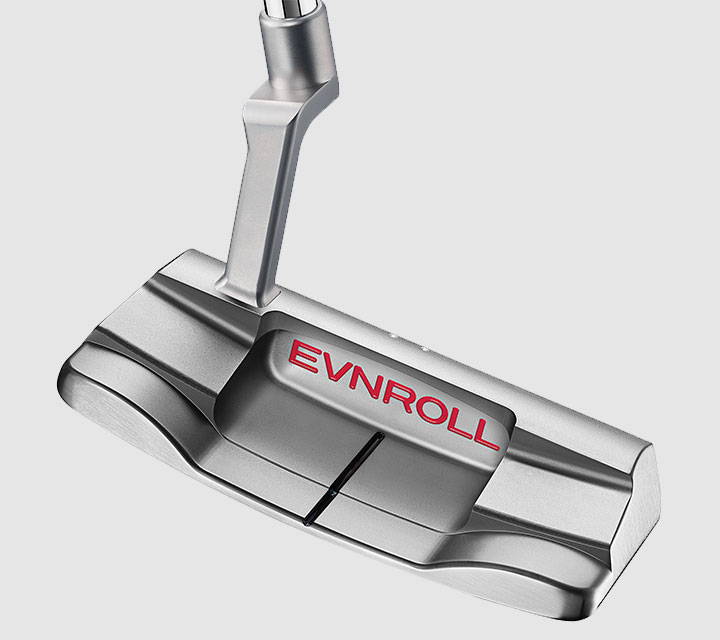 A modernised version of the classic Anser shape, the ER2V is a highly effective mid-blade. Features a single sightline and a wide sole that enhances its heel-toe weighting. 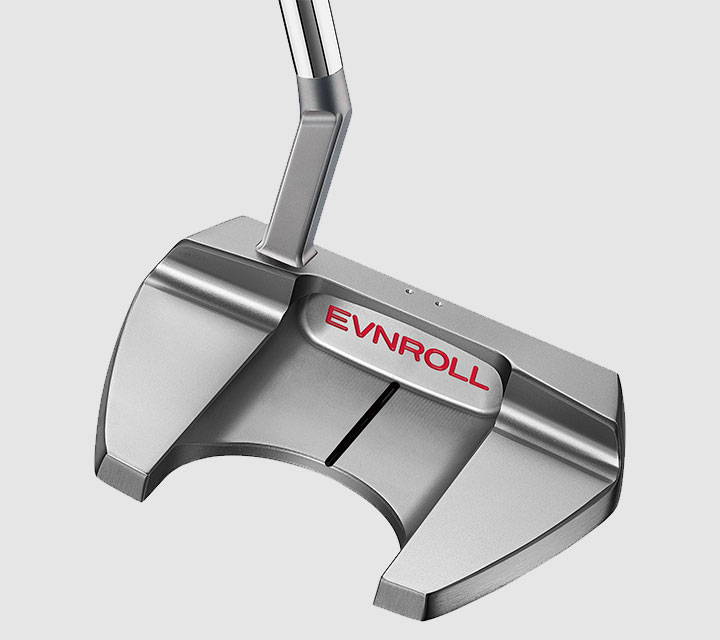 A popular heel-toe weighted mallet known as the Hatchback, the ER5V’s winged design enhances stability while a single sightline frames the strike zone to aid alignment. 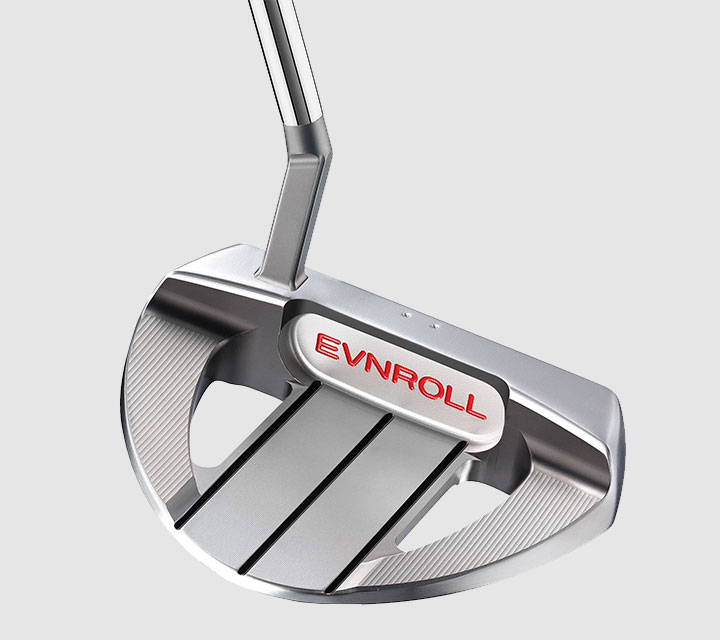 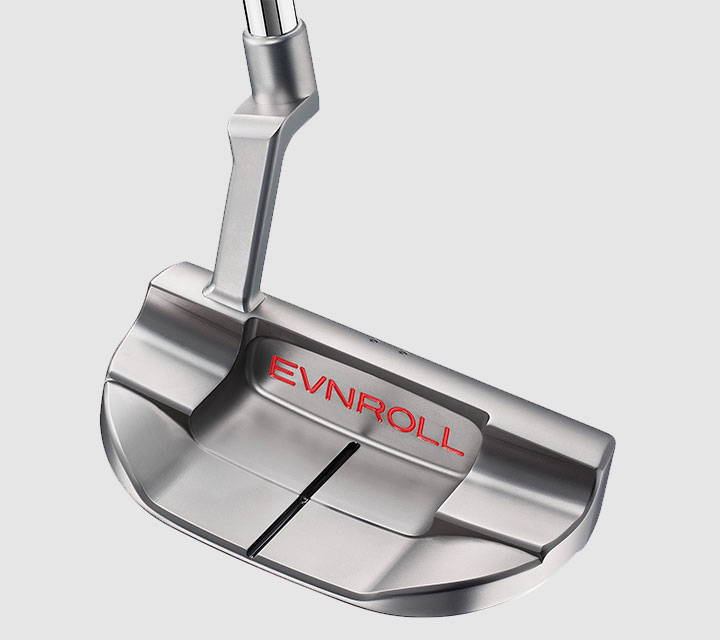 Squared-backed mid-mallet that offers perimeter-weighted performance in a compact head shape. A single sightline runs the length of the rear for an unobtrusive facade. 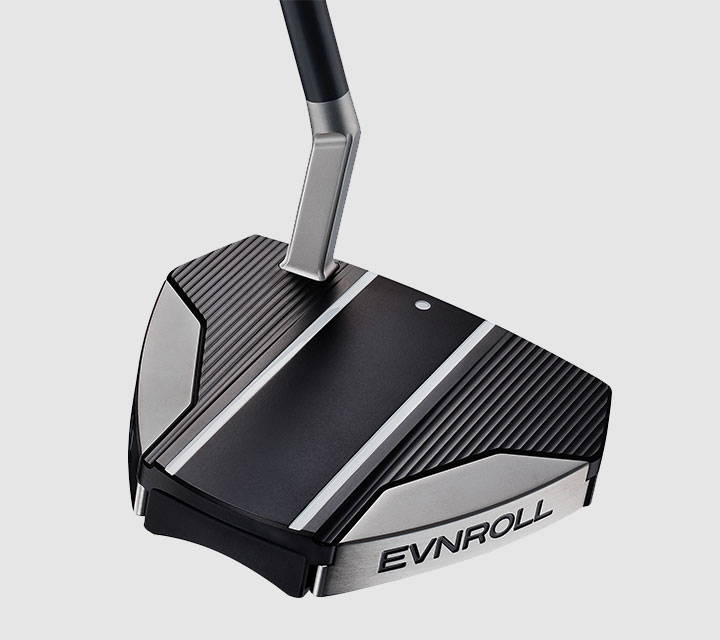 As the popularity of the armlock putting method surges, Evnroll has produced a range of putters that streamline the technique with a more user-friendly approach.

Armlock minimises the use of the arms and wrists in a putting stroke but often requires custom made shafts and lofts to be fitted to an existing putter model.

However, the Midlock range from Evnroll has simplified the process through an ingenious new grip, shaft and the Evnroll Long Slant hosel, which has a two-shaft offset and increases loft by two degrees.

The unique Midlock pistol grip features the maximum dimensions allowed under USGA rules and is only six inches longer than a conventional putter grip.

But the butt end of the grip has been positioned sideways, enabling it lock into the leading forearm more vertically and promote a one-piece putting stroke that retains all the angles.

In combination with Evnroll’s Long Slant grip, the Midlock grip reduces putter loft to just four degrees – similar to a forward press – which is well below the conventional nine degree loft commonly found in armlock putters. 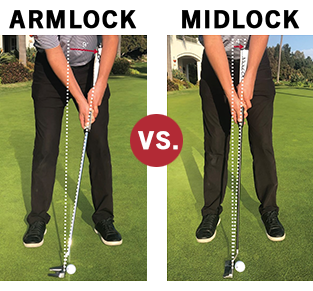 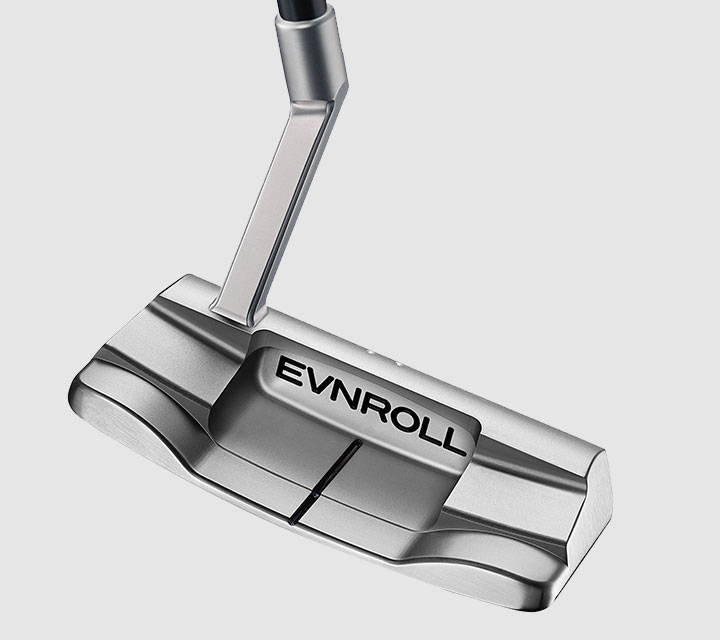 A modernised version of the classic Anser shape, the ER2V in Midlock configuration is a highly effective mid-blade. Features a single sightline and wide sole, which enhances its heel-toe weighting. Toe hang: 23°. 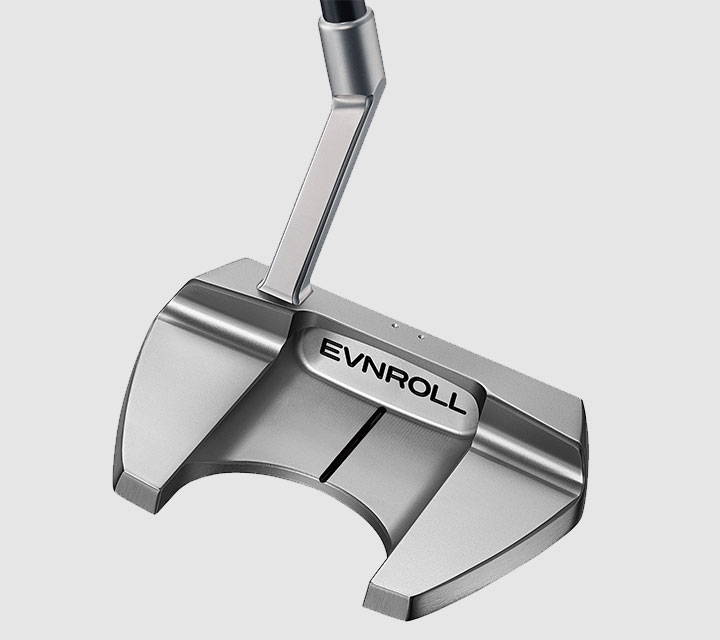 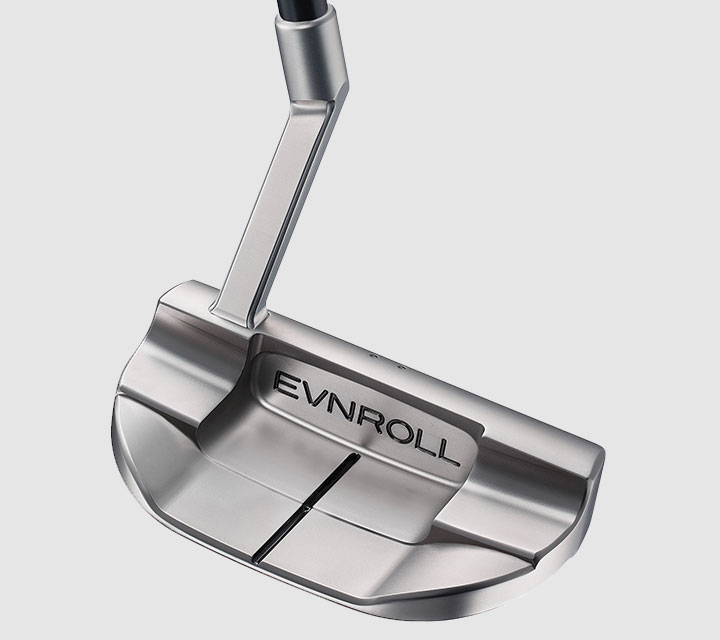 Squared-backed mid-mallet that offers perimeter-weighted performance plus all the benefits of a Midlock configuration. A simple single sightline runs the length of the putter’s squared off rear section. Toe hang: 20°. 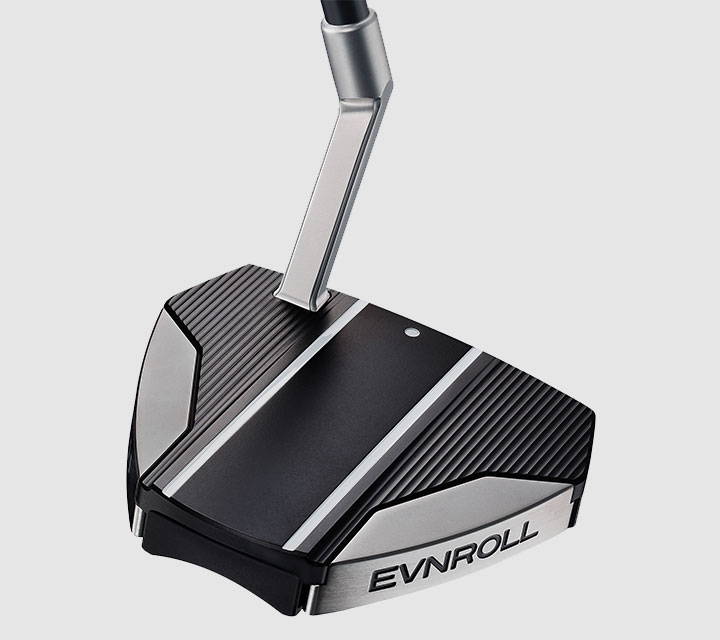 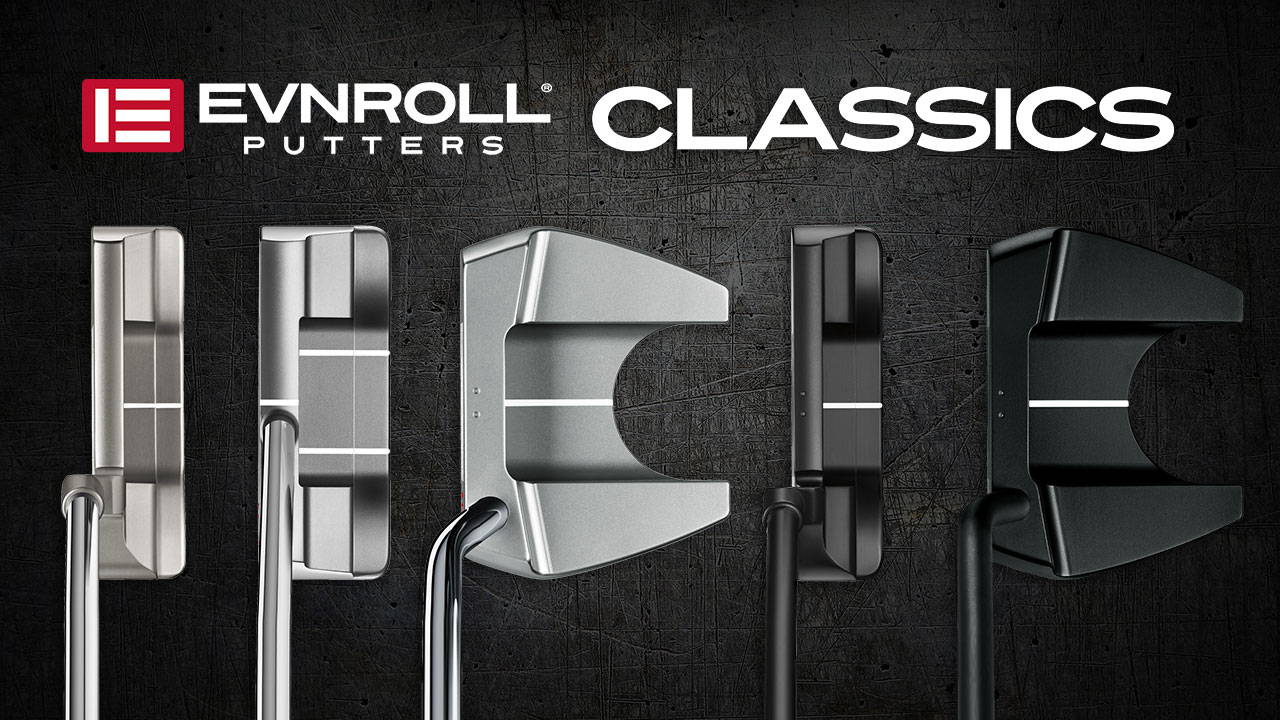 They’re the Evnroll putters that players keep coming back for and it’s easy to see why.

A collection of beloved mallets and elegant blades, the Classic line-up dials up the performance via Sweetface technology in an assortment of grip and hosel varieties. 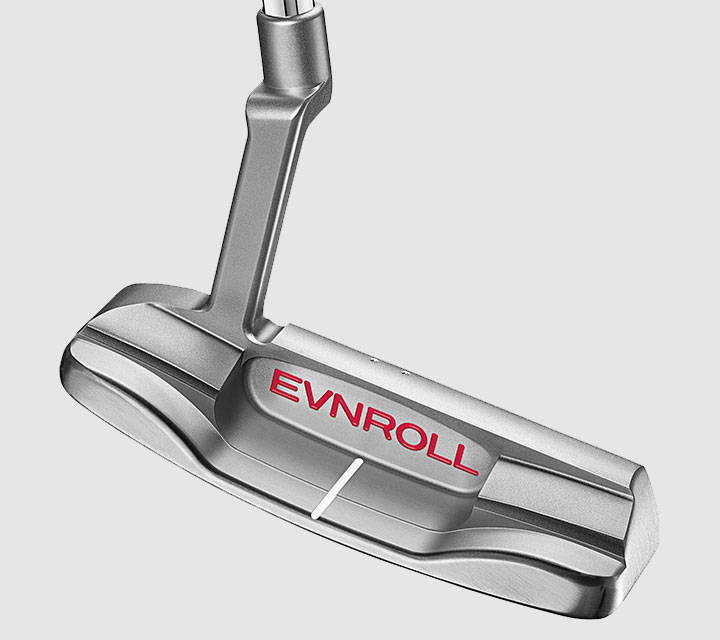 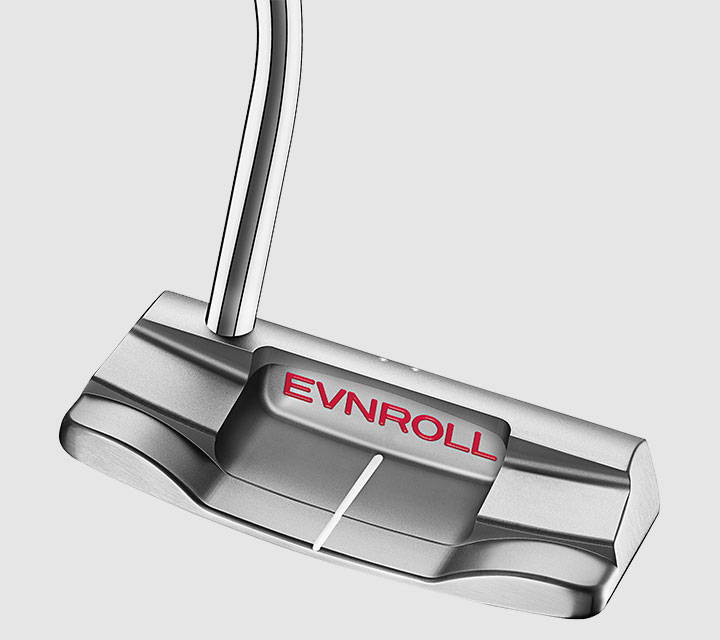 A modernised version of the classic Anser shape, the ER2 mid-blade features a wide sole that enhances its heel-toe weighting. A single bend shaft produces 22° of toe hang. (RH/LH) 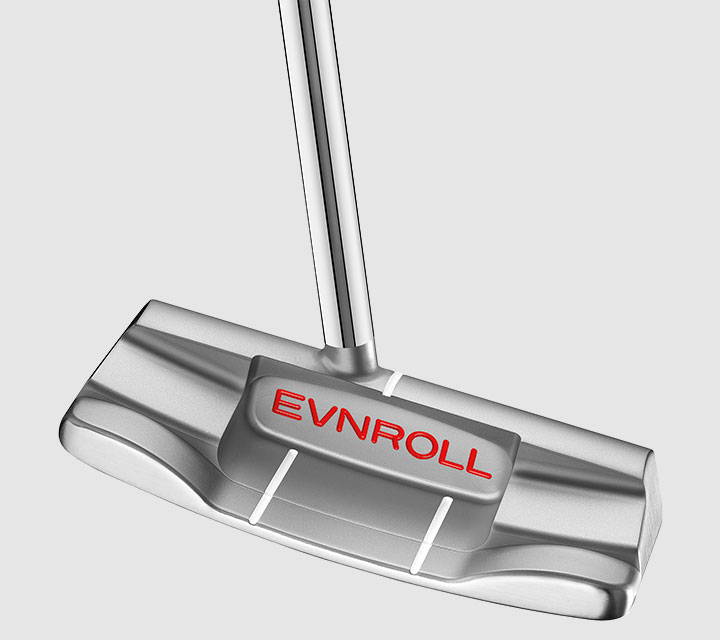 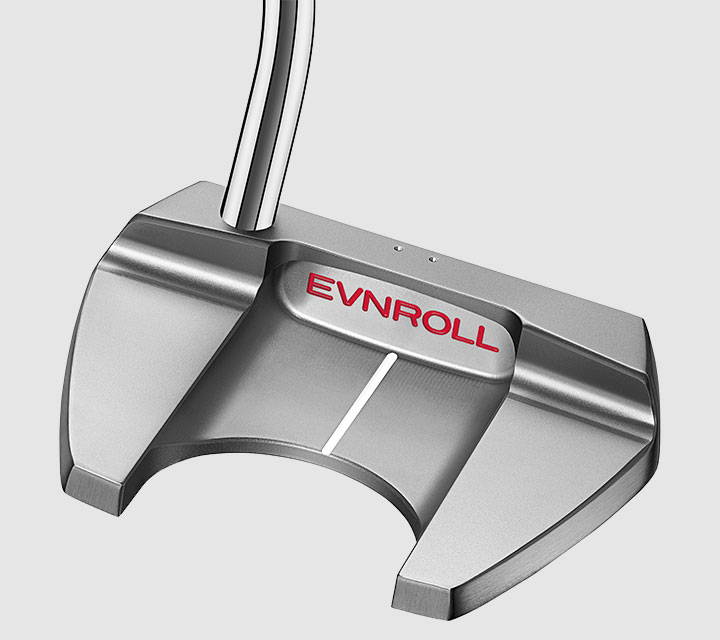 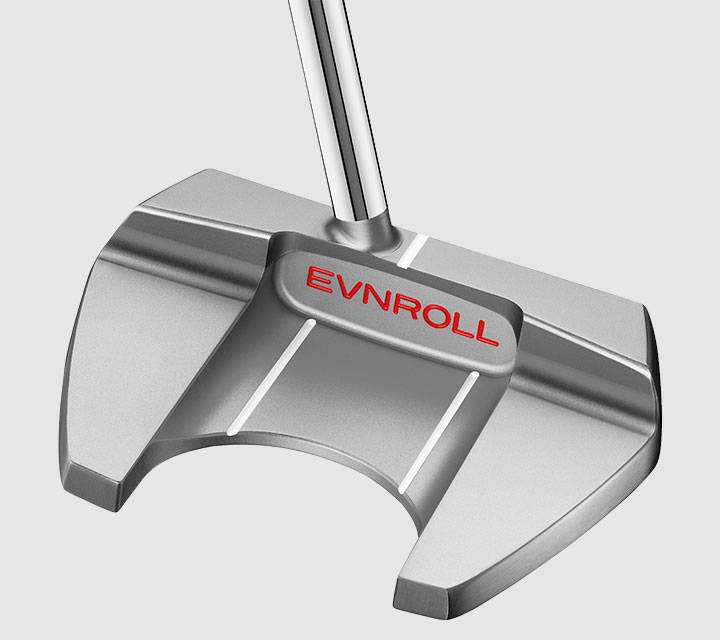 Centre-shafted version of the popular heel-toe weighted mallet known as the Hatchback. The winged design enhances stability and the centre-shafted configuration produces 10° of toe hang. 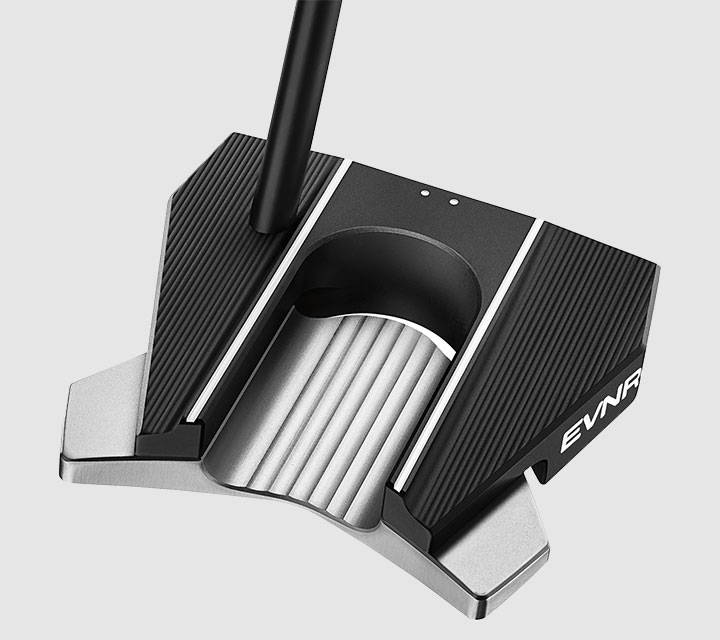 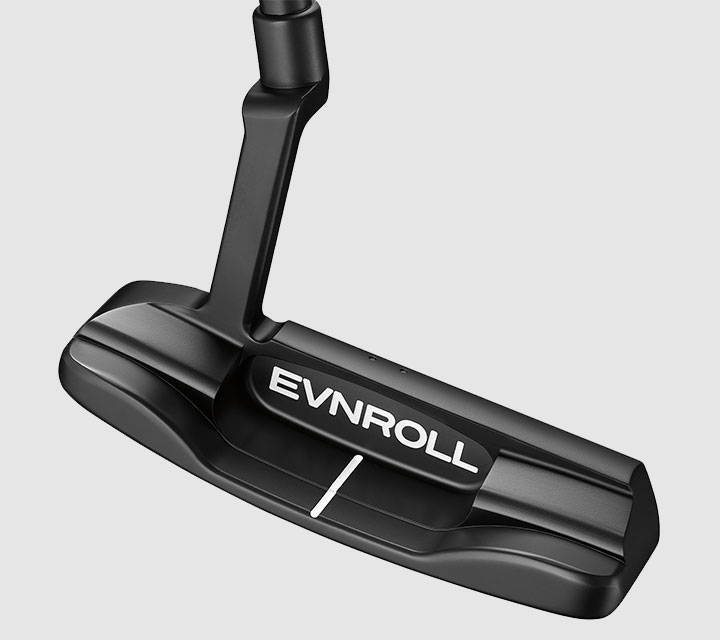 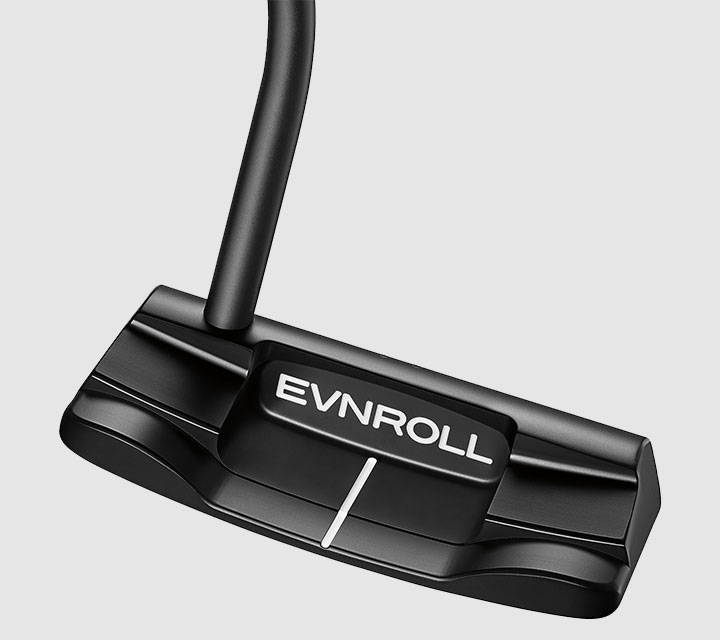 A modernised version of the classic Anser shape, the ER2 mid-blade features a wide sole that enhances its heel-toe weighting. A single bend shaft produces 22° of toe hang. 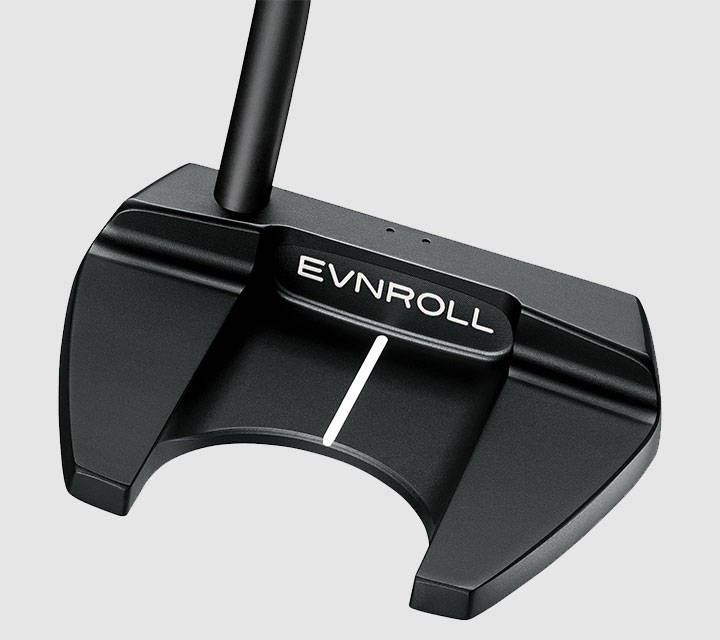